A Guide to UCSC Athletics 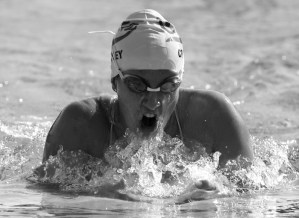 Odds are you didn’t decide to come to Santa Cruz so you could go out on a Friday night with your face painted in blue and yellow to cheer for the home team. But don’t think that just because this campus doesn’t house a big, buzzing stadium and a fiery football team that you won’t have the chance to wear the university colors and do the wave amongst a crowd rooting for the mighty Slugs.

Contrary to popular belief, UCSC is home to a number of sports teams as well as many talented athletes who have helped lead some of those teams to great success over the years. Whether it’s sitting on the sidelines watching the soccer team score the winning goal in overtime or getting in the stands of a volleyball game and feeling the roar of the crowd fill the air in the gym, it’s pretty much guaranteed that you won’t leave a Slug athletics event feeling unsatisfied. With free admission to those with student IDs and only $5 for other spectators, the price is definitely right.

Athletic Director and former collegiate athlete Linda Spradley knows that “the home court advantage here at UCSC is unbelievable.” So don’t underestimate how good it feels to get in the stands clad in Slugwear and take part in the cheers that will push Slug athletes to perform their best and give students a reason to take pride in the university. Go Slugs!

Here’s what students can look forward to cheering for in the fall.

Both of these teams have a history of excellence. In the past few years, the men have taken the regional championship title, sent a few top-notch players to the MLS, and made five consecutive NCAA Playoff appearances after posting a 15-5 overall record and a 10-3 record in Division III last year.

The women have made it to the postseason for the past two years and finished last season with a 12-3-2 overall record and 8-3-1 in DIII.

Slug soccer games bring out the biggest crowds of any other UCSC sport with more than 300 fans showing up for weekend games. Word to the wise – be sure to bring a towel or something to sit on to avoid a wet, grassy seat. The men’s first home game of the school year is on Friday, Sept. 26 at 4 p.m. against Chapman University at the Lower East Field, where home matches for both men’s and women’s soccer take place.

The women play their first home game of the school year against Biola University on Sept. 29 at 4 p.m. On Friday, Oct. 23 at 4 p.m., UCSC will take on DIII rivals CSU East Bay in what will undoubtedly be a rousing, can’t-miss game.

The quick pace of these games makes them some of the most exciting to come out and watch, and many people definitely do. Both teams play their home games in the West Field House Gym, which was under construction last year, leaving basketball and other teams without proper practice facilities. Having no home games last year was an undeniable disadvantage. But now with a newly remodeled and up-to-date gym equipped with new scoreboards, shot clocks and more, the teams are excited to play at home with those rowdy crowds that truly give them the home court advantage. Basketball games will begin in November.

After getting the boot in the spring due to budget cuts within athletics, men’s and women’s varsity water polo were told they would have to turn into club teams under OPERS to save money. But over the summer, the decision was made to reinstate the program for one more year to allow players time to make a transfer to a different NCAA program if desired. Players and those in support of the team managed to raise over $40,000 to help keep the program running for the next year.

Despite the teams’ success over the years, with the men winning the DIII national championship in 2006 and the women finishing in third place last year with an impressive 10-2 record in DIII, both teams will turn club after this year. That means this is the last chance to go out to the pool and see these teams compete in NCAA DIII play.

If you haven’t had the chance to see a water polo match, then you’re missing out. The quick back-and-forth nature of the game, along with its tendency to be high-scoring, makes these matches exciting to watch.

Men’s matches start in September and usually run into November.

Also having suffered from lack of a gym last year, the team is now ready to take on the competition. After playing away matches all last year, the team ended the season with a 14-18 record overall and a 10-13 record in DIII. The older and more experienced players that make up most of this year’s team are looking to get some wins on their new home court.

These teams start competition during the fall, but continue competing into the end of winter. Last year, the swim team sent a number of competitors to the DIII National Championships where the women finished with five All-Americans and the men finished with four.

Women’s Cross Country – this team has seen a lot of success in recent years, with sophomore and first-year runner Mikayla Murphy setting a school record in the 5-kilometer last year with a time of 18:36.

Women’s Golf – competes at courses around the country all the way through the spring. Last year, junior Jessica Lewis shot a 76, the best score in UCSC women’s golf history.

Women’s Water Polo – will begin matches for its final season as NCAA DIII team in the beginning of February.

Men’s and Women’s Tennis – the men’s most recent successes include winning the NCAA DIII National Championship in 2005 and 2007 as well as making it into the playoffs last season. The women are on the rise, going 9-10 overall and 8-2 in DIII last season. Matches begin in January for both teams.

Men’s Volleyball – going 14-11 overall and 8-2 in DIII last year, this team gets better every year and brings out some of the rowdiest crowds that can pack into a tiny gym.