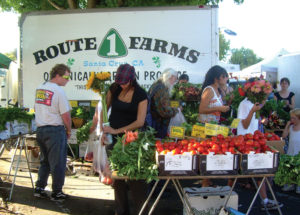 Americans today are being swept by the green movement, which endorses alternative methods for engaging people’s daily activities. Amongst those activities, especially in Santa Cruz, is eating organic, but perhaps most importantly is eating organic food that is grown locally.

Concern for a healthy lifestyle has roots in many different social and political changes that have occurred over the last few years in this country. From impacts created through our culture, such as Al Gore’s “An Inconvenient Truth,” and Santa Cruz’s own history of agricultural interest in sustainability, people have been pushed to take more responsibility for their role in the environment.

But as attached as Santa Cruzans may be to being “green,” organic food often elicits complaints that only an elite percentage can afford to lavish on these products because of high prices. For this reason, the attitude toward organic food is closely linked to its accessibility within social spheres, as well as the purchaser’s own set of beliefs.

Considering the customer experience at Safeway, Jeanne Thomas, the store’s local floral manager, believes big food-store chains, like the one she works at, sell organic food as well as conventional food because of their customers’ desire to eat organic.

At Safeway, the price for organic food is higher than that of conventional counterparts.

During March and June of this year, iceberg lettuce cost $1.49 a head, compared to organic iceberg lettuce, which cost $1.79. It was the same with regular carrots, costing $1.58 for two pounds, and organic carrots at $1.99 for the same amount.

For some, the difference of 30 or 40 cents for healthier food is relatively minimal and worth it. But for others, such as many restaurants, this price difference is a deal-breaker.

Rigoberto de la Torre, the co-manager of Taqueria Vallarta, can see the effect of these high prices for food on his business and on his workers’ wages.

De la Torre claims that because organic food is expensive, the restaurant usually acquires conventional ingredients instead. But he and others at the restaurant are concerned for the Santa Cruzan’s interest with healthy food, so in their menu they have a “Vegetarian Burrito” in order to meet some of those concerns. And despite the lack of organic components, the taqueria can boast fresh preparation.

“Even though the ingredients are not organic, the food is done here,” de la Torre said. “It’s food that is prepared throughout the day.”

Alongside big restaurants, local organic farmers are also criticizing the high prices for organic food, linking the prices with the high price of animal feed.

Brandon Faria, a sustainable organic farmer in Watsonville, comes to the Santa Cruz Farmers’ Market, held every Wednesday on Cedar and Lincoln Streets, to sell his produce. He favors the market because it is a way for farmers and consumers to establish and maintain a two-way relationship, where money is concentrated between these two parties and no one else.

Faria commented on the toll high prices for feed has taken on him and his organic eggs, as it has forced him to charge high prices of up to $6 per dozen eggs.

Faria spends about $350 per week on feed. When people at the market buy his products, he gets almost all of that money, unlike at grocery stores where money is dispersed among distributors and people in shipping. The money Faria earns at a farmers’ market goes straight to maintaining his 20-acre farm and hundreds of chickens in Watsonville. He alone takes care of the chickens, makes sure they are fed and maintained, and brings the eggs to the market every Wednesday to sell them.

Also, to show that his chickens are kept humanely, he invites customers to his farm to check on the chickens. According to Faria, his way of living depends on the consumers, and therefore they have the right to see where their food is coming from.

However, Faria believes that if prices for feed were cheaper, he would immediately bring the price of the eggs down as well so that more people could buy them.

Gregorio Guevara, produce stocker and trimmer at organic food store Shopper’s Corner, believes that the high price of organic food forces a sort of elitism, where only those who are economically stable can afford the organic products.

“Organic produce tends to be expensive and it’s aimed to an affluent society,” Guevara said.

Safeway’s Thomas pointed out that the food’s shorter life span is another disadvantage of organic food.

Another problem facing organic food is availability. For UC Santa Cruz students in particular, with the exception of the Food Bin on Laurel Street, the stores where quality, affordable organic food is sold tend to be located out of easy reach.

Shopper’s Corner, for instance, is located on Soquel Avenue, about eight blocks away from the Santa Cruz Metro Center. Staff of Life, another supplier of organic natural produces, voted Best Grocery Store in 2003 by Good Times Magazine in their “Best Of” Reader’s Poll, is almost 10 blocks down Water Street.

In a car, the seven or 10 blocks is a mild drive, but for those without one, the idea of buying organic food is threatened, even dismissed, because of the time, energy, and distance required to buy food that can be bought in nearby chain stores.

“Sometimes you just feel like eating just whatever, because you don’t want to go out of your way to eat healthy food,” Franco said.

Franco added that being green and buying organic food is merely a trend. For him, people come out early as being very supportive of healthy lifestyles, but in the end they don’t adhere to this belief.

“Everybody has their faces, but in the end [the trend] is going to fade away,” he said.

Valentina de la Fuente, third-year student and community studies major at UCSC, works at the Kresge Co-op, a small, organic, student-run store located at Kresge College. She is concerned with eating organic because it is has become part of her daily life.

De la Fuente grows organic food in her home garden. She’s also involved with a movement that tries to get schools to acquire organic food in its cafeterias, and is currently pushing for Renaissance High School in Watsonville to add such food to its stock.

Sarah Wheatley, a UCSC student who acts as compost coordinator for the Program in Community and Agroecology (PICA), believes it is necessary to have communities that endorse positive food.

“Having community gardens would encourage organic and quality food amongst the people,” Wheatley said.

The Farmers’ Market has about 50 vendors displaying their produce and food. Vendors range from different backgrounds and interests. Some have Mexican dishes displayed with organic ingredients in them. Some sell fresh fish. Most vendors, though, sell organic fruits and vegetables. The environment is similar to a swap meet, and what makes the event unique is the attendees themselves, who prove to be just as diverse as the food for sale.

Old, young, students, children and farmers alike walk along the aisles of the market, all bumping into each other, saying hello, trying to look at each of the booths to get a sense of what the vendor and the produce is like, and whether it’s organic (because not all the food is).

According to Faria, it is the sense of community among the farmers and costumers that keeps the Farmers’ Market going, since they depend on the costumers for their survival.

The appeal of organic food in Santa Cruz has risen to the point of major stores like Safeway adding organic products to their inventory. However, one needs to question the personal price it takes on the general populace, because of the high prices that not all people can afford.

As a concerned and conscious consumer, Thomas recommends that her customers be aware of these differences in price, and to read the label information for the produce. According to Thomas, customers should shop for the healthiest products but with consideration to their situation.

Whether this trend, if it in fact is one, will fade with time, no one knows for sure. For some it’s a lifestyle. But for organic food growers, that process is key for the creation of close-knit communities, and for the growing push toward maintaining these communities alive and strong. However, for these types of communities to even exist in the future years, there needs to be a way that the price and availability of organic food can be accessed by both sides of the socio-economic scale.