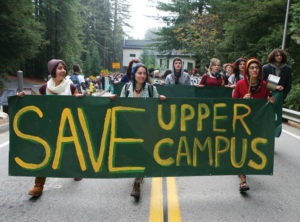 The Long Range Development Plan, one of the more controversial issues to hit UC Santa Cruz, may finally have been settled.

The agreement on the Long Range Development Plan (LRDP) settled the various complaints brought in by separate lawsuits from the City of Santa Cruz, the County of Santa Cruz, the Coalition to Limit University Expansion (CLUE), the Rural Bonny Doon Association and 11 private citizens against the university over its proposed growing plan.

Though CLUE signed off on the deal, which the city, county, university, and CLUE had been hammering out for the past eight or nine months, CLUE founder Don Stevens said that he was not pleased with the final result.

“When you’re going against the university, you have to make decisions, and just from a practical perspective and a legal perspective, we felt we had to go along with the settlement,” he said. “I think that the UCSC growth plan is exceeding the carrying capacity of the community. There are very limited resources for water, infrastructure for roads, room for housing, and this is just pushing us past the limits of what this area can handle in terms of population and traffic and water consumption.”

Stevens specifically pointed out the proposed logging of many acres of upper campus, as well as the plan’s resulting impact on greenhouse gasses. Assembly Bill 32, which passed in 2006, mandates communities to reduce their greenhouse gas emissions to 1990 levels by 2020.

“The Santa Cruz area will not be able to comply with that state law with this much growth,” Stevens said.

The agreement includes much more specificity about the university’s potential growth, including a promise to house 67 percent of the students contained in the plan on campus. The plan also details that undergraduate enrollment will not exceed 17,500, but allows for continued growth in the graduate population.

The agreement also specifically seeks to address concerns over water access and traffic, two big complaints in the lawsuits. The university would now pay $6,530 per 85,000 gallons over the campus’s current use to pay for infrastructural improvements and developments of new water supplies, according to the LRDP website set up by the university.

Though traffic remains a hot issue, levels have actually stayed relatively constant since 1998, though enrollment has increased 45 percent in that time, according to Transportation and Parking Services Director Larry Pageler.

Santa Cruz Mayor Ryan Coonerty is extremely pleased with the result of the negotiations, and said that this agreement was “historic” in the precedent it set for city-university relations.

“UCSC and Santa Cruz have been the poster children for dysfunctional relationships, and I think that this agreement moves us to be a model for how universities and communities can form partnerships,” Coonerty said.

Because universities are traditionally exempt from local land use laws, Coonerty said, cities often have a hard time getting them to pay for infrastructure improvements and facilities for growth. Based on what he called the “perfect storm of events,” which included the new UCSC Chancellor George Blumenthal, leadership change in the UC Office of the President, as well as Santa Cruz’s representatives’ powerful placements in the state legislature, combined with two ballot measures passed by voters in 2006, the city was able to reach the deal with the university.

“I think other university communities are already looking at this, and thinking about not only how to mitigate the impact, but how to do better collaborative planning,” Coonerty said.

Also, Coonerty said that Chancellor Blumenthal, who took over at the summer 2006 death of his predecessor Denice D. Denton, had been a tremendous help with the negotiations.

“Between Chancellor Blumenthal and all the previous chancellors, it’s been night and day,” Coonerty said. “He’s been much more accessible, he’s been willing to listen and understand and look for creative solutions.”

Still, the complicated history of the LRDP at UC Santa Cruz leads many student groups to still doubt the veracity of the university’s agreement.

During a Nov. 7, 2007 rally, several protestors scaled tall redwoods on the intended site of a Biomedical Research Facility, declaring their opposition to the LRDP and refusing to come down. The area below the trees, labeled the “Autonomous Zone” remained occupied by anti-LRDP protestors until it was voluntarily vacated at the end of the fall term. The denizens of the trees remain in place, and publicly denounced the summer’s agreement.

“We will not be coming out of the trees,” according to a statement from LRDP Resistance, posted on popular independent media website Indybay.org.

“The University has agreed to pay ‘normal city fees,’ so all the city has won is the ability to subject the University to the same laws as every other corporation operating in Santa Cruz. Having UCSC pay for their impact is not the same as having no impact on the city.”

“The University has not changed its plans to destroy 120 acres of forest and add 4,500 students to this already overburdened city, so our opposition is still essential,” the statement said. “Let the city and University make their agreements. We are here for the forest.”