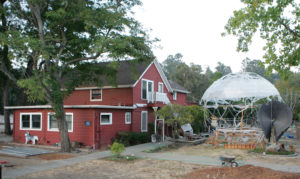 Kirby Scudder stands alone on his porch staring at another one of his unique art projects — a 25-foot-diameter globe made out of recycled plastic. An impressive construction site of what will soon become the Tannery Arts Center looms behind him in the distance. For those in the arts community, this skeleton of wood and steel marks a crucial stride forward in a growing movement to organize and represent the thousands of local artists, thereby transforming Santa Cruz into a thriving epicenter of artistic activity.

Santa Cruz’s reputation as a quirky, organic-fed culture is nothing new. However, when it comes to being internationally recognized as a hotbed for artists, art galleries, and an established arts community, such as those belonging to New York or Los Angeles, Santa Cruz has always fallen short.

“There was the myth that you couldn’t really sell art in Santa Cruz, that galleries wouldn’t work, and that artists couldn’t really support themselves,” said Emily Reilly, former mayor of Santa Cruz, who worked alongside Scudder to promote the arts during her two terms in office.

“There has been low self-esteem on the part of Santa Cruz as an arts community,” she said.

In the past, the lack of venues to show and sell art — which caused many local artists to either exhibit their art in larger metropolises such as San Francisco or L.A. or even move away — hindered the development of a flourishing arts scene. But over the past five years, a rapid change has taken place due to the efforts of many organizations and many dedicated individuals.

Blowing into Santa Cruz on an East Coast breeze, Scudder’s idea of what an arts community should be came from his experience growing up in SoHo, a then-emerging art district in New York City. A love of bicycle riding ultimately swayed him away from his brief stint working for the city of San Jose and pedaled him into Santa Cruz.

“Kirby was really able to see when he came to town that this community is vital and vibrant and that it is easy to be successful in a profitable way, not just by creating beautiful art, but by actually supporting the arts community,” Reilly said.

Scudder began selling his paintings in an empty retail space off of Pacific Avenue in 2002, where he received throngs of questioning artists doubting the success of his gallery based on the past failures of the few others.

“I came to the conclusion both through my business experience and as an artist that there were too many artists here without any representation,” Scudder said. “There were no galleries and all these artists.”

To remedy this problem, Scudder founded the Santa Cruz Institute of Contemporary Arts (SCICA), of which he is currently the director. Together with the City Redevelopment Agency, Scudder also began opening “Question Mark Galleries” in 2004, temporary art galleries created in empty for-lease spaces.

“We started creating all these galleries that were all very different and dedicated to serving the community at large and it just kept steamrolling,” Scudder said. “We needed to do more and more because there was such a demand for this, and we started to create this art scene.”

Since the days of the “Question Mark,” an infectiously vibrant change has been sweeping through the Santa Cruz arts community, revitalizing the interest of the many involved and affected.

This includes Susan Hillhouse, curator of exhibitions and collections at the Museum of Art and History.

“Santa Cruz is becoming a different town than it was before the earthquake,” Hillhouse said.

The infamous 1989 Loma Prieta earthquake, which rocked and rattled the San Francisco Bay Area and parts of Santa Cruz and Monterey counties, unnerved citizens and damaged many buildings and businesses.

“It took a long time for the town to come back and be reinvented,” Hillhouse said. “But out of the rubble came a lot of new ideas and a lot of new energy, and then people like Kirby came along.”

Joint efforts from the Redevelopment Agency, the City Council, the SCICA, and many other art affiliates and artists are raising the phoenix from the ashes and lifting the city to new heights by providing the venues and support needed in order for the arts community to prosper.

In only a short amount of time, galleries such as the Hide, the Mill, the Dead Cow, the Felix Kulpa Gallery, along with Michelangelo’s Gallery and the Attic surfaced to promote the arts and provide support for the many existing and emerging artists.

A small $5 donation gives artists, students, and arts enthusiasts unlimited rides aboard this eclectic moo-mobile, allowing the public the opportunity to check out the latest art happenings and events at their leisure. The monthly tour takes participants to most galleries in Santa Cruz in one night.

With support such as this, Scudder feels that the future of the local arts community looks far from bleak.

“There is this expectation now that there is an art scene here,” Scudder said. “There are now places to go, to show work, and to feel proud about. This all ultimately leads to the Tannery.”

Once home to the historic Salz Tannery, the Tannery Arts Center will be Santa Cruz’s ultimate art showcase.

The current three-phase project developed by the City of Santa Cruz and Artspace Inc., a nonprofit developer of affordable space for artists, is transforming the 8.2 acres of land nestled between the San Lorenzo River and Highway 9 into the future site of a thriving artist colony.

Initially purchased by the Redevelopment Agency, the Tannery Arts Center comes with a price tag of around $42 million. Borrowing, grants, fundraisers, and other sources, none of which will come out of the city’s General Fund, will finance the project.

Artists are expected to move in by February of 2009.

A 150-seat Performing Arts Center, a permanent home for the Santa Cruz Ballet Theater, outdoor exhibition space, classrooms, offices, and coffee shops will complete the Tannery Arts Center’s transformation into a bustling center for the arts.

This massive project is not under the radar of community members. On June 7 and 8, the public raised approximately $55,000 from art sales and commissions at the Mill Gallery’s “Art for Art” exhibition and benefit. The benefit was also the Mill’s biggest opening to date. Also in June was the Dead Cow Gallery’s “A Month of Dance in a Small Room,” to promote the performing arts.

Joseph Hencke, executive director of the Hide Gallery, is a believer in the Tannery Arts Center’s ability to transform Santa Cruz.

“If the Tannery flourishes in the ways that it should, what the end result will be, if this is all successful, is that Santa Cruz will become a solid destination for artists, art buyers, and people who enjoy art,” Hencke said. “Santa Cruz will be made into a destination place to experience the arts.”

Local painter Barbara Leites also sees the benefits that the Tannery Arts Center and the direct involvement of many have provided.

“I think the work in Santa Cruz is now at a higher level. There are a wide range of things that can now be taken advantage of and a lot more options when it comes to showcasing art,” said Leites, who is also a teacher at Georgiana Bruce Kirby Preparatory School. “Selling art will be made a lot easier if the Tannery gets a good grip, really screens people and actually has artists living there.”

Public spaces such as bars, clothing stores like the Cardboard Spaceship, and coffee houses such as the Firefly Café, Lulu Carpenter’s, and the Stevenson Café have furthered the movement by turning their walls into places for artists to locally display their art.

The celebrated hipster hangout Caffé Pergolesi is no stranger to this concept, with the walls of its four rooms dedicated to local artwork and photography.

“We give the ‘starving artists’ a venue to show their work and to provide support for them,” owner Karl Heiman said. “We don’t censor art here and thus make it easier to show many types of art a lot of other places wouldn’t show, such as nudity, horror, and blood.”

In addition to the support from gallery and non-gallery businesses, the city itself is seeing the art scene as a selling point for tourism, which many think will benefit the city economically.

The term for this idea is “Cultural Tourism” and the concept is simple. Investing money into arts and culture projects and events will encourage tourists to spend more money attending exhibitions and performing arts shows, which are normally pricier than spending a day at the beach.

“Cultural tourism is a step in the right direction for Santa Cruz toward economic stability. We’re not going to have more factories or more farm land than we already do,” Hencke said. “Cultural tourism has an opportunity to be a much larger tax base without more strain on public works.”

But cultural tourism can only work if galleries and art organizations are dedicated to working together toward creating a community supportive of artists and economic growth.

The closures of the popular Attic and Hide galleries in mid-July left many wondering if the arts in Santa Cruz will actually flourish or if the closures signify the start of a new trend.

“The Attic had been a challenging space for a long time,” Scudder said of the upstairs teahouse, gallery and nightclub. “It tried to take on too much and embrace a lot. Profit was just hard to come by.”

On the other hand, the Hide gallery, which was crucial in representing a younger generation of artists, presents a different story. The desire for Hide partakers such as Henke to try other artistic ventures such as a virtual gallery coupled with “market forces” ultimately saw the timely end to this flourishing hotspot.

Scudder makes it a point not to blame the closures on the slouching economy that many think may stifle Santa Cruz’s creation of an arts community. Instead, the comings and goings of art galleries, much like the Question Mark galleries, should be taken as part of a dynamic and ever-changing process, with spirited and creative out-of-the box thinkers molding the art scene.

It will certainly take out-of-the-box thinking by organizations such as the Santa Cruz Art League (SCAL) in order to renew their image. Founded over 100 years ago, changes in the SCAL’s accessibility are needed in order to involve more members of the arts community.

“We were seen as a very conservative group, especially in the past,” said Carol Jenied, chairperson for the exhibition committee. “But we’ve really been working to change our image and to bring younger people and new people into the building. We’re trying to be more experimental.”

Hillhouse also adds that the Museum of Art and History is also trying to collaborate more with outside organizations and venues and rededicate themselves to local artists.

Building stronger ties between UC Santa Cruz, Cabrillo College, and the city will further help the development of what Hillhouse calls “a philosophically sophisticated town.”

But until the Tannery Arts Center is fully complete, questions and doubts remain as to whether or not it will be the final push needed to successfully turn Santa Cruz into the cultural hub many desire.

“You build but you can’t always expect to fulfill what you do,” Leites said.

But one thing is certain: Santa Cruz is painting its raw canvas and preparing itself for a bright future.

“I’m a real big believer that in the next 20 years Santa Cruz will be poised artistically to be that Mecca for a worldwide art community, although there will be many others,” Scudder said. “You will be able to come here as a serious artist from anywhere in the world and have sufficient infrastructure for you to have an audience and resources.”

When this occurs, says Scudder, “Santa Cruz will really become an incubator, a think tank for the arts.”