The Happiest Guy in the Room 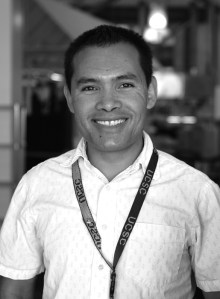 Carlos Ramirez is a happy guy. Not that it takes much to make him happy. Still, it seems there’s hardly ever anything less than a beaming smile on his face at any given time.

So who is Carlos Ramirez and what’s the secret to his happiness? He’s someone that hundreds of UCSC students see every day but may not have ever spoken to. He’s the guy that stands behind the front desk at the College 8 Dining Hall and swipes IDs, and he absolutely, whole-heartedly loves his job.

In a position where he stands at the front of a loud cafeteria dealing with hungry freshmen trying to smuggle out oatmeal cookies, one would think that he had more to complain about. But his biggest issue with the job is trying to figure out why there are two cash registers when he only uses one. When others can only smell day-old hot dogs and pizza grease, Carlos smells fresh rosemary.

“I just love my job. I really do,” Ramirez said. “Especially working at College 8. It’s such a beautiful place. You can just wake up in the morning and when you open the door, you get this fresh smell of rosemary outside. And it’s the environment – it’s so appealing.”

Carlos, 28, moved to Santa Cruz almost 11 years ago from Guanajuato, Mexico, following his parents who had moved here when he was just four years old. He has always had an interest in computer systems analysis and robotics, and having studied it in Mexico and the United States, Carlos took a job with Texas Instruments, but left after two years – just in time for the branch’s closure.

“I just decided that it wasn’t for me,” he said. “It was very monotonous and it had nothing to do with people…so one day I was sitting on my couch – I remember that because I wrote it down – and I was like, man I don’t like this job very much. It was 12 hours a day and it was at night from six to six and then I realized I don’t want to do this the rest of my life, working like this. I don’t talk to people anymore.”

Carlos, who has studied at Cabrillo College every year since his move to Santa Cruz, found his calling through an exercise in a psychology class that told him what kinds of work he would be good at.

“It made sense to change to something I really enjoy doing,” he said. “It told me I was more people-oriented and so I thought maybe I should give it a try. So I came to UCSC and applied … and now it’s going to be my eighth year here.”

The surprise of not knowing who he’ll see or what he’ll learn has made each day a gift that he wakes up eager to unwrap.

“I like the interaction with the students,” he said. “They always come up with different stories and different ideas. And it’s always something new … you just don’t know. Tomorrow it could be another person and a different conversation you’ll have.”

Taking every given opportunity to learn, Carlos takes lessons from his Cabrillo classes, such as communications, and applies them to the daily tasks of his job. He started a log of any concerns students tell him they have about the dining hall, which he then types into the laptop, often seen at his side on the front desk, and gives to the manager.

“I say thank you for telling me because by having you tell me, you have done us a great favor – if that issue bothers you, it probably bothers another costumer and that’s not the type of service we want to provide,” Carlos said.

He’s also come to use that ever-present laptop as a place for any good ideas that come to mind that he feels could improve the dining hall, as well as a way to remember interesting conversations that he may engage in that day.

Carlos began a management-training program this summer in order to start making his way up the totem pole in UCSC Dining Services, in hopes of becoming a Unit Manager. He’s currently reading four books, all of which relate to food service management and developing the leadership skills necessary to take on the job he would like to acquire.

His aspirations don’t end there. Until there is an opening for a shift manager, the first step in his climb to the top, he does everything he can to assure that the College 8 dining hall is the best it can be, giving students an enjoyable experience any time they come in for a bite.

In a job that many of his co-workers have shown discontent with – as seen in the American Federation of State, County, Municipal Employees (AFSCME) workers’ union strikes of recent months, pushing for higher wages and better benefits – Carlos is content being independent and somewhat ignorant of the union and its efforts to strike.

“I pledge my allegiance to the university if you can put it that way,” he said. “The students and the university have allowed me to make my living in a very comfortable way. In fact I have these phrases that I put on the mirror everyday, one is “smile.” And the other is ‘remember to treat students with utmost respect because they make it possible for you to make your living.’”

When he’s not at work chatting it up with students, Carlos is taking advantage of everything the town and the university has to offer, whether it’s playing a pick-up volleyball game at the beach or checking out as many CDs as he is allowed from the McHenry Library to satisfy his music cravings.

And for those who will be strolling by Carlos at the College 8 dining hall front desk, there are just a few things he wants everyone to know.

“Students are the most important people in the university and so they have all my support and they are my friends of course, always,” he said. “If they have a question, they can always ask me. I don’t know if I’ll have the answer, but I can get the person who knows the answer.”