There’s no Fuss on the ‘Walker’ Bus 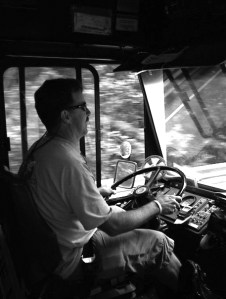 With a dedicated facebook fan club, a love for wildlife and a friendly demeanor, volleyball aficionado and UC Santa Cruz bus driver Steve Walker continues to bring smiles and laughter to the student body with his memorable bus stop nicknames. A Member Action Team (MAT) leader for AFSCME local 3299, Steve has been a part of the fight to get the union a fair contract.

City on a Hill Press recently sat down with Walker over coffee and a Joe’s sub to find out just why students call him “the funny bus driver.”

How did you get your current job as a UCSC bus driver?
I was unemployed for a couple of months. [When I] applied for [the job], it was a part-time casual position and [UCSC] couldn’t offer me many hours. So I started working on Saturday nights for eight years and I filled in where I could. [Meanwhile] I worked Monday through Friday in Monterey as a milkman.

What do you enjoy most about your job?
Both kinds of wildlife. When you go down the campus hill [you see different birds]. I’m a big-time bird watcher. And I love picking up people and taking them places. Any passenger that says, ‘how did you know I wanted your bus?’ and then thanks me for waiting, makes my day. When a passenger gets on my bus, I make sure he or she will have a smile on their face when they get off.

What has been one of your most memorable or interesting experiences on the job?
Transporting people at the first rain last year. That was pretty bizarre to say the least. But, [as part of my job] I mainly like making up bus stop names.

What are some of the bus stop nicknames and how did you come up with the names?
Two of the hardest ones [to come up with] were Sterile-Merrill and Canadian Crown Whiskey.
1) Sterile-Merrill later became Miller time at Merrill and then it’s as close as I get to Merrill-juana without inhaling. It has to do with how well [the names] progress.
2) I thought of Canadian Crown Whiskey when a whole floor at Crown got cited for being drunk and I thought beer is near, but liquor is quicker.
3) For anti-social sciences one and two, college 9/10, I wouldn’t really say that college 9/10 are anti-social, but when they put up the fence I thought that they are either trying to keep people out or keep people in.
4) At Gradgy-ated student housing, you are a graduate student and you are ‘gradually’ leaving but you are still at school.
5) Party at Porter is one of my favorite nicknames because of the people that are at Porter. On one of my shifts, I picked up a group of people that were sprinting across the street from Porter. I looked at the Porter circle and saw police cars with their lights flashing and the students [that got on my bus] said “we got to get out of here.” I thought that there must be a party that’s getting busted.
6) Fantasy student housing, where it’s the fantasy of going to school and the reality is going back home.

Is there something interesting or quirky about you that people don’t know?
I’m a student of body language. When I was working at a Public Library in Glendale back in college, I would stare off at the lobby and watch people to see what they were thinking, and their [overall] body language. It helps me when I drive a shuttle bus, because then I can figure out who wants a ride or not.

What is something you love most about Santa Cruz?
It’s a great place to ride a bike. I ride my bike back and forth to work, rain or shine for four to five days a week.

Back in March you had heart surgery recently. How did this affect your bicycling routine?
I was riding my bike to work [one day] and I got chest pains…The next day I was riding my bike up High Street, but it got so painful that I had to stop and walk my bike for a while, which I never do. My cardiologist said that I had an 85- to 95-percent blocked left coronary artery…they did a single coronary arterial bypass graph. I was high on drugs for a month and all I could do was walk everywhere. In May I got back on my bike and I’ve been riding ever since.

Do you have any specific goals as part of AFSCME?
Right now we are in the middle of a contract campaign. We had a five-day strike in July, which was the first statewide five-day strike the university has had. Basically, we want equal work for equal pay. We don’t like them nickel-and-diming us on benefits. They give you a nice contract and then they start taking money away from you.

Is there something you would want to change about Santa Cruz?
Since I’m a bicyclist and I commute back and forth to work, I’d say [Santa Cruz] should [offer] a car-driver education about bicycling. Two percent of the bicyclists don’t stop at stop signs, ride on the sidewalk and do whatever they feel like doing. And then the 98 percent of us that do obey the rules to the best of our knowledge gets blamed for the two percent that don’t.

What are some of your plans for the future?
I may travel a little bit, but I get enough travel from people that come back [to school] and tell me about the places where they’ve been.

What words do you live by?
I live for the moment.