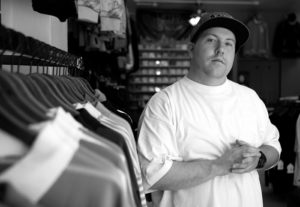 There’s a growing trend on the streets of Santa Cruz, and it’s not about hippies, surfers, or increasing crowds found downtown. It’s about colorful and inspired new businesses popping up on the streets of Santa Cruz as a result of young people living out their entrepreneurial dreams. Their youthful perspectives on business set them apart from competitors, but don’t protect them from the trials and triumphs that come along with the job. From founding a clothing line to opening up a coffee shop, these six young Santa Cruz entrepreneurs share their experiences about what it takes to be young and stay afloat as a local business.

Twenty-two-year-old Spence Hinkley started and owns We Are California Grown, an apparel line hailing the Californian way of life.

“I went to boarding school on the East Coast during one of the coldest winters they had,” said Hinkley, explaining why he wanted to open a store specifically for and about Californians. “I didn’t want anything to do with it. I think that’s where I got all my California native pride.”

Originally a skim board company, We Are Californian Grown evolved into a clothing line because of higher demands for apparel.

“We cater to all walks of life in California; not necessarily [only for those] from California, just those who appreciate the lifestyle,” Hinkley said.

Adapting to the market was not the only influence that changed Hinkley’s original plans for the store. A falling-out with a former business partner hindered the company’s growth in the beginning.

“My partner and I didn’t see eye to eye [about the company’s direction],” he said. “It was a bad break-up that took a while to get over and restart California Grown. I started from scratch by myself.”

Hinkley, who never finished college, says he is proof that a college degree is not necessary to own a successful business. For him, the entrepreneurial route proved more worthwhile than any formal education.

“I’m horribly dyslexic,” he said. “I think in my personal case, it would have taken too much time and I wouldn’t be able to do what I’m doing now.”

Recent UC Santa Cruz graduate Paul Heiman opened The Back Perch this past academic year, a coffee stand located in the Academic Resource Center. As a former music student, Heiman knows what it feels like to wander around the Music and Art buildings looking for a bite to eat during long days at the studio.

“I take the term ‘starving artists’ literally when I say it,” he said. “As a musician, I’ve been through the routine of eating out of vending machines.”

Although his vision of feeding fellow starving artists at his alma mater has become more than a mere thought, it did not come without some doubt from others.

“Nobody gave me the time of day,” Heiman said. “I would ask for something and they would never get back to me. I would have to call them a lot and really push.”

Other businesses’ presumptions of student entrepreneurs added to difficulties of opening a business.

“I would ask them to make a delivery here and they’d said ‘UCSC? We can’t do that,’” he said. He found that mentioning established businesses, such as his father’s coffee shop, Caffé Pergolesi, gave him some leverage.

Although his father’s help proved valuable while starting his coffee stand, Heiman’s vision became a reality through his own funds and efforts.

“All the money is my money from my savings,” Heiman said. “But he’s definitely there to help figure things out.”

Matt Isles and Jack Beran, both in their twenties, run one of the few hip-hop stores in Santa Cruz.

Thanks to his five older brothers, Isles grew up listening to hip-hop and has always been passionate about the music and culture.

“We always wanted to dress nice, stay fly, so why not open a store like that,” he said.

Before Isles’ idea came into fruition, he met his business partner while working at Streetlight Records. Beran, a recent graduate of UCSC, serendipitously met Isles as an interested customer.

“I feel that Jack and I are prime examples of young people [making it in Santa Cruz],” Isles said. “He took the college route, I tried but it didn’t really work out. We came together and both showed [that either way] you can really be successful.”

Behind a glass counter full of hip-hop albums, Isles greets most of his customers on a first-name basis and knows exactly what they’re looking for in the store.

“There are people that come in here and all they want to buy is a white t-shirt or they listen to a particular type of music so, I have that ready for them,” he said.

While they easily maintained good relations with costumers, the guys found that it was a challenge to convince neighboring businesses that such a young business and unique-to-Santa Cruz idea could sustain itself.

“When you say ‘hip-hop,’ ‘urban,’ or ‘street,’ it’s going to scare [people], and it did,” Isles said. “I think it was a long time coming. People always [associate] Santa Cruz with hippies but UCSC has many students, especially kids from the Bay Area and LA, who are a part of [a growing hip-hop] culture in Santa Cruz.”

Isles and Beran had to continue persuading realtors and building owners to give them a location.

“I think the most difficult thing to do is trying to prove to the community that your ideas are going to work, that you’re credible, and you’re going to pay rent,” Isles said. “Money always talks. To me, it’s about being at the right place at the right time.”

Michael Branson is the co-owner, manager, and buyer of RCO, a northern-Californian-minded boutique in downtown Santa Cruz.

“A lot of people would look at our place as a hip-hop clothing or urban wear store, but I don’t really like [being categorized]; it’s different,” Branson said.

He feels that the clothes RCO sells provide an exclusive market not found anywhere else in Santa Cruz. Branson believes that his young age is advantageous in gearing his store to target audiences, as compared to older owners trying to be successful with a similar theme.

“I think there are stores that are trying to do this in other cities, but they have someone with money who’s a lot older and not attached to this market at all,” he said. “You can tell when you walk into their store and see what they carry.”

Still, the owners have found that many are quick to judge their store.

“They would give us a weird eye and ask us if we really wanted to do what we’re doing because [this market] is something they’ve never heard of,” Branson said. “Yeah, it’s tough, but any small business that you open takes three to five years to see some actual profit.”

Gaining trust from buyers was one of the big challenges the owners had in the beginning stages of their business.

“We had to get a lot of brands and have the space already. We weren’t open for business, but we had to be open for a couple of months and show people what we were doing before we got an agreement on getting clothes,” Branson said. “You gotta learn fast.”

Josef Slowik and his girlfriend Caitlin Parker own and run Firefly Café, a small coffee shop on the fringe of downtown Santa Cruz.

The high living cost in Santa Cruz attributed to the demanding monetary sacrifices the couple had to make.

“Caitlin put in her entire college fund and I gave up everything I had for it,” Slowik said. “There was a point in the business where there was no income coming in but we still had to be here almost eight hours a day. It’s really hard trying to live in this town.”

Despite financial difficulties, the feat of establishing a business on their own was worth all the sacrifices.

“We were really tired of working for other people. I was working at the UPS store and I was thinking, ‘That’s not what I want to do for the rest of my life,’” Slowik said.

Luckily for the café, there are local property owners such as Joe Quigg, the landowner of the Firefly Café, who believe in younger businesses as an essential part of city’s development.

“I think he really wants to see people succeed,” Slowik said. “He made us work for it but he was there when we needed help. He likes to push, to see this whole town grow.”

Childhood friends from Las Vegas, Brandon Spector and Michael Snider dreamed of opening their own store since they were teenagers.

“We were just figuring out a way to support ourselves by doing what we love most, and this was the only way we can do it,” said Spector, the 28-year-old co-owner of the Krate.

Today, in their eclectic store on Pacific Avenue, they sell vintage boomboxes collected over the years, boutique clothes and music records, among other art-inspired merchandise.

“This store is a reflection of the kinds of things that we have involved ourselves in in our lives,” Spector said. “There’s no sub-cultural affiliation, but we definitely cater to a broad audience.”

From designing the look of the cash register to having artists show off their work in their store, Spector and Snider have involved themselves in the arts and brought their ideas to Santa Cruz.

“We’re not just in it to make the buck; we want to get the community invested,” Spector said. “We’re looking at the bigger picture.”

The Krate was not exempt from the financial difficulties that come with new businesses. In the process of getting the Krate up and running, the two friends learned about the complexities involved in financing a business.

“In order to get a loan for small businesses, you need assets — you need strong assets — and you need incredible amounts of credit,” Spector said. “You really have to be a very special individual to be 28, or 25 or even 30, to qualify for a loan.”

To increase their income, Spector and Snider have found other means to continue funding their store. Spector is a DJ, owns an eBay business, and does occasional construction on the days he has off at the store, while Snider uses his artistic abilities with web design to get by.

“This is no joke. This is my entire life. It’s hard to have a girlfriend, it’s hard to have a dog, it’s hard to put food on the table,” Spector said. “My word of advice is if you think you want to have a business, it has got to be so ingrained in you that you are willing to make the ultimate sacrifice. If you still feel that way, go ahead and do it because you got nothing to lose except all your money and all your time, but you only live once. Carpe diem!”