Fighting for Friendship and a Cure 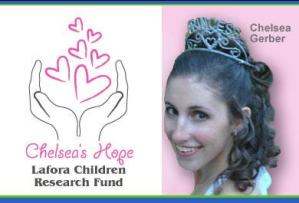 Thus begins the letter from the parents of Chelsea Gerber, a young woman suffering from the rare epileptic disease, Lafora. Her journey through the ravages of disease tell the story of a normal teenage girl thrown into a world she cannot escape. For UCSC first-year student Danielle Goldsmith, working toward finding a cure for her friend has become her highest priority.

“Lafora is a rare epilepsy that starts in the teenage years caused by a genetic mutation,” said Goldsmith. “From diagnosis the patient has about five to ten years to live. It’s horrible.”

“When I first met Chelsea I knew she was sick but you couldn’t even tell. She seemed perfectly healthy,” said Goldsmith. “Her parents did not want us [her friends] to know what she had because they feared we would look Lafora up and learn the horrible truth. When her mom realized we would support and help her, she told us about Chelsea’s illness.”

The diesease is extremely uncommon; according to the Lafora Children Research Fund, just one hundred people worldwide are known to suffer from the disease. There is no cure, and little funding designated for finding one. To raise awareness for Chelsea’s and others’ struggle, Chelsea’s mother and doctor, as well as Danielle’s mother started Chelsea’s Hope, a foundation dedicated to spreading the word about Lafora and raising money to establish a fight for a cure.

Danielle is dedicated to helping Chelsea’s Hope. Goldsmith does her part by helping with the Chelsea’s Hope website, formatting web design and making updates to the foundation’s website. She attends various events benefiting the foundations, such as auctions and affairs to raise both funding and awareness. Additionally, she speaks out about Lafora to friends and peers in effort to make Chelsea’s cause heard.

Goldsmith balances her work with Chelsea’s Hope with a rigorous course load at UCSC and aspires to major in Health Sciences. While at home, Danielle visits with Chelsea and helps care for her friend, who is in such an advanced state of Lafora that she does not have the means to attend school herself. Because of this Goldsmith said she has realized her own good fortune. Helping Chelsea with her everyday life may not be enough, but the love and obvious care that Goldsmith shows for her friend would prove to more than suffice.

As Lafora is considered an orphan disease, one so rare that researchers deal infrequently with it, little funding has been devoted to finding a cure. Lafora researchers are working on two possible therapies for patients: gene therapy for Lafora patients and gentamicin treatment for those with nonsense mutations.

“Before Chelsea’s Hope there weren’t any other organizations out there for Lafora awareness and funding,” said Goldsmith. “I’m doing what I can to donate, and get others to do so as well. The lack of funding from the government is holding back the cause and making it too difficult to develop a cure.”

Chelsea’s Hope reaches out to students Chelsea’s age to help support the foundation. Lafora can affect anyone, anywhere. It is the Lafora researchers hope that one day someone with Lafora could walk into a doctor’s office and walk out with the necessary medication to prevent the spread of the disease.

“It’s hard to find people who know exactly what you’re going through,” said Goldsmith. “We get emails from all over the world from people so grateful to have an outlet for support and for the foundation. It makes me feel good that I’m helping to make a difference.”

“I’m doing what I can,” said Goldsmith. “Chelsea deserves more than this.”

Students and supporters alike can aid Chelsea’s Hope in raising awareness for Lafora and the effects on those who suffer from it. Donations are always accepted and welcomed by the Lafora Children’s Research Fund through the foundation’s website, www.chelseashope.org. Visit the website as well to learn more about Lafora and Chelsea’s story.