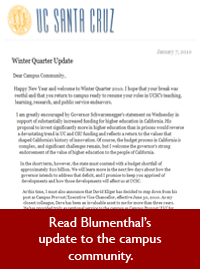 After serving five years during a notably difficult fiscal period, campus provost and Executive Vice Chancellor (EVC) David Kliger has announced that as of June 2010, he will step down from his post.

Campus spokesperson Jim Burns, who has worked closely with Kliger since his appointment by former Chancellor Denise Denton in March 2005, stated that the reason for his departure is not due to recent budget circumstances.

“It is certainly a tough time to be running the UC’s budget,” Burns said. “The job goes without saying that it has been challenging, but that isn’t why he is leaving. He just felt that five years had been enough time.”

Lori Kletzer, chair of the Academic Senate (AS), has worked with Kliger for nearly three years. She described how his career and administration are related.

“He has provided leadership in every dimension of the budget, with the campus’s best interests in mind, in what is a very difficult time,” Kletzer said. “… I think that it is just a natural marker in what has been a long and productive career.”

Kliger has not yet announced what he will do once he completes his term as EVC.

Kliger began serving UC Santa Cruz in 1971 as a professor, and has been an administrator for nearly 20 years. Aside from his administrative duties, Kliger researched eye pigments that allow animals to see color. Today he heads the Kliger Research Group, which studies how proteins react.

“When I was asked to fill this position in 2005, I expected the appointment to last only six months while Chancellor Denton searched for a permanent EVC,” Kliger said in an e-mail to City on a Hill Press via Burns. “However, a series of crises on the campus convinced me that continuity of leadership was important and that I needed to stay in the position.”

Kliger worked with Denton for a little over a year before her death, when Chancellor George Blumenthal was appointed in the interim.

“He has been a very sturdy bridge between two chancellors,” Burns said. “He has overseen the budget during challenging times, and served faithfully and tirelessly.”

During Kliger’s term as EVC and campus provost, UCSC has seen fewer and fewer dollars within the budget and many protests against the shortfalls.

Burns emphasized that these events, which could have prompted a concern for Kliger’s safety, did not factor into his decision to step down come June.

Similarly, AS chair Kletzer emphasized that events such as this “come with the position,” and as such would not be the reason for his departure.

“I know from working with him throughout all of this that those have definitely been difficult moments, but I would not say that that drove him to step down,” Kletzer said.

Kliger will serve in his position for the remainder of the academic year and will continue to have a role in the budget-planning process.

“We still have significant challenges ahead of us and a lot of work to do in the next six months to address our continuing budget challenges,” Kliger said in his e-mail. “These challenges will not be addressed by any single person, but by members of the entire campus leadership team.”

In an e-mail sent to the campus community, Chancellor Blumenthal laid out Kliger’s role in the coming months, mentioning the continually challenging nature of his position especially at this time.

“There is much work to do, and Dave will continue, with my full support, to oversee the 2010-2011 budget-planning process,” Blumenthal said. “I am grateful that we will benefit from Dave’s leadership this winter and spring. … There is little doubt that difficult decisions will have to be made in the next few months.”

Blumenthal stated that UCSC administration and Academic Senate leadership will begin looking for a replacement immediately.

Kletzer stated that the location of the search for the next EVC has not yet been determined. The selection could occur at the national level, within the UC system, or internally at UCSC.

“A final decision about the range of the recruitment has not been made,” Burns said.

Kletzer stated that there is no need to impose limits on where to conduct the search.

“A campus that has as much potential as ours, and desires to be on the national stage — I think we should cast a very wide net in looking,” Kletzer said.

Many members of the campus community have expressed positive sentiments regarding Kliger’s administrative role.

“As my closest colleague, Dave has been an invaluable asset to me for more than three years,” Blumenthal said in the e-mail. “He has provided truly exceptional service. … I will miss his candor, his wisdom, and his tireless dedication to UC Santa Cruz.”