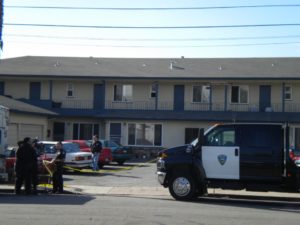 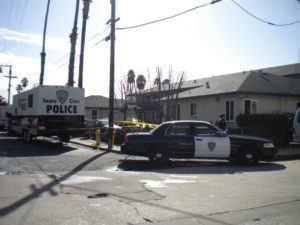 Both victims were Chicano/Latino males, 20-30 years old. Authorities have not yet verified the victims’ residency or age. The suspects have also yet to be confirmed, and detectives are still gathering information.

“We’re working on talking to witnesses who were in and around the house at the time,” Captain Clark of the Santa Cruz Police Department (SCPD) said.

Clark said there appeared to be “some sort of gathering” in the building. There were approximately 10 people in the apartment at the time of the incident, and the Santa Cruz police are gathering different accounts of the situation. Police have not announced any expected motives.

The incident happened at 145 Canfield Ave. near Barson St., two blocks from the local 7-Eleven and site of the recent murder/homicide that happened. Jan. 1.

“The last four months, there has been a significant spike in violence,” Clark said. “I think that’s fair to say.”

Last year, the Santa Cruz Police Department reported an increase in the number of theft, assault, and burglary related cases. In 2009, Santa Cruz also had numerous stabbings, many in the downtown area, including two in the Felix st. Apartments on Nov. 28 and another outside a downtown nightclub on Dec. 19. Neither was fatal.

There was also a total of four homicides in 2009, including the stabbing of Santa Cruz High School Junior Tyler Tenorio on Laurel St. and a shooting over Thanksgiving Weekend on the San Lorenzo Levee path. Saturday’s double shooting brings this year’s homicide total to three.

Clark understands the fears that Santa Cruz residents have and appreciates the concern they show for their community.

“The fact that we get so much media attention when there is an event is very helpful because it raises the awareness of the community,” Clark said. “People understand it and they come out and they engage and work with the police department.”

To Leave anonymous information regarding this incident, call the SCPD tip line at (831) 420-5995.