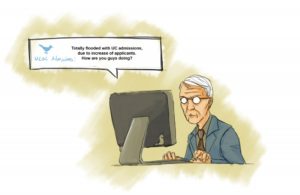 This is the second year in a row UCSC has seen unprecedented numbers, and Michelle Whittingham, the associate vice chancellor of enrollment management, says the trend is indicative of further overall growth.

“We are definitely continuing our upward trajectory,” Whittingham said of the school’s overall reputability.

UCSC’s target enrollment is 3,200 new freshmen, which is a number similar to last year’s frosh enrollment of 3,214. With a larger pool of applicants and the same number of spots available, an even more selective year is on the horizon for UCSC.

“We had hoped for an increase, but this was remarkable,” Whittingham said.

This trend is reflected across the state, as the UC saw an overall 17 percent increase in transfer applicants systemwide. Considering the dismal forecast for the state budget, this may be a lasting effect as more students begin their education at less-expensive community colleges.

“I think this is a trend we will see for years to come,” Whittingham said.

“What you see is the applicant population reflecting the high school graduate population,” Whittingham said. “Demographics having been changing in the state of California, and you can see those changes in both sets of data.”

“It is important, because we exist in California in broader numbers than are showing up on the campus,” Cabrera said. “I feel that it is critical for a university to represent its people.”

While the economy and societal demand for higher education explain the statewide trend, they do not explain why the increase in transfer applicants was so much more noticeable at UCSC in particular. Whittingham attributes the dramatic increase to outreach efforts.

“We have worked really hard to reach out to students and help them achieve their dream of a UC education right here in Santa Cruz,” Whittingham said.

Budgetary restrictions have limited outreach, which previously involved a more extensive physical presence at campuses statewide. But according to Ebony Lewis, outreach coordinator and regional representative for UCSC, this has allowed the university’s outreach efforts to embrace the changing technological climate.

This year, UCSC was one of several UC campuses to host “University of California Day,” a virtual college fair where students could live- or text-chat with Lewis and other members of the admissions staff.

“Because of the budget we cannot travel as much, and this is something new and different,” Lewis said of UC Day. “We’re trying to find ways to connect with students, and you have to go where they are.”