On the northern outskirts of town just past the 7-Eleven, old shipping containers lay behind barbed wire in parking lots of deserted shipping warehouses. The Mission Street extension hits a dead end at an unkempt field of concrete, dying trees and weeds. Hiding behind a larger warehouse stands CrossFit, the second-to-last building, a small garage with its doors rolled all the way up. Just before 5 p.m., CrossFit trainee Dave Cianciulli pulls into the driveway for a Tuesday night workout session. A man in a black hooded sweatshirt waves as the trainee drives up and pulls off his hood, rolls back his sleeves and walks into the warehouse, observing the nearly empty gym. 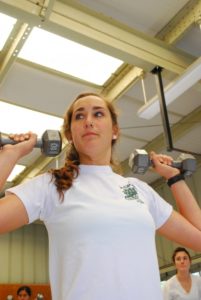 Patrick Barber, a trainer at CrossFit Santa Cruz, is only one of many people working at CrossFit locations now all over the globe.

“I just got back from spending two months in New Zealand,” Barber said. “I helped my girlfriend set up a few things for CrossFit there.”

CrossFit, now an international conglomeration of fitness centers, focuses their programs on high intensity strength training and conditioning. In 2004, CrossFit gyms totaled only four, but since their humble start in Santa Cruz, they have now grown to 1,700 locations worldwide. It offers a high caliber workout that is even used to train police academy recruits, tactical and special operation teams, and hundreds of professional athletes everywhere. CrossFit offers clients a level of intensity and personalization of workouts they can’t find at Gold’s Gym or 24 Hour Fitness.

“We’re different because we don’t say, ‘I want to work on just getting my arms strengthened’ or ‘I just want to tighten my core’,” Barber said. “Instead we want to swim the fastest, run the longest, weight lift the most — we want to do everything.”

Every day a Workout of the Day, or ‘WOD,’ is posted on CrossFit’s website. During each session, the small garage of CrossFit Santa Cruz houses at most 15 people, a shocking contrast to the 50 running on treadmills at 24 Hour Fitness. Barber explained that each member completes the workout with the aid of a trainer, altering the exercises to cater to each person’s abilities.

“Our goal is to maximize work capacity over broad time,” Barber said. “We do as much in every way possible. We push every boundary and constantly expand people’s borders.”

Athletes are always looking for better alternatives to the standard gym, and many have found CrossFit to fill the void.

“The advantage of CrossFit workouts as opposed to standard gym workouts is that CrossFit is constantly varied, consists of extremely functional movements, and is executed at high intensity,” said Selene Teitelbaum, a trainer from CrossFit West Santa Cruz. “[CrossFit] prepares you for anything and everything by constantly changing the stimulus in the workout.”

Teitelbaum is also the women’s head volleyball coach for UC Santa Cruz and a certified CrossFit instructor. She integrates her CrossFit training with her team’s practices.

“CrossFit is the best regime I have found, not only for myself, but for my athletes,” Teitelbaum said. “It is suitable for all sports, especially those like volleyball and basketball which require speed, strength, agility, endurance and power.  CrossFit provides improvement in all of these areas.”

Now with Teitelbaum spreading the word of CrossFit on campus, many UCSC teams are using the service to truly pioneer a new way to train. CrossFit’s use of weight-bearing workouts is new to many teams, but also may bring a higher pay-off when the team regroups during the season for competition. CrossFit approaches fitness in a unique way, giving UCSC teams a leg up over others.

“I haven’t heard of a single NCAA running program in the nation incorporating CrossFit into their training plan,” said Adam Boothe, the UCSC women’s cross-country coach, “so we are really flying on our own here.”

Many athletes have picked up the habit of working out with CrossFit, giving them more than their average, typical training — UCSC’s men’s soccer and women’s volleyball teams along with Boothe’s team have all integrated parts of CrossFit’s techniques into their own workouts.

“CrossFit is also highly competitive, so athletes naturally gravitate towards that,” Teitelbaum said. “It makes the workouts fun, challenging and very satisfying to complete when they are competitive. It also motivates them to improve and is easily measurable to mark your fitness gains.”

With a CrossFit trainer now working in the athletic offices of UCSC, other NCAA-sanctioned teams are picking up CrossFit as another supplemental training tool.

“CrossFit does a few things that I believe can help the cross-country team,” Boothe said. “One, it builds more overall strength than just running, allowing the runners to train at the level they need to, and not get injured. Two, it makes them more competitive, and trains them to deal with competitive pressure.”

Many coaches, like Boothe, are beginning to incorporate CrossFit into their regimen, but they agree the best time to use the program is during the off-season.

“Most of our CrossFit training occurs during the off-season to prepare for season in the fall,” Teitelbaum said. “During season, our practices and competition are physically intense enough and we don’t do CrossFit more than once a week.”

“I’d like to have the team doing CrossFit three to four days a week in the off-season, and cut back to one or two days a week during our competition phase,” Boothe said.

CrossFit’s involvement with UCSC athletics is becoming more prominent, but some safety concerns have arisen even as popularity climbs.

“I’ve been overall really happy with it, some of the concerns that I have are that some of the repetitions are dangerous, such as squats and lunges,” Runeare said. “The workouts are usually timed and sometimes when athletes go as fast as they can, they put themselves in danger because technique goes out the door. I’m weary of that portion of the exercises but we try to keep an eye out for that and we make sure that we teach them the proper instructions.”

With Americans valuing healthy living now more than ever, a massive expansion to the CrossFit name only helps those who are trying to change their lives for the better.

Working out during a 5 p.m. Tuesday night session, the lone trainee knows the truth about CrossFit better than anyone. Dave Cianciulli, who works for a manufacturing company in San Jose and lives on the Westside, takes a water break after an exhaustive warm-up. Grabbing his bottle, Cianciulli wipes the beads of sweat off his forehead with his sleeve, taking a slow swig of water.

“Seven years ago, I started working out at CrossFit under Lauren Glassman, the founder’s wife. I was [just] off the couch, heavy smoker, heavy drinker, horrible diet, couldn’t do a pull-up or more than five push-ups, and weighed 50 pounds more,” Cianciulli said. “CrossFit changes everything, changes your life pattern — even my kids come and workout.”

Cianciulli is hardly out of breath after a constant, fast-paced warm-up.

“It has a huge impact on self esteem; I was in a really sad state. What CrossFit does is it brings you to a much more sustainable state.”

Sustainable, indeed. While the CrossFit pace is hard and fast, their beginners are not always athlete types — that is much appreciated among the trainers such as Barber and Jesse Bazarnick, a UCSC graduate and alumni of the highly-ranked men’s volleyball team.

“It’s impressive to see someone like Jesse, who’s played volleyball all his life and has always worked out, come in and do well. What’s more impressive is when a 45-year-old housewife with no athletic background comes in, and you get them moving. That’s amazing,” Barber said.

The emerging movement due to a rise in the popularity of CrossFit may have also caused a divide between those who live for CrossFit and those who use CrossFit to live.

“Many CrossFit gyms, or ‘boxes’ as they call them, have become far too cultish,” Boothe said. “Many ‘boxes’ attempt to affect every aspect of your life — what you eat, what sports you play, where you workout, et cetera … Some ‘boxes’ also don’t respect that you’re doing CrossFit to help with other pursuits. Not everyone simply likes to be good at working out.”

Other issues have also emerged and are gaining attention in the community. Many are finding the price of a session at CrossFit creeping higher and higher, almost out of reach. Rates are set by each individual CrossFit gym and while figures are still around the same ballpark, it will not be long before the costs skyrocket.

“CrossFit was invented in Santa Cruz as an alternative to expensive gym memberships that never got you in great shape anyway,” Boothe continued. “The original CrossFit website has WODs you can do on your own, however now these CrossFit ‘boxes’ cost members more per month than any gym.”

For some, CrossFit is a movement sweeping the world, something that becomes a lifestyle or a religion. But the true grassroots purpose of the original CrossFit still holds meaning to many in Santa Cruz — to develop their athletic prowess for whatever reasons.

“I would recommend [CrossFit] to any person whether they be an athlete or not, to improve their physical and mental state,” Teitelbaum said. “Almost everyone can benefit from CrossFit and the beauty of it is that any workout can be scaled to match your level of fitness.  So you can have a 70-year-old grandmother, a collegiate athlete and a high school student, all doing the same workout, simply scaled to their ability.  It builds a sense of competition and camaraderie at the same time.”

While there are problems that need attention, the overall impression of CrossFit is a positive one.