Students Walk On for AIDS 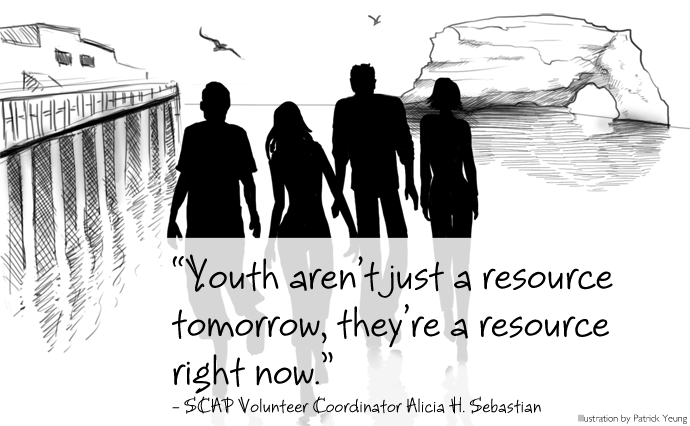 Students lined the aisles in the Biology of AIDS classroom on the last day of lecture, cash in hand, ready to turn in their final projects. About 130 students of the 294 enrolled in the class chose to raise $100 each for the Santa Cruz AIDS walk instead of turning in a term paper for the class, to help fund the efforts of the Santa Cruz AIDS Project (SCAP).

As they waited, the students compared fundraising success stories and nightmares, from the aunt who generously gave $50 to the neighbor whose dog chased them out of the house before they could even ask for a donation. Every dollar they raised and experience they relayed spoke volumes of what they’d learned about AIDS outside the classroom this quarter. And every dollar would become part of the almost $15,000 donation the students of UC Santa Cruz made to the 20th annual Santa Cruz AIDS Walk in 2010, which will take place this Saturday, April 10.

Public health care in California has suffered since the recent state budget cuts, and the funding for AIDS programs has been no exception. SCAP, which puts on the AIDS walk every year, was dealt a crushing blow when funding for HIV/AIDS education and prevention was cut completely from the state budget after California slashed $85 million from AIDS programs last year.

California has consistently had high HIV/AIDS infection rates. The Center for Disease Control ranked the state second highest among the 50 states in cumulative reported AIDS cases in 2008. Because of the prevalence of infection in California, the decrease in funding for these programs has hit organizations like SCAP hard. SCAP Executive Director Merle Smith said the organization has since been kept afloat by the efforts of the Santa Cruz community, especially volunteers from UCSC.

For years both local and student volunteers have played a huge role at SCAP. The organization was founded by a group of concerned citizens in the early 80s at a time when the AIDS epidemic was ravaging the country, Santa Cruz County included. The organization is in its 25th year of operation, and with the help of student volunteers, has weathered the storm of the recent cuts to their state funding to provide much-needed services to the community.

Though some programs have fallen victim to lack of funding, SCAP continues to offer HIV testing, mentoring and a food pantry and transitional housing, among other important services, from their new offices on Front Street in downtown Santa Cruz. The unspecatacular building looks much like any other professional office, and the plain façade doesn’t even hint at the exceptional work that goes on inside.

Every quarter, about 50 students from various classes and majors make room in their packed schedules to devote a minimum of two hours each week to helping the community cope with the effects of HIV/AIDS.

Volunteer Coordinator Alice H. Sebastian, a UCSC alumna herself, said she works primarily with students from her alma mater and is continuously amazed at the hard work students are willing to put in to help members of the community living with HIV.

“They really are doing everything we’re doing,” Sebastian said of the students she manages.

As she speaks, the unmistakably youthful voices of volunteers float into her cubicle in the SCAP building from the nearby rooms. Her words are occasionally cut by the loud thump of a paper cutter. Even in the days after spring break, the SCAP offices are alive with the energy of students.

The option to volunteer as a final project allows students to put their classroom education into the context of the real world, said UCSC biology professor Mary Zavanelli.

Zavanelli requires students who take her Biology of AIDS class to either commit several hours of their time to volunteer organization like SCAP or write a term paper. Not surprisingly, many students opt to spend time with SCAP rather than sit down to write a multiple-page paper.

“I [am] interested in getting the students out and volunteering in the community, because with an issue as complex as AIDS the only way to understand is to get in to that community,” she said. “It’s more broad than you think it is.”

And Zavanelli’s students do get out, in a big way. Sebastian said the class consistently raises at least $15,000 for the AIDS walk each year. UCSC students also comprise the majority of the walkers.

Sebastian’s words quicken as her professional demeanor gives way to one of excitement while describing the reactions of SCAP clients to student volunteers.

SCAP also has long-standing ties to the school, in many different programs. Sebastian said they regularly employ community studies, health sciences, sociology and psychology students, and they work hard to find a place for each individual.

“If you go to other places to volunteer they’re going to say ‘These are our positions, we’re looking for this number of hours to do these kind of things,’” Sebastian said. “We have a very grassroots-based kind of method to doing our work, and even though it’s 25 years later we’re still uniquely designed to use volunteers.”

After consultation with Sebastian, volunteers are placed in positions that allow them to work within their skill set and area of interest, and apply it to AIDS advocacy. Students primarily interested in health care, for example, will be encouraged to find ways to apply their interest to public service.

Sebastian remembered one student who volunteered with SCAP who took his knowledge of health science and applied it to education and outreach to provide a resource for individuals at the drop-in center to identify if they had a staph infection, and then to find their options for treatment.

Selfless as they are, student interns at SCAP get back just as much as they give. Students who work with the organization gain real-world job experience while still being allowed the flexibility needed to put their education first.

“The vast majority of our volunteers are coming from the UC because of the miraculous combination of educated, driven, competent people who are already so busy they don’t mind shoving in an extra five or 10 hours, but they are in this position where they have these skills but they can’t get paid yet — they’re not certified yet to go get the job,” Sebastian said. “So we’re going to help them while they work at the dining hall on campus, or the grocery store, or the retail shop or as a nanny,” she added. “We’re going to help them build their resume so when it comes time to graduate they’re going have a this great recommendation and great experience.”

Emily Bluffi, who graduated from UCSC this winter with a degree in anthropology, said the work she’s done as an HIV test counselor both on campus and with SCAP has given her invaluable experience for a career in the public health field.

“If you’re going to help people in any sort of personal way, sex education or anything that affects their health, I think you have to have a good understanding of people, have a respect for them and be able to respect where they’re coming from,” she said.

Bluffi also emphasized the importance of volunteering within the Santa Cruz community.

“Your college experience should not just be one-dimensional,” she said. “As a student it’s good to have some kind of volunteer job or in some way connect to the community because once you graduate you’re no longer a student, you’re part of the community.”

Students also benefit from working in the field as it takes their study beyond theory and lecture. UCSC fourth-year politics major Eve Pourzan has been able to channel her interest in women’s access to affordable, high-quality health care into her internship with SCAP as she works to help the organization re-establish a community resource center, their former resource center having been a victim of the governor’s cuts to AIDS programs.

“At an organization such as SCAP, you can see direct results,” Pourzan said. “You work with people, you aren’t five steps removed from the actual progress that is taking place.”

The work Bluffi does as an HIV test counselor is one of the results of Pourzan’s work that she gets to watch happen. The organization was recently able to offer testing for the first time since the HIV testing program was cut this summer, a product of Pourzan and many others’ hard work.

UCSC alumnus Sean Lowry stayed on as a SCAP volunteer well past his school-mandated internship because of the opportunity for hands-on learning it allowed. Despite having graduated, Lowry can still be found lounging in the SCAP lobby talking with volunteers and lending a hand where needed, and he seems to be very much at home in the office as he leans back in a desk chair and explains his reasons for sticking around.

“I finished my internship and kept working here because it was more fun to get independent study credit working here than being in class,” Lowry said. “I felt like I was out in the field for six months doing real work, so going back into the classroom just seemed like a step backward.”

Many students like Lowry receive credit from the university toward their major for their volunteer work. But a lot of them stay on because of the things they get from their internships that don’t go on their transcript. SCAP Executive Director Smith believes that volunteering gives students an opportunity to see their education mean something more than grade points.

“It also gives them an opportunity to feel valued. Because a lot of times students get their education and feel like some of the work they’re doing is just to get through. Where, if they’re here, it’s a personal experience that is probably as rewarding as anything they will ever do in their lives,” she said. “When they’re able to take someone who is suffering from the disease but is also hungry back and help them build a food bag to take home to eat — I think that would be moving to anyone, but especially to a student.”

The value of student volunteers goes beyond the general need for unpaid workers. As new developments in science and medicine change the way AIDS is treated, so does the way society treats AIDS. As new vaccines and medications are developed, the problems of the disease have evolved from a death sentence to managing the diagnosis in daily life.

Sebastian explained that students are uniquely equipped to deal with this new era of AIDS advocacy.

“The beauty of having young student volunteers and interns is they can take all this education and bring a new face to it — it’s a new generation of HIV activists,” she said. “This isn’t the HIV community, this isn’t the group that started this organization, these are new people bringing all this in, and they’re not the ones who watched HIV from the beginning, but there’s this totally new perspective on it and that’s amazing,” she added. “There’s something beautiful about having student interns who are coming in at this time and shifting the concept around HIV activism. It looks different, and it needs to look different.”

The face of AIDS advocacy is changing, providing opportunities for students to make a much larger contribution to society than they have in the past. SCAP’s volunteers are using their education to utilize their skills in ways students haven’t before.