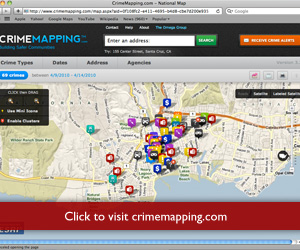 What if there was a website designed to place crimes on an interactive map immediately after they’re reported, allowing members of the community to view the nature of the crime, the exact block where the crime took place, and the exact time at which it was committed? Sounds revolutionary, doesn’t it?

For Santa Cruz, the revolution has begun.

With CrimeMapping.com, a website that the Santa Cruz Police Department (SCPD) began partnering with about two weeks ago, current information that was once more difficult to attain is now available to the public with the click of a mouse.

“We’ve had crime-mapping for a couple of years, but the maps were static,” SCPD spokesperson Zach Friend said. “We were receiving requests for more updated information or the ability to search by address.”

CrimeMapping.com allows users to view individual occurrences of specific crimes — like burglary, assault, and DUIs, for instance — as well as observe trends over time.

“Every 24 hours, agencies upload their data … once it’s set up, it requires zero effort,” said Talal “Trip” Albagdadi, Director of Marketing for The Omega Group, a privately owned company that launched the site.

Although CrimeMapping.com is barely two years old, The Omega Group has been providing crime solutions and working with law enforcement agencies for much longer.

“We’ve been doing this for 18 years,” Albagdadi said. “We never, ever scrape data from other sites.”

Albagdadi considers CrimeMapping.com powerful, both as a source of information and as a preventative tool against crime.

Multiple police departments nationwide have caught on and begun partnerships with the website — like Fort Worth, TX, and Sarasota, FL — but numerous large cities like Los Angeles and New York City remain absent from the list of viewable agencies, making Santa Cruz one of the pioneering cities.

Between March 29 and April 5, there were 11,000 unique people visiting CrimeMapping.com from California, said Albagdadi. Of that number, 2,218 of them were from Santa Cruz, a large portion for a relatively small city.

In response to these requests from the community, the SCPD began to look for new services that would provide these features.

“This was the easiest to integrate in our records management system,” SCPD spokesperson Friend said.

For the community of Santa Cruz, CrimeMapping.com is making waves because it instantaneously extracts data from police department records. A process that was once time-consuming for the department is now automatic.

“People didn’t recognize the workload of the department or the amount of crimes occurring in the neighborhood,” Friend said.

“[CrimeMapping.com is] an incredibly great tool because it’s real-time,” said Deborah Elston, a founder of the nonprofit organization Santa Cruz Neighbors. “The moment a crime is committed and has a crime number assigned to it, it makes it to this map.”

Representing a collection of neighborhoods in the city, Santa Cruz Neighbors provides resources for community members interested in local organization and also partners with other institutions — like the SCPD, for instance — to provide a voice for the community.

“The police cannot be everywhere,” Elston said. “The neighbors are the eyes and ears to keep the community safe.”

Elston added that the high concentration of crime in some areas of the map, particularly in downtown Santa Cruz, should not turn people away from the affected areas.

“If you feel like you want to help make a difference and help crime go away, you don’t go away from it; you go toward it,” she said. “The more residents and neighbors are engaged in the community, the more involvement the community has in high-crime areas, [the more] that crime will go down.”

“Sometimes one of the most difficult things to provide [residents] is the reality they’re living in. With the website, you can judge for yourself whether there are issues in the community,” Friend said. “If the community has the knowledge, then they have the power.”