UC Santa Cruz Professor Garth Illingworth has been using the Hubble Telescope to peer across the universe through space and time. He compares his study of early galaxy formation to an 80-year-old man looking back on his days as toddler.

Illingworth and his team of investigators are utilizing the recently repaired and updated piece of equipment to look to the other side of the known universe from where the 13 billion-year-old light is just arriving now. Experts estimate that the universe is about 13.7 billion years old, so these images are a snapshot back to the galaxies as they appeared just 650 million years after the big bang and the dawn of cosmic time. The images are deeper in the universe than any astronomer has ever gazed and farther back in time than anyone has ever seen.

“The light has taken so long to reach us that we’re really looking back in time,” Illingworth said in his strong Australian accent. “It’s the only time we can really do that.”

The Hubble Telescope, currently in orbit around the earth, is only about the width of Illingworth’s office — a mere 2.4 meters. But for the past 20 years, Hubble has been taking some of the most stunning pictures in the field of space exploration. The most recent repairs to Hubble have allowed Illingworth to take the best images yet. Some of the photographs required four days of exposure time.

Illingworth and his co-investigators have dubbed the project the Hubble Ultra Deep Field program, or HUDF09. Right now, they are in the thick of research and documentation.

On a Friday afternoon as most students and teachers are getting an early start on their weekend, the professor is just getting comfortable in his office on Science Hill with his shoes kicked off, revealing his thin black socks. He holds his head in one hand and a blue pen in the other. Illingworth is hard at work, making corrections to an essay he and his colleagues submitted last December to “Nature,” a scientific journal. The journal’s editors would like to see a second draft from Illingworth and his colleagues before they consider running the story in an upcoming issue.

Contention and disagreement about what makes good writing and research are nothing new to the field of astronomy. Scientists are trying to figure out the reasons and physical characteristics behind phenomena such as black holes, super novae, and dark matter. But the feeling of rejection, if only temporary, still feels odd to Illingworth.

“For us, it’s pretty uncommon to be told, ‘it shouldn’t be published,’” he said.

That’s because UCSC’s Astronomy and Astrophysics Department is one of the best in the nation. World-renowned department chair Sandra Faber has recently been granted a record 902 orbits on the Hubble telescope to survey 250,000 distant galaxies and study the first third of cosmic time. Professor Stan Woosley and his colleges have made groundbreaking discoveries on gamma ray bursts. And UCSC’s group of researchers is the most cited worldwide.

They also have access to the world class facilities in Lick Observatory in San Jose, where Illingworth spends some of his time, and Keck Observatory in Hawaii. The observatory has the world’s second largest telescope at 10 meters.

The images from HUDF09 have been made public and can be studied by anyone, but it was Illingworth and his team’s proposal and attention to detail that won them the bid. In the world of space discovery every detail matters. Illingworth says each of their 192 orbits on the telescope costs National Aeronautics and Space and Administration (NASA) $100,000.

Astronomers, like Illingworth, say the money is well spent and that they are searching to find answers in the universe and our place in it.

Weight of the World 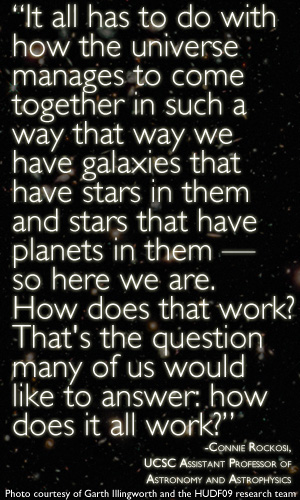 At 30 years old, assistant professor Connie Rockosi could be seen as the next generation of astronomy at UCSC. Much of her office’s hallway in the Interdisciplinary Science Building is dominated by older and middle-aged men.

Rockosi is studying the organization and composition of the Milky Way and nearby Adromeda Galaxy in order to try and determine just how galaxies form.

“People have called the thing I do galactic archeology,” Rockosi said. “[We’re] trying to understand what the universe was like when the galaxy formed by looking at things left over from that period of time.”

Rockosi’s artifacts are planets and stars — the older, larger, and more nearby, the better. But in the world of astronomy, “nearby” is a relative term. The closest star besides our sun is more than four light-years away — over 25 billion miles in distance. Rockosi says the stars she studies are “unimaginably far away in human standards,” but that the light now reaching us “left its source a very, very tiny fraction of the universe ago.”

The milky way formed and grew over the course of millions of years as clusters and galaxies collided into one another finding themselves sucked into the mutual attractions of each other’s gravitational pull. Many of these stars have already died and been reborn several times. The chemical composition of these celestial bodies and the periodic elements found inside them tell her just how many times the stars have died and more about their life cycles.

Rockosi’s survey of 300,000 stars will also help scientists determine the mass of the Milky Way. Rockosi is taking part in efforts to help weigh the Milky Way. The complicated procedure involves finding large stars and measuring their gravitational effects on the rest of the galaxay.

Graduate student Valentino Gonzalez has been working with Illingworth on HUDF09 and says that Rockosi is telling a different part of the same story that Illingworth is trying to tell. While Illingworth and his team of investigators are looking at images of distant galaxies, Rockosi is examining our own Milky Way, digging for clues into the past. They are both trying to learn how galaxies form.

“It all has to do with how the universe manages to come together in such a way that we have galaxies that have stars in them and stars that have planets in them — so here we are,” Rockosi said. “How does that work? That’s the question many of us would like to answer. How does it all work?”

Professor Stan Woosley, an expert in super novae and stellar explosions, found his area of interest by accident. Fascinated in the creation of elements since he was a young child, he later learned that all of the known elements, besides hydrogen and helium, were made in stars. So, while a super nova is the death of a star, he doesn’t think of it as an event of destruction.

“It’s creation,” Woosley said. “We are stardust. We are the children of the stars. This is true. … For there to be life, there has to be carbon and silica and iron and oxygen and heavier elements. Those all came from stars and mostly from super novae. Super novae are explosions, but they are creative explosions. They are the furnaces of creation that are spewing out elements of life all over the universe.”

To demonstrate a point, Woosley grabs a green plastic gun and starts pulling the trigger, trying to get it to work.

With some frustration, the 65-year-old professor shakes the small toy, which most days, he says, emits rings of smoke similar to the shells of light released in some super novae. After some persistent and playful rattling, he gives up, sets the gun down and smiles.

In 2007, Woosley took the scientific community by storm when he discovered those shells of light and used them to explain a stellar explosion 100 times brighter than a typical super nova. Most super novae only convert 1 percent of their kinetic energy into light because the light gets trapped in the star as it expands. But a Type 1a super novae, Woosley has discovered, can release more light because it escapes in large shells as the star explodes.

Woosley has made other groundbreaking discoveries as well. In the 1990s he discovered the origins behind gamma ray bursts, mysterious electromagnetic flashes which had puzzled scientists for over 30 years. Woosley found that the bursts have a close connection with super novae. According to his now widely accepted collapsar model, the gamma ray bursts shoot out of a dying star large enough to create a black hole and implode.

Woosley calls himself “probably the greatest skeptic of my models,” many of which are widely accepted by encyclopedias and scholars everywhere. He is not particularly concerned with making new discoveries. He prefers teaching, experimenting, and sharing perspectives with those around him.

“People like my ideas. I’ve got prizes. I’m in the National Academy of Sciences. I’m in the National Academy of Arts and Sciences,” Woosley said listing off his accomplishments as if tired of them. “I’ve got the Beta Prize of the American Physical Society, the Rossi Prize of the Astronomical society, so yeah, I’ve made it, OK? Nowadays, I just like to be left alone.”

“The Universe is old,” says Illingworth, a hint of nostalgia in his voice.

About 10 to 11 billion years ago, the universe experienced its peak in galaxy and star formation. He says the night would have been lit with bright, glowing galaxies across the sky. Illingworth leans forward closer to his two 30 inch computer monitors and points to a line graph that shows the peak of galactic activity hovering at about 3 billion years after the big bang.

“Every year that goes by, less and less things are happening in the universe,” Illingworth said. “In that sense, it’s in its quiescent phase. The universe will slowly get cooler. Things will spread out more. The galaxies won’t be as bright. There’s just not very much happening.”

The time Illingworth has been studying was more densely packed with stars, planets, and galactic activity than our own. He calls research like his “cohesive” for society. He says that Americans can celebrate space exploration together because they are curious, and they find it important.

“The tax payer funds these sort of activities” he said of his research. “It’s a tiny fraction of the country’s budget, but it returns a lot, and I think it’s socially important too.”

In 2008 the United States spent a total of $17.8 billion on NASA’s research funding, space exploration, and educational costs — .6 percent of the United States budget for that year. Professor Illingworth, Professor Woosley, and graduate student Gonzalez all note that when a country achieves financial stability and success, one of the first things they do is invest in astronomy. Even Chile, where Gonzalez grew up, is known for its world class observatories.

NASA is currently planning for their decadal survey, which comes out this summer and for which they plan out many of their next projects for the next ten years and present the estimated costs to Congress. At the top of their list is the James Webb Space Telescope (JWST), which is slated to cost five billion dollars. The telescope will sit in space, just beyond the moon and orbit around the sun. The telescope is going to be the next Hubble — but larger, more powerful, and with less light pollution from the earth.

Scientists hope to put the JWST into space by 2014, around the time that the 20 year old Hubble Telescope is expected to fall into inescapable disrepair. To some, it may sound like just another telescope. But to Illingwoth, it’s another time machine.

“We’re exploring our origins,” Illingworth said, “which is what this all is about.”