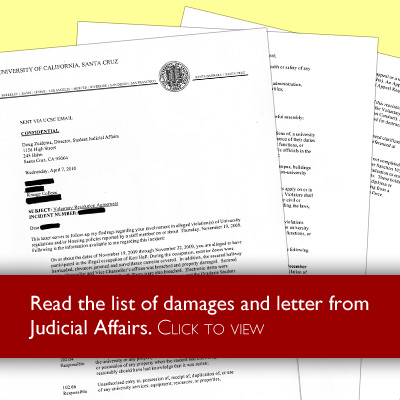 Thirty-five students are now responsible for a payment to the university of nearly $1,000 each to cover the damages to Kerr Hall.

Forty-five students received summons nearly two months ago regarding events in the 66-hour illegal occupation of Kerr Hall in November. In a follow-up of student judicial affairs director Doug Zuidema’s fact-finding investigation, 36 of the 45 were found responsible for violations of the Student Policies and Regulations Handbook (SPRH).

On April 7, the 36 students were issued letters of “Voluntary Resolution” requiring a restitution of $944. One individual was found not responsible for the violations yesterday in a meeting with Zuidema, lowering the number to 35.

University spokesperson Jim Burns said Kerr Hall sustained $34,992.02 in damages during the occupation. Restitutions were intended to divide the total cost equally among each of the 36 student participants.

“They were determined to be active participants that were involved with an occupation that led to $34,000 of damage,” Burns said. “These students participated in a demonstration that left the university with the bill and these students are responsible for payment.”

The “Voluntary Resolution,” as written and determined by Zuidema, described the sanctions — including the restitution — and were distributed April 7.

According to a resolution letter provided to City on a Hill Press, the restitution declares the individuals fiscally responsible for damages.

“You will be responsible for making restitution to Kerr Hall in the amount of $972.00 by June 30, 2010. Payment is to be by check or money order made payable to UC Regents, delivered in person to Student Judicial Affairs (245 Hahn).”

Restitutions are issued in accordance with section 105.09 of the SPRH.

“Please note that the restitution amount ($972) indicated in your Voluntary Resolution Agreement dated April 7, 2010 is incorrect,” she wrote. “The actual amount of restitution is $944. This correction has been noted in your file.”

Multiple students were found responsible for the same 10 charges delineated in the resolution letter.

Second-year undergraduate student Gabi Kirk was among the students found responsible for the 10 violations of the Student Policies and Regulations Handbook and given the $944 restitution.

The property form Kirk completed in order to retrieve her possessions from the University Police in November was used as evidence in her meeting with Zuidema.

The UC Police collected items left behind after the occupants vacated the building. Kirk said that the property form does not prove guilt.

“[The property form] doesn’t indicate anything, it is clearly no proof of theft,” Kirk said. “I’m not paying $1,000 for something I didn’t do.”

Section 104.20 of the Student Policies and Regulations Handbook (SPRH) determines that “the final authority for administration of student discipline rests with the chancellor.” As such, 85 faculty members addressed a letter regarding the resolutions to Chancellor George Blumenthal expressing their skepticism of the judicial proceedings surrounding Kerr Hall.

The letter read, “The actions at Kerr Hall were collectively executed by a group of considerable size and diversity, in public expression of grievance against the University. The proposed resolution does not separate accusations of criminal behavior from protected speech acts; it implies that any form of participation in these actions is tantamount to vandalism. Such an equation will have a chilling effect on necessary speech and debate in the campus community. The ‘Voluntary Resolution’ agreements present an implicitly constant threat of criminalization in cases where the University has a substantial stake in minimizing the effects of a coordinated protest action.”

Several students were found responsible for 10 identical charges. Twenty-nine of the 36 students were issued a warning as well as the restitution and seven individuals were given more severe sanctions, ranging from probation to dismissal. Burns stated that the seven individuals who received more severe sanctions had previous violations to the SPRH.

“Prior misconduct factored into the decision in the cases of those who received more than a warning,” Burns said.

Those who received the resolution were eligible to submit an appeal — the deadline was April 14 at 4:00 p.m. The appeal process can be pursued in two possible ways — a written appeal to an Appellate Officer or a request for a hearing before the Campus Judicial Board (CJB). The CJB comprises two staff members and three members of the Student Union Association (SUA).

Vice Chancellor for Student Affairs Felicia McGinty or a designee will be the Appellate Officer in the cases of written appeals, as described in Section 107.60 of the SPRH.

Section 108.21 of SPRH outlines the constraints of appealing; resolutions that include a warning, regardless of inclusion of a restitution, are limited to a review by the Appellate Officer. Those who received a sanction of greater severity are eligible to pursue either the written appeal to an Appellate Officer or request for a hearing in front of the Judicial Board.

“In most of these cases, the appeal will be in writing,” Burns said. “The request for a formal hearing is only available to the seven students [who recieved sanctions more severe than a warning]. Irrespective of the restitution, if someone receives a warning they can write an appeal.”

As stated in section 107.62, McGinty or a designee will make a determination on the findings of the appealed case.

“Upon completion of review, the appellate authority may affirm, modify, or reverse the recommended finding(s) and/or sanction(s).”

Students are limited to one level of appeal. As such, cases close after completion of the vice chancellor’s review.

In a Formal Hearing, the accused student may present the Campus Judicial Board with documents and witnesses, and the CJB will make a determination based upon the evidence. Upon reaching the decision, the CJB submits their decision to the Vice Chancellor of Student Affairs, Felicia McGinty. McGinty may “modify the recommended findings or sanctions received from the Campus Judicial Board,” as stated in section 108.37 of the SPRH.

Among the 36 individuals who received the restitution were a student journalist and a negotiator. The student journalist, fourth-year Kenji Tomari, a reporter for The Project, was one of three student journalists present during the occupation that spanned three days. Representatives from City on a Hill Press and TWANAS were also present.

Though Tomari met with Zuidema and explained that the extent of his involvement at Kerr Hall was limited to his role as a reporter, Tomari, along with 35 individuals, received his resolution — including the restitution of $944 — on April 7.

The negotiator who received the restitution, recent graduate Olivia Egan-Rudolph, was one of five negotiators acting as a liaison between the administration and those in the building.

“Dialogue was important in that situation,” Rudolph said. “I wanted to make sure it was resolved in a peaceful way and demands were negotiated.”

Three of the five negotiators received a summons, and Rudolph was the only one out of the three to receive the resolution, including the restitution of $944.

Rudolph was cited with sanction 105.05 of the SPRH — suspension. She also is restricted from campus. As a recent graduate, the circumstances of Rudolph’s suspension are unique. Per her understanding, Rudolph’s degrees may be withheld until December of 2010.

One student, who wishes to remain anonymous, received the resolution letter though she was never present at Kerr Hall.

Sydney Clark* met with Zuidema on April 13 to relay that she was not affiliated with the events at Kerr Hall. Zuidema presented her with the evidence that had been used to determine her presence — a photo of another female student participating in the Kerr Hall occupation. Clark was identified by a staff member when the image was cross referenced with a photo of Clark that was on file.

After the meeting, Zuidema determined the photo was not of her and deemed her not responsible for the restitution and her warning was dropped.

Until her meeting with Zuidema on April 14, Clark was among those found responsible for all 10 violations of the Student Policies and Regulations Handbook.

*Name has been changed