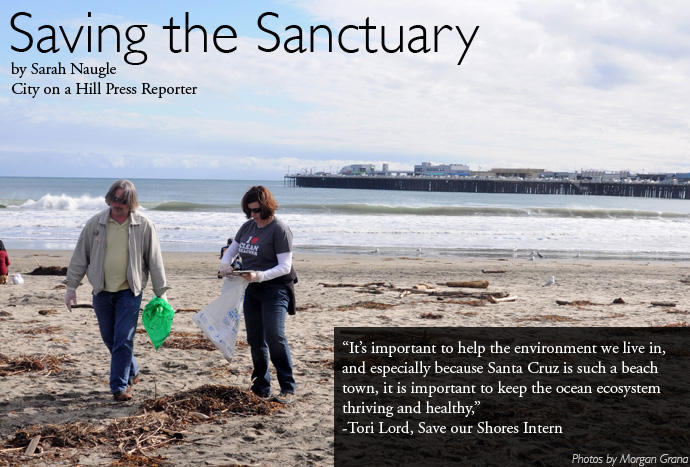 A child drops a hypodermic needle into a biohazard box with a poster draped over it that reads “Save Our Shores.” The box is already host to several needles found at the beach that day. The child is volunteering at a cleanup on Main Beach, in front of the Santa Cruz Beach Boardwalk. Save Our Shores organizes cleanups throughout the year to preserve the local environment of the Monterey Bay Marine Sanctuary.

Save Our Shores is a local nonprofit organization based in Santa Cruz that organizes cleanups and raises awareness of threats to the marine ecosystem. Whether for monthly cleanups, where any community member can participate, or group cleanups, where specific organizations participate, Save Our Shores motivates the community to volunteer to preserve the marine environment in which they live. The organization’s pamphlet reads, “We show them how their actions affect the marine environment, and offer the choice to make a positive impact.”

Save Our Shores has served to facilitate a “thriving and healthy marine ecosystem as a result of an informed and compassionate public” in the Santa Cruz area since they fought offshore drilling on the central coast 20 years ago. In order to prevent offshore drilling, Save Our Shores has traveled across the state since 1985 to gather support for offshore drilling prohibition. The momentum the organization generated during their campaign across California provided support for the establishment of a National Marine Sanctuary. In 1992, the Monterey Bay National Marine Sanctuary was established, and since the sanctuary’s conception, the organization has influenced cleanup in the protected area they helped establish.

At their watershed cleanups, Save Our Shores provides volunteers with supplies for cleanup; such as receptacles for collecting trash along the waterways, gloves, the biohazard box, and cards to keep tally the types and quantity of trash found. Before letting the volunteers loose on the litter, a Save Our Shores representative gives a short presentation about the amount and types of trash found in marine ecosystems.

“It’s important to help the environment we live in, and especially because Santa Cruz is such a beach town, it is important to keep the ocean ecosystem thriving and healthy,” said Tori Lord, an intern with Save Our Shores and fourth-year environmental studies major.

Save Our Shores’ office sits on the harbor, its front windows looking out onto the sea of docked sailboats. Here, the nonprofit organizes monthly waterway cleanups throughout the Santa Cruz area, with both specific groups and the general community.

Last year, Save Our Shores collected over 26,000 pounds of trash and 9,000 pounds of recycling, a total that was reached by adding up the quantity of trash collected from all of the cleanups they run throughout the year.

Trash collected at local waterways contributes to this amount. Save Our Shore’s mantra, “Awareness, Advocacy, Action,” is now being directed at the rivers as well.

“We are starting to run more river cleanups, because they are in much worse condition,” said Emily Glanville, Program Manager at Save Our Shores. “We’re really focusing our education on pathways of pollution. I think we have gotten people to not litter on the beach, but we want to foster that kind of awareness for all watersheds.”

Save Our Shores has begun to focus on rivers and all waterways in the area because they eventually lead to the ocean and are contributing to the amount and type of debris found on the beaches and in the marine habitat.

“Our beaches are getting cleaner because we run a ton of beach cleanups. We hope that it is because of the awareness [we’ve raised],” Glanville said. “Our rivers are a different story. It is much easier to leave a mess at a river. I think that people have a hard time connecting the trash on the rivers and the harm that it causes.”

Despite Save Our Shores’ increased involvement in river cleanup, it has not decreased its involvement with ocean conservation. They still conduct the same number of ocean cleanups.

Glanville said that the high levels of traffic and people that frequent the rivers furthers the importance of their involvement with that endeavor. The debris found at the rivers includes heavier objects, such as tires, washers, dryers and other various household items. The trash typically found on the beaches usually consists of significantly lighter items, like cigarette butts and bits of paper.

Much of the garbage picked up at their beach cleanups — like the one at Main Beach — is in fact attributed to runoff from rivers. For example, the San Lorenzo River pours into the ocean at Main Beach and deposits trash from the river onto the shore.

Needles, like the one found at the Main Beach cleanup, are among the various types of copious amounts of trash found at watersheds and oceans throughout the Santa Cruz area. They indicate how the beaches and the rivers are connected.

“It’s weird, cigarette butts used to be the main thing, now we are finding more condoms and syringes,” said Jessica Glanz, an intern with Save Our Shores, as she stands behind the table, instructing volunteers on the proper methods of trash disposal at Main Beach. Glanz is a Clean Boating and Sustainable Seafood Intern with Save Our Shores and a third-year marine biology major at UC Santa Cruz.

Inhabitants along the rivers may be contributing to the increased presence of needles and other drug paraphernalia being found on the beaches.

“There might be a few people who use on the beach but it is from the homeless encampments on the river and then the river washes them into the ocean,” said Dennis Gagne, Save Our Shores volunteer.

Save Our Shores does not intervene with homeless encampments, but they do acknowledge the damaging effects of such infrastructure on the environment.

“We don’t ever break up homeless encampments. It’s a hard situation that I feel has not been addressed correctly,” Glanville said. “From an environmental perspective, it is bad to have people living along the river without bathrooms, but without the proper infrastructure coming from the city and county, there isn’t anywhere for these people to go.”

Getting Their Hands Dirty

To facilitate community involvement, Save Our Shores works with community organizations ranging from grade school children to adult sport leagues, coordinating things like beach adoption. In the adoption process, an organization will adopt a local beach and then participate in a minimum number of beach cleanups at their locale.

One blustery February afternoon, at the cleanup aforementioned, nearly 30 Santa Cruz Roller Derby Girls and members of their families showed up to their newly adopted beach, Main Beach, to do one of the three mandatory beach clean-ups required as part of the adoption process. Main Beach is a place that many of the Derby Girls have frequented.

“A lot of our girls grew up here and have an affinity for the beach and keeping the beach cleaned up,” said Derby Girl Salt Ann Battery. “Having grown up here, a lot of us want to help out and because Santa Cruz supports us, we want to show that we are thankful and set an example of community support.”

The cleanup illustrated the intertwined relationships of the community, the beaches and the rivers.

Save Our Shores works with groups of children frequently, and in light of the debris being found, volunteers are fearful for the youth present at the cleanups.

At the office, Kate Purcell, volunteer coordinator with Save Our Shores, described how the dangerous debris is especially a cause for concern at cleanups with school groups.

“Needles and syringes have increased and it is really worrisome for us, because we have so many school groups who go out,” Purcell said. “It is just scary.”

The possibility of needles and syringes lurking beneath the surface has prompted the staff at cleanups to make a request to children at play.

“Sometimes we recommend that kids don’t dig, because there might be hidden danger. To me, that’s just so sad,” Purcell said. “One of those quintessential childhood experiences is threatened because of the mess.”

Save Our Shores has each volunteer carefully mark what items they collect at cleanups to ensure a thorough bookkeeping of the type and amount of trash collected at each cleanup. The removal of syringes and needles factor in to keeping the beaches safe.

“The state beaches would be pretty dismal without the beach cleanups,” Purcell said. “Save Our Shores is really providing a service to the community. We’re keeping them safe. People don’t realize that cleaning the beaches keeps it safe for children.”

As of mid-March this year, Save Our Shores had collected a total of 2,764 pounds of trash, and 797.5 pounds of recycling at their 18 beach cleanups and 11 river cleanups.

Their close tally of the types of litter picked up at the cleanups allows them to generate accurate and helpful breakdowns of the data.

The amount of trash that Save Our Shores removes from all watersheds reflects the organization’s role in continuing to preserve the sanctuary they fought so hard to establish 20 years ago. The nonprofit continues to preserve the community and ocean ecosystem that hundreds of marine animals and nearly 700,000 people that live along the Monterey Bay coast call home.