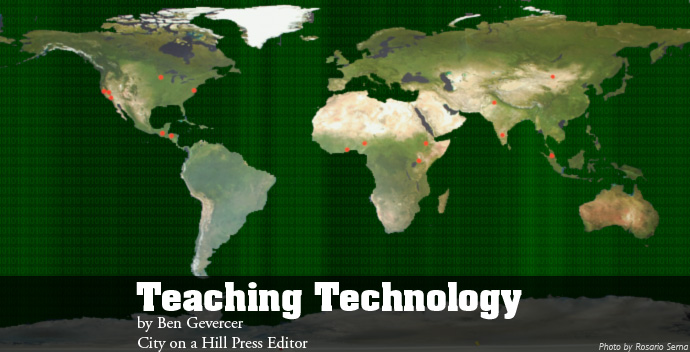 Located on the corner of the third floor of Social Sciences 1, the Global Information Internship Program’s (GIIP) office is small and easy to miss. The office, a single room about half the size of a small classroom, is filled with old swivel chairs and computers. On the wall hangs a topical world map with little red stickers jutting out, marking where GIIP’s members have traveled.

The room is a hub for student interns involved in a new era of activism, one that combines the passion of a community organizer with the know-how of savvy tech-junkies. New technological innovations have allowed nonprofits to expand their support and fundraising across the globe. And GIIP interns at UCSC are leading the way.

Pronounced “jeep,” GIIP is an internship and class for UC Santa Cruz students that teaches students about global developmental inequality, and then sends them out in the world to solve a pressing problem. Some students have trained nonprofits in Africa in useful technological skills, while others worked in central California building links through digital storytelling between first-generation American children and their immigrant parents.

“It takes internships to an entirely new level,” said co-chair of GIIP’s Global Advisory Board Dana Priest, a UCSC alumni and two-time Pulitzer Prize winning reporter for the Washington Post.

“You’re creating your own program, you’re responsible for finding money,” she added.

GIIP is the brainchild of Paul Lubeck, a sociology professor and the current director of GIIP.

“We try to show the interconnectedness of global social networks and technology networks,” Lubeck said, explaining the organization’s mission, “and how the two can work together.”

Lubeck, who has sandy grey hair, a goatee, and square glasses, explained that the organization stemmed from student complaints about a sociology class that he was teaching in 1998, World Society.

“The student evaluations for the class said ‘This is a great class. It changed my life, but it’s so depressing. Lubeck should provide Prozac,’” Lubeck said. “Others said I was a hypocrite for not suggesting an alternative [solution] for students.”

Lubeck reacted and formed the idea of getting students involved in order to address these changes using technology. “In ‘98-’99, we began to imagine a civil society project to train students to use information technology to democratize globalization, to advance social justice,” he said.

After 12 years, GIIP has transformed from an idea to a full-fledged academic program. Last summer, GIIP became a major and a minor. The sociology department now includes an honors major and minor, Global Information and Social Enterprise Studies (GISES), that is modeled after GIIP. Lubeck said that this program was lucky to come into existence, as it was approved right before the beginning of the large budget cuts across the University of California.

After spending time in the program, many GIIP students take a leadership role in the organization, becoming what GIIP calls “Fellows.”

“Fellows … are selected by existing Fellows, and commit five hours [a week] of unpaid labor to building GIIP,” Lubeck said. They hold office hours, organize the program’s administrative tasks, and some teach the tech skills they have learned to other students.

All UCSC students are eligible to get involved with GIIP, not just those who desire to become Fellows or students who declare the GISES major or minor.

Every year, GIIP offers a three-quarter class series called Sociology 30A, 30B, and 30C, which are taught by faculty members and GIIP Fellows.

“Each quarter, we teach something a little different,” said Cat Priestly, a second-year politics major from Cowell College and GIIP Fellows coordinator.

Students learn about the different types of social activism, how to write project proposals, and tech skills like web design and managing mass text messaging campaigns.

“The first quarter is mostly the theory of social entrepreneurship and the sociology behind helping people,” she said. “There is so much more that goes into it than showing up and giving someone a computer.”

After studying global economic underdevelopment and examining its causes, GIIP students are required to write their own plan to implement social change using technology.

Plans can be based anywhere in the world, and students spend the next two quarters refining and developing it. They then learn the practical skills to implement this project by writing a detailed project plan, heavily critiqued by GIIP faculty and Fellows. The next step is writing grants to fund their project.

“If you work in any organization, you have to learn how to write in this really concise way to get your point across to funders, and have to learn how to use their language and their framing and structure,” said Cat Priestly, describing the technical details of a grant proposal.

To finance their projects, students can receive some money from GIIP, but also must pitch their ideas in the form of grants to other nonprofits or foundations.

Each quarter, classes meet twice a week. In one class, students work in a tech lab, learning skills like website design, organizing computer data, and digital story telling. On the other day, students learn the empirical approaches to social activism, flesh out their proposals, and learn grant-writing techniques.

“I feel like I’m getting something done and doing something important,” said first-year GIIP Fellow Anna DeChant one afternoon while holding her office hours. DeChant is currently designing a project to help set up online medical records.

“The classes give you tools that are actually useful,” DeChant, a health sciences major from Merrill College, added.

GIIP is a model for training a new generation of social activists. While carrying the same passions for justice and sustainability, these new community organizers do not hold a clipboard or hand out pamphlets. Instead, they communicate through text messages and e-mail, and connect through websites, blogs, and Twitter. Now, an iPhone or an Android phone can do what mass mailings or a telephone drive could only dream of. An online presence for nonprofits like a website or social networking page can allow for possible donors and followers worldwide to stay tuned in.

This new community organizer is not only passionate, but technologically sharp, able to create websites, use social networking tools for mass communication, and then blog about the work.

Ian Anderson, a third-year GISES and mechanical engineering major from Cowell College, is a GIIP Fellow and co-teaches a GIIP class about text messaging and other communication strategies. Last summer, he traveled to Nigeria on his GIIP-sponsored project to teach nonprofits how to utilize new technologies. While in Nigeria, Anderson collaborated with several other nonprofit organizations, including the Santa Cruz-based International Health Program.

“I used different technologies, and showed what technologies they could get online for free or with minimal costs,” he said.

“Many nonprofit organizations in Nigeria had little or no money,” Anderson added.

By using the internet, these organizations could download programs cheaply to build a web presence for an organization, organize a mass text messaging campaign for medical care, or create electronic medical records systems for the local Nigerian communities.

Anderson also taught these organizations how to mass communicate through cell phones, using a similar lesson plan to the one he is currently teaching to other GIIP members.

In many developing countries, cell phones have become an inexpensive way to communicate. In most countries, there are no cell phone plans, like in the United States, but many people can buy calling cards that are relatively cheap. In 2008, the New York Times reported that there were over three billion mobile phone users in the world, and the number is rapidly growing. Much like the ones used by college students in the United States, many of these phones have an essential function: text messaging. This source of almost instant communication is beginning to be utilized by organizations and governments to distribute information to vast quantities of people.

“There is a whole group of mobile applications — [like] FrontlineSMS — tools to help you manage text messaging campaigns for education,” Anderson said.

He continued, “You can send out information to AIDS patients, telling them when to take their drugs, send text messages to everyone in a certain area saying this is what services a clinic offers.”

Anderson credited GIIP with opening his eyes to a world of activism. “I didn’t even know this kind of world existed of tech-related nonprofit,” said Anderson, who has been in GIIP since he came to UCSC.

“GIIP gave me the foundations. Either through the classes or through the connections I made at GIIP, I learned everything,” he said.

The Price of Going Global

Sending students across the globe is not easy, and it sure isn’t cheap. On April 29 in Washington D.C., GIIP will launch its first endowment campaign. The kickoff event is a speech by Dana Priest at the University of California’s Washington D.C. campus about emerging technologies in politics and journalism.

“I’m going to be talking about the nexus between technology and social change in Washington,” she said. “I hope to talk about my own work in journalism and how 2.0 investigation tools help print journalism.”

The endowment campaign is an effort to raise $10,000, which will be matched, in full, by a donor.

“It’s our big deal right now,” said Cat Priestly, the GIIP Fellows coordinator. “[The campaign] would make us sustainable — we’re all about being sustainable,” she said.

Barack Obama’s 2008 presidential campaign is the most recent and successful example of the melding of social activism and technology. The campaign used text messages and e-mails to raise millions of dollars and to excite its supporters.

“[Obama] had a spectacular model of community organizing and a very storing network base of fundraising at a micro level,” said Professor Lubeck.

This model has proven that it works well, but it has also enthralled those involved in it.

“Once you start spending your time on social causes, it’s almost hard to justify not doing it,” he added. “I could be going to these classes and try to get a job making a lot of money, but how would that be more successful than doing something that’s going to help other people?”