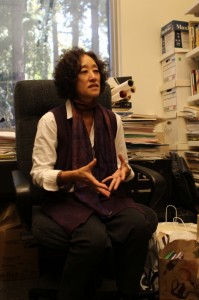 Karen Tei Yamashita, literature professor and co-director of the undergraduate creative writing program, was nominated for the 2010 National Book Award for her newest novel, “I Hotel.”

Sitting in her prodigious chair in the middle of her library, where shelves filled with her Asian-American literature collection keep her walls standing, other texts make edifices on her office floor. Here, Yamashita embodies her work.

Prior to her nomination, Yamashita feared that her 640-page book would be a publishing failure.

“I almost couldn’t believe it,” she said. “I had this imagination of all these boxes of books stacked up in the warehouse just rotting and [my publisher] Coffee House going, ‘Why did we publish that novel? Such a mistake.’ Anybody who says, ‘Can you come out to talk about your book?’ — I’ll go. I wanted them to buy the book, so I was rushing to do anything, anything.”

This all changed when she was nominated for the National Book Award.

“I had this sense of hilarity and relief,” she said. “I just started laughing.”

“I Hotel,” a collection of 10 novellas, is a kaleidoscope of narrative prose, with three main characters in each that present different points of view from the International Hotel in San Francisco. The composition, which creates a multicultural landscape, extends from various political figures, union protests, health care, legal issues and graphic artwork, to Chinese opera and avant-garde jazz.

The book focuses on the Asian-American civil rights movement from 1968–1977.

With 10 years of research and over 150 sources, Yamashita said, it would have been unnatural to have only one narrative voice.

“[The book] is about a community of people and layers of communities all in concert doing something and being active because the period inspired it and required it,” Yamashita said. “Everyone was sort of feeding off of this energy.”

Historically, the I-Hotel on Kearney Street in San Francisco Chinatown was a low-cost residential hotel that housed Asian-Americans. In 1968, the hotel was targeted for demolition despite the movement for urban planning and redevelopment. Its occupants were told to evacuate, causing a wave of protest.

“I play a lot with the whole idea of Asian-Americans having bifurcated identities,” she said. “Are we American or are we Japanese? When is it that Americans are going to say, ‘You belong’?”

Yamashita was born Jan. 8, 1951 in Oakland and was raised in Los Angeles. Growing up in the ’60s and ’70s, Yamashita was influenced by some of history’s most tragic moments: the assassination of President John F. Kennedy, the killing of Martin Luther King Jr., shootings at Kent State, and the black civil rights movement, followed by the Asian-American civil rights movement.

“We were that generation who went to school and said, ‘Things have to change,’” she said.

Yamashita’s parents, who she calls “old democrats,” were both in Japanese-American internment camps during World War II.

“They had certain visions about losing their civil liberties and about justice,” Yamashita said. “The whole question of race and changing that perception was always a part of my family.”

Yamashita taught herself how to write while attending to her family and working. She described her nomination as a tremendous act of recognition, and said she is grateful to have developed so much as a writer.

“I knew I could write, but I didn’t know how to put together a novel,” she said. “I didn’t really understand what the requirements of writing were until I tried it myself.”

Yamashita’s writing reflects her passionate engagement with her past experiences and illustrates her thoughts not only as a writer but as a human being.

“Through fiction, you can create structures and storytelling in a way which reveals a true effect that can’t be obtained through a historical chronological rendering,” she said.

Through fiction, Yamashita parallels the issues of racism against Asian-Americans during the Vietnam War with the present-day discrimination against Arabs.

“We’ve gotten in that war with Iraq in the Middle East, and so we find the same kind of racialization and stigmas attached to Middle Eastern people … It’s this idea that they’re dangerous or evil,” she said. “All of that has happened again.”