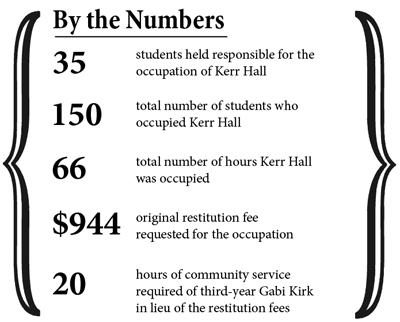 Some student participants in the November 2009 Kerr Hall occupation are seeing their nearly $1,000 requested restitution reduced to community service hours as the results of administrative hearings are released.

Those who opted not to accept the voluntary resolutions issued to them in April of last year were offered the opportunity to defend their cases to a campus administrator. Some of these hearings have resulted in the reduction or dismissal of findings of responsibility.

At a quarterly press conference in January, Chancellor George Blumenthal said he supports the decisions both to amend and to uphold the voluntary resolutions.

“Some of those hearings have been held, and … in some cases students have been offered the opportunity to do community service in lieu of paying a fine,” he said. “As far as I’m concerned, if that’s the result of the adjudication, then that’s fine. I simply wanted things to be fair, and I wanted there to be an understanding that certain behaviors do have consequences, not just for the institution but for the individuals who do that behavior.”

The voluntary resolutions were issued after 150 students occupied Kerr Hall to protest the UC Regents’ approval of a measure to raise student fees by 32.5 percent. The occupation lasted for 66 hours, causing damages that administrators said totaled up $34,992.02. Forty-five students received summons regarding the illegal occupation, and 35 students were eventually held responsible for the occupation. As part of their voluntary resolutions, these students were asked to pay $944 each to cover the cleanup for the damages to Kerr Hall.

As a result, over 100 UCSC faculty and lecturers signed a letter to Chancellor Blumenthal, and members of the American Civil Liberties Union sent a letter to the administration, both objecting to the university’s judicial process.

Since the original sanctions were issued, some of the 35 students received warnings, while others accepted their resolutions or appealed to the Student Judicial Board for a hearing.

Third-year Gabi Kirk recently received a letter from the administration explaining that the findings of responsibility and the sanctions and conditions of her own resolution have been modified. She is now required to do 20 hours of community service in lieu of the original $944 restitution.

Kirk said the modification of the resolution is a “political move” in light of the public attention the incident has received.

“They couldn’t definitively link the property damage to specific people so they’re no longer [requiring] the charge,” she said. “My question is, if they’re not holding anyone fiscally responsible and they said they need the money, where’s the money coming from?”

Director of public information Jim Burns said in an e-mail that UCSC will pay for the damages with “one-time central funds that could otherwise support such activities as instruction or student support.”

Student journalist Kenji Tomari was a writer for UCSC student newspaper The Project at the time of the occupation. Tomari was one of three student journalists present in Kerr Hall, along with representatives from TWANAS and City on a Hill Press.

Though Tomari met with Student Judicial Affairs director Doug Zuidema and explained that the extent of his involvement at Kerr Hall was limited to his role as a reporter, Tomari received a resolution, which included the $944 restitution.

Tomari said that he voluntarily passed up his opportunity to appeal Zuidema’s decision.

“I have said all I have to say regarding my situation as a student journalist inside Kerr Hall,” Tomari said in an e-mail.

He was told in June that associate vice chancellor Jean Marie Scott was reviewing his case and would get back to him in seven to 10 days.

“That was seven months ago,” he said.

In August of last year, Tomari’s lawyer contacted the university legal counsel and was told Scott was still reviewing his case.