Does the Fourth Amendment Protect You?

If you’ve ever watched the TV show “Cops,” you’re familiar with how this scene plays out. A suspect is found, arrested upon reasonable suspicion of a crime and taken away. This is standard procedure for criminals across the United States.

But what if the picture is much broader than that? What happens when the police need more evidence to convict you after arrest? In recent years, it’s become extremely easy to get that extra evidence, no further effort required.

Three years ago, a man was pulled over for being involved in an ecstasy drug deal in Ventura County. He was arrested and interviewed, and his personal belongings were taken from him, including his cell phone. The Ventura County Sheriff’s Department then proceeded to search through the phone and came upon an incriminating text message that officers showed to the man, causing him to admit his guilt in the drug deal.

The police claimed that this was not an invasion of privacy. But Gregory Diaz, under the defense that a warrantless search of his cell phone violated the Fourth Amendment of the Constitution, took his case to trial. This amendment says a person has the right to be guarded against unfair searches and seizures.

Appealing to higher courts did not do Diaz much good either. On Jan. 3, the Supreme Court of California upheld the lower court’s ruling, which means statewide police forces can continue to search cellular devices without a warrant. Diaz was convicted of selling a controlled substance and was sentenced to three years of probation.

Diaz’s case raises the long-debated question of what makes an acceptable balance between liberty and protection in the United States, and how this relates to new technology. The Patriot Act of 2001 was a prominent and controversial example of how an individual’s private life can intersect with the public sphere of the government, and now the issue of public versus private is finding its way not just into legislation but also to the judicial branch. With the increase in information younger generations put on the Internet and cell phones, the meaning of privacy itself may be redefined in coming years.

In her dissenting opinion of the case, Associate Justice Kathryn Werdegar said, “The potential impairment to privacy if arrestees’ mobile devices and handheld computers are treated like clothing, … fully searchable without probable cause or warrant, is … great.”

People v. Diaz is not the only well-known case that has dealt with governmental control versus privacy in an age of new technology. A recent case that set precedent for Diaz’s is United States v. Kyllo. It held that the use of thermal imaging to monitor movement inside a person’s home when the party under surveillance is in public view did not violate the Fourth Amendment, as it was not considered an unreasonable search. 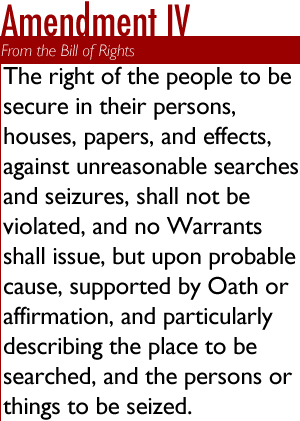 Additionally, the Patriot Act, enacted under former President George W. Bush, has continued to broaden the scope of protections under the Fourth Amendment through wiretapping and other, otherwise illegal activities during a state of emergency.

Steve Clark, captain of Santa Cruz Police Department, said that his force has been searching cell phones after arrest without warrant for “quite some time,” and that it is difficult for the department to track how many of those types of searches have happened since the case was upheld. He said, however, that the amount of cases was numerous.

“We have an interest in collecting all the relevant evidence and keeping it from being destroyed or somehow slipping through our fingers,” Clark said. “We find it particularly useful with drug dealing.”

Clark said that now relevant evidence is extended to cell phones. His department has found that cell phones include a large amount of information about crimes people commit, such as in text messages, photos and contacts.

“It helps us put together a better case and to find people who might be associated with illegal activities,” Clark said. “Especially when it involves some more major crimes.”

Linda Parisi, 30-year criminal defense attorney and professor at Lincoln Law School in Sacramento, said the court was concerned with what “containers” are subject to search.

“I would submit that a cell phone should be kept private and subject to the warrant requirement,” Parisi said in an e-mail.

Clark said that his department does not “push the envelope,” or consistently use warrantless evidence in the event of arrest, while adding that it has an interest in gathering all the information necessary to build good cases for victims of crime.

“We’re more interested in putting together cases that are solid, cases that are going to be credible in court,” he said. “We don’t want to have the reputation in court where they think we’re playing fast with the rules.”

Clark said that in some cases, the SCPD is able to conduct complete forensic examinations of cell phones to use as evidence without search warrants, which means using specialized software to recover data from that phone, including anything that has ever been deleted. They are then able to use that information as evidence.

“Once it’s digital, it never really goes away,” Clark said.

Generally, however, the police department will obtain a search warrant for that more intrusive search, he said, but it still leaves the door open for another department to take advantage of the forensic examination mechanism.

“For instance, [the police] say to you, ‘You don’t have anything in your pocket, do you? Because when I search you, I’m going to find it, so just tell me now,’ and kids are scared and confused and they don’t want to go to jail, so they pull out the roach or the joint, and then they’re in trouble,” Reinarman said. “Then they get busted for something like having marijuana in public view. The police have abused this privacy power up one side and down the other, particularly with regard to drugs.”

This is precisely the reason that some notable Santa Cruz residents are critical of warrantless searches. Mayor Ryan Coonerty expressed concern over the case and its implications for the future of Fourth Amendment privacy rights.

“I’m surprised by the [Diaz] ruling,” Coonerty said. “It would obviously help police investigations, but like anything it’s about balancing civil liberties with public safety. It’s a very difficult line to draw.”

Coonerty, who is also a politics lecturer at UCSC and licensed attorney, said that problems concerning emerging technology continue to be an issue. Although laws have been enacted to address issues of new technology, including false impersonation, identity theft and cyber-stalking, continual development widens the scope of problems that need to be tackled.

“When I teach my classes on civil liberties at the university, I always make the point that your rights to privacy are set by what is a reasonable expectation of privacy,” he said. “I think the younger generation is lowering that expectation of privacy with everything they’re putting online and their sharing of data.”

Student Union Association chair Tiffany Loftin said it is the individuals’ responsibility to filter their online personalities and be in charge of their own privacy especially on social networking websites, she said.

“Whatever you put on the Internet or Facebook or Twitter, you put it on there because you choose to do that,” Loftin said. “Is it lowering the expectation of privacy? I say no. It’s up to you.”

She related the situation to UCSC’s recent graffiti threat scare.

“If [the perpetrator had] put up their status as something silly like, ‘I did that, everybody on campus is stupid,’ we would know who did it and get them in trouble,” Loftin said, “and then classes wouldn’t have gotten cancelled.”

Police captain Clark said that the SCPD has dealt with similar incidents with some arrestees.

“We find a lot of very useful information that has helped us on occasion put together some very complex cases, including homicide,” he said.

“Everything I put up on Facebook is up there because I choose to put it up there,” Loftin said. “And if I don’t want people to see it, then it gets taken down.”

Head of the local American Civil Liberties Union chapter and former mayor Mike Rotkin said that police convenience should not come before privacy rights, for precisely this reason. He opposes further violation of the Fourth Amendment in the face of new technologies.

“I don’t buy it,” Rotkin said. “Is the Constitution inconvenient? Yeah, because you have to spend time, and you have to argue that there’s a valid state interest in something. It’s a pain in the butt.”

He said that it was absolutely necessary that there be a search warrant in Diaz’s case.

Linda Parisi said the court went “too far” in this case.

“The phone is not the person,” Parisi said. “And in today’s world, a cell phone is more like a diary or journal that contains personal information.”

Reinarman is hopeful that if appealed, the case will be found unconstitutional. Rotkin said that the police do have valid reasons for searching arrested persons for dangerous weapons or potentially harmful items, but he does not think cell phones come under this category and that he does not want this ruling to lead to further, more invasive rulings in the future.

Rotkin said the Fourth Amendment faces constant pressure, as under the Patriot Act, enacted in 2001. The act permitted warrantless searches through people’s computers and personal mail and let law enforcement listen in on private phone conversations.

“If it’s absolutely necessary that [the police] get evidence without a warrant,” Rotkin said, “I want to hear what the argument is. I don’t see any valid argument here other than convenience.”

Clark said that warrantless searches were only conducted in his department in cases in which it was obvious to the police that the suspect was guilty. He said that although his department does not, the current situation gives leeway for police to conduct searches only based on inconvenience.

Reinarman said he was disappointed that some Bush policies like the Patriot Act, which falls along the same lines of privacy infringement, have not been repealed by a new administration.

“I find it disturbing, because of the long history of constitutional protection against those sorts of things that were written into the very fabric of the legal blueprint for our country, the Bill of Rights,” he said. “It’s a further narrowing of the Fourth Amendment. The framers made the point to say that citizens have the right to be free of these sorts of unreasonable searches and seizures.”

Reinarman said it was “worrisome” that the highest court in the most populous state in the country has upheld that cell phones can be searched without a warrant in the event of an arrest because the state has no business knowing what movies you watch on your phone or what you just texted your girlfriend or boyfriend.

On the syllabus for one of his classes, Reinarman includes a particularly pertinent quote from William Douglas, former member of the Supreme Court.  Reinarman said the quote exemplified the idea that just one case can have the power to chisel away at the structure of privacy in the United States. He searched through the papers surrounding his desk and finally came upon the quote, reading it aloud:

“As nightfall does not come at once, neither does oppression. In both instances, there is a twilight when everything remains seemingly unchanged, and it is in such twilight that we must all be most aware of the change in the air, however slight, lest we become unwitting victims of the darkness.”