Reading into the Future 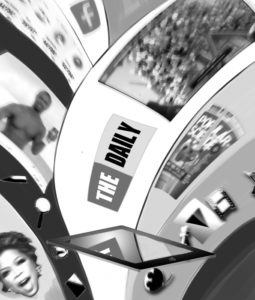 There’s an idea that with the rise of technology comes the death of journalism. And as a result, an uninformed and ignorant public. However, the different applications made for tablets show that journalism is not just staying alive but might be getting a whole lot more interactive. The features tablets lend to newspapers could have a positive impact, so long as quality reporting is a priority.

The Daily has been getting a lot of attention lately for being the first newspaper produced solely for tablets.

Here’s what the Daily does right: It uses links, videos, and graphics to enhance the reading experience, as well as provide more information. It also maintains its own staff of professional writers, meaning it isn’t just feeding off more legitimate sources to make a profit.

Speaking of profits, it charges readers 99 cents per issue. The method of each issue being “delivered” to tablets is far more seamless than that of news websites, which try to charge for reading certain stories but not others.

But it also has its fair share of problems. For starters, it is only available on iPads, the most expensive tablet on the market, which means it promotes the idea of news as an elitist commodity. And behind all the bells and whistles, the content is more lifestyle than news. There’s nothing inherently wrong with that, except that it brands itself as a newspaper.

The recent merger of AOL and Huffington Post, which coincided with the leaking of documents revealing that AOL placed website traffic far above quality reporting, shows that in the Web’s free-for-all environment, serious content is too often missing — even in supposedly serious news outlets.

But just because the Daily has drawbacks does not mean there is nothing to learn from it. The future of journalism is in new technology, and there’s no reason not to use all resources that are available to give readers the most information and insight. The ideal would be a tablet newspaper with the functionality and sleekness of the Daily and the investigative and intensive reporting of the New York Times. According to online user reviews, the NYT’s iPad app has problems with crashing and isn’t very intuitive or user-friendly, but hopefully it can work towards being improved.

Just because the physical newspaper might soon be a thing of the past doesn’t mean journalism will be, too. With the rise of newspaper apps, the future is looking a little brighter — and well-informed.