Santa Cruz Derby Girls enjoy a moment of down time on the bench. The SCDG is coming off its first win of the season, during which the team destroyed the Sin City Roller Girls last week in Las Vegas. Photos by Molly Solomon

Skating Their Way to Success 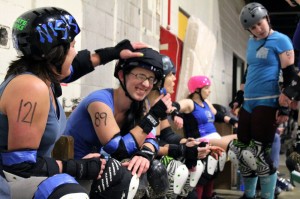 A flurry of color rushes past as women dressed in everything from shiny shorts to Hello Kitty socks skate around a rink marked with tape on the concrete floor. Tattoos peek out from shirts and wisps of crazy-colored hair escape from helmets as women of all ages warm up for practice. These are the Santa Cruz Derby Girls.

In just the last decade, roller derby has catapulted to popularity. In 2001, there was only one roller derby league in the country. However, over the past 10 years, that number has increased to over 400 leagues around the world, most of which are grappling for Women’s Flat Track Derby Association membership — or WFTDA. At the end of their last season, SCDG was granted this certification and is now competing in the Western region for the first time.

Liv N. Letdie, who is one of the jammers for the Boardwalkd Bombshells, said that receiving WFTDA status has provided a great amount of incentive for the derby girls.

“Having the certification has raised us from basically a ‘farm league’ to what is considered the NBA of roller derby,” she said. “Having the WFTDA membership is like putting a bigger carrot in front of us to work harder.”

Teammate Foxxee Firestorm said that having the WFTDA status also provides the league more notoriety which in turn increases support for roller derby in Santa Cruz.

The Santa Cruz roller derby league has expanded since its founding in 2007. Starting with just 25 women, the league has grown to around 100 roller derby girls in three teams: the Boardwalk Bombshells, the Harbor Hellcats and the Seabright Sirens. This three-tier approach portions off the women into teams appropriate for their ability, with the Bombshells as the “A” team, Hellcats as the “B” team, and Sirens as the “C” team. Although all teams within the league are sanctioned with WFTDA status, the Boardwalk Bombshells represents the league in most of the sanctioned bouts because of their status as the “A” team.

Despite having three teams, the roller derby girls are still a close-knit crew. The team’s cohesiveness can be attributed to the extracurricular work that the derby girls of Santa Cruz do. Every derby girls is on a committee that serves the league which ranges from spirit committee to public relations. At each home bout, they choose a non-profit organization to receive a portion of their proceeds.

Derby girl Cleopatra Catastrophe is co-director of the SCDG.

“Everyone is a cog in the machine that is roller derby here in Santa Cruz,” she said.

Since its founding, SCDG has donated over $10,000 and more than 550 hours of volunteer work to community groups, schools and non-profit organizations. The team is currently awaiting approval from the IRS to receive non-profit status.

Although roller derby takes a considerable amount of time and commitment, the women participating are more than happy to commit.

“There is no reason I would volunteer this much time away from my kids and family if it wasn’t important,” said derby girl Foxxee Firestorm.

Although the derby girls are serious about their community outreach, they also engage in the quirky party spirit of roller derby. Derby girls are known for their eccentric outfits and personalities.

Liv N. Letdie watched as a woman with purple-streaked hair and tattoos skated by.

“The booty shorts and fishnets might bring people to the bouts,” Letdie said, “but once they actually see roller derby, they’re addicted.”