Santa Cruzans protested in front of Bank of America on Monday, declaring that corporations should pay taxes to the government like individuals do.

Around 40 people protested outside the Bank of America on River Street and later moved the protest to the downtown clock tower. Santa Cruz’s local chapter of MoveOn.org — a family of political organizations that sponsor campaigns for federal issues like the Iraq War, as well as presidential campaigns — sponsored the event.

Organizers picked Bank of America because of the bank’s previous bailout of $1 trillion, according to a list entitled “Guide to Corporate Freeloaders” by Sen. Bernie Sanders (D-Vt).

“If the corporations just paid their fair share, all of the states’ debts would be accounted for,” Arnold said.

In “Guide to Corporate Freeloaders,” Sanders listed corporations that do not pay taxes to the federal government but received a federal bailout or large IRS refunds. The list includes Goldman Sachs, Bank of America and Exxon Mobil, among others.

The number of corporations that do not pay taxes prompted MoveOn.org organizer Sara Bassler to help coordinate the rally outside the Bank of America.

Bassler and other MoveOn.org organizers manned the megaphones, took down names and passed out signs for those who turned out. Arnold said the Santa Cruz Bank of America protest was part of a campaign in 450 cities nationally to fight the budget’s tax exemption of major corporations.

Protesters passed out signs bearing slogans like, “Close your B of A account,” and “Fat Cats are stealing our future.” Many were heard shouting, “Cut from the top, not from Mom and Pop,” and “1, 2, 3, 4 — pay your taxes like the poor.” 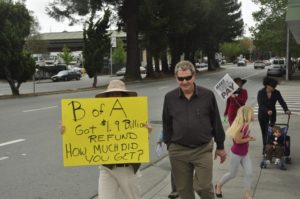 Protesters centered most of the blame for the national budget crisis on congressional Republicans. This includes Sen. Paul Ryan (R-Wis.), who proposed the new budget that passed after much deliberation and hesitation by Congress — deliberations that almost led to a full government shutdown.

“The Republicans say the country is going broke and they’re making cuts to the bottom,” Bassler said. “We’re broke, yet they give huge tax breaks to companies that can really help out our financial crisis.”

Bassler feels that the money the U.S. government is not collecting from corporations like Bank of America can be put to better use in American social programs.

“Politicians need to wake up,” Bassler said. “We need to work together to help keep our society what it is now, and help the less fortunate and build libraries.”

To illustrate the impacts of budget cuts on national programs in comparison to those of corporate tax breaks, a child spoke at the rally about how she would be affected by the cuts.

“I want to stop the budget cuts so that teachers can come back to work and kids can learn,” said Julia Knight, a student of Montclair Elementary School in Oakland and a “MoveOn granddaughter,” according to her grandmother.

Santa Cruz political organizations like Organizing for Santa Cruz, the community organizing arm of the Democratic Party in Santa Cruz, turned out at the event. While the rally was pronounced a success by many protesters, some organizers, like Arnold and Bassler, said they were disappointed with the lack of UC Santa Cruz students in the crowd. They said the fight for more funds to be appropriated to basic services is relevant to all students, including students in higher education and their budget needs.

Bassler and Arnold want UCSC to be represented in protests rallying for corporations to pay their taxes, or to host the next rally on campus.

“We need a sister rally at the university,” Arnold said. “There are 450 of these [rallies] happening in American cities and it’d be great to have one at the Bay Tree Bookstore.”