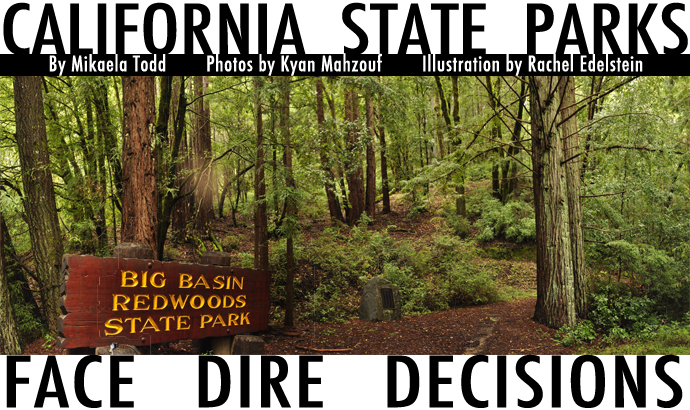 Phone calls, emails and protests were the name of the game.

This was the reaction locally and nationwide when Gov. Arnold Schwarzenegger proposed shutting down all 14 state parks in Santa Cruz County and upwards of 220 of the 278 existing state parks in California. Locals of Santa Cruz and those affected across the state mounted a massive campaign to save state parks and won. Instead of following through with his proposed plan, however, the former governor cut hours and maintenance at state parks to appease his public.

Fast-forward to 2011, where the victory of two years ago is overshadowed by the ever-growing deficit in California. Gov. Jerry Brown’s budget, released in January of this year, reflects his need to spend less in order to shore up the entire state of California’s economy. What this means for the California State Park System is a cut of $22 million over the next two years — an 18 percent cutback of the overall general fund for state parks. The system expects closures of some parks at least, a huge loss for the advocates of 2009.

This funding crisis was not made any easier when last year, Proposition 21, which would have attached an $18 fee to all license registrations to be used to balance the budget for California’s state parks, failed to pass in the November 2010 elections. That money would have replaced the entire state’s budget allocated to the state park system, which could have been used elsewhere in the governor’s proposed budget, according to Roy Stearns, deputy director of communications for California state parks.

With the proposed cut taken into account, the state park system will have lost a total of 37 percent of its general fund since the 2007–2008 fiscal year budget. This has amounted to a staggering loss for the single largest destination in California — the state park system — which has a total of 75 million visitors yearly, almost outdoing Disneyland’s location in California 5-1.

Local non-profit Friends of Santa Cruz State Parks was at the forefront of the fight against Governor Schwarzenegger’s 2009 budget proposal. Executive director Bonny Hawley said now her organization tries to help fund local parks the state can no longer pay for.

“We’ve had to really try to fill in where we can,” Hawley said.

Even with help from Friends of Santa Cruz State Parks, which, according to their website, has provided $10 million in funding to Santa Cruz educational programs, visitors centers and exhibits over the past 30 years, some Santa Cruz state parks still have trouble staying open. Hawley’s office is located next door to the Santa Cruz Mission State Historic Park, which only remains open on Thursdays, Fridays and Saturdays from 10 a.m. to 4 p.m. They used to be open full-time.

Restrooms have also been partially closed in most of the local state parks and seasonal campgrounds remain closed for months longer than usual. Public accessibility has been cut dramatically, according to Hawley.

“The park used to be open a lot more to the public,” Hawley said.

Stearns said, Proposition 21 “would have fixed everything.”

But according to Hawley, there was a deeper issue that affected the vote.

“I think it had a lot more to do with trust in government,” Hawley said. “I think there were people who really didn’t believe that the money would go to state parks, that somehow the governor or the legislature would find a way to put the money into the general fund for other purposes, even though it was very well drafted and that wouldn’t have happened. I think people were suspicious, and the tough economy didn’t help.”

With the looming threat of closures, UC Santa Cruz environmental studies lecturer Brian Dowd-Uribe said his class, Environmental Interpretation, would be critically affected. Almost half of his students currently intern at state parks.

“Without these internships it would be hard for my class to succeed,” Dowd-Uribe said in an email. “The internship allows students to immediately put into practice concepts explored in the class. There just wouldn’t be enough internships elsewhere to make up this gap.”

To decide which state parks are going to close due to the governor’s budget, a team of the California State Park System’s experienced supervisors and managers have put together a comprehensive plan that is currently being reviewed by

According to Stearns, deputy director of communications for California state parks, this team of supervisors and managers traveled to Sacramento earlier this year and spent weeks refining the methodology behind the proposed budget cuts.

“You have to balance so that what you leave open still serves the greatest number in the public,” Stearns said. “Not an easy choice.”

Stearns said that “a significant number” of parks would close if the proposed budget is not adjusted, which he is skeptical about since tax extensions did not make it onto this June’s ballot.

The team of supervisors and managers looked at the cost savings they had to make, and ran the numbers on how much a park makes in revenue, or how much the system saves by closing it. Other factors the team considered were specific state parks’ significance, visitation, existing partnerships and infrastructure. The information regarding which parks will close cannot be disclosed until the plan is released to the public in mid-May.

Dave Keck, landscape architect and project manager for the Big Basin General Plan, a long-term plan that is currently being drafted for Big Basin State Park, said that with the budget cuts and the wounded state of the park system, his team is trying to look at how they can obtain other funding through partnerships. He said he wanted “methods that we can achieve objectives for keeping parks open and still accommodating visitors.”

On March 26, Keck helped facilitate a meeting in which members of the public were open to comment on several different plan proposals.

Instead of looking to the state for funding, Keck said that a lot of the funding Big Basin receives comes from bonds, which have funded improvements and updates for the park, its headquarters and its visitor’s center. Hopefully, Keck said, future bond partnerships will help implement the current General Plan. Peninsula Open Space Trust (POST) and Sempervirens Fund are two of the park’s current bond partners, which helped secure the territory of Little Basin acquired early this year.

What this means for Big Basin is their facilities have not been hit as hard as those that have difficulty securing funding through private bonds. Campers and rangers at Big Basin see little difference in the way the park has been run in the past.

Securing funding is exactly what the Big Basin General Plan does in effect, Keck said.

“[The Big Basin General Plan] is used as a tool to solicit funds, if anything, by others who have an interest in making the park better,” Keck said.

Realistically, Keck said, funding from either the state or private bonds and partnerships may not ever be available, but “when and if” it is, the General Plan also provides a framework for where to apply that money.

“I’ve worked on plans 30 years ago that still have things in them that have never been implemented,” Keck said. “This is not a master plan for development. Think of it more as a 20-year plan. It projects that far ahead.”

Keck expects that the draft of the General Plan will be finished by the end of the year, and open for public comment. By this time next year, Keck projects the plan will go to the State Park Commission for approval.

“We’re trying to make improvements where we can, and reinforce the protection and preservation of the more significant natural and cultural resources, and things like the wilderness experience,” Keck said.

But Keck said this doesn’t come without anxiety from the public, who are concerned about the impact generating more activity will have on certain state park areas.

Development is a major threat to state parks in their current fund-deprived state, according to Sen. Lois Wolk (D-Davis).

It is the main reason why Sen.Wolk drafted SB580, a bill currently making its way through the Senate that would protect state parks from unwanted development.

Sen. Wolk said there is no clear, existing policy regarding development in and of California State Parks. SB580 is the “commonsense protection” that state parks need, according to the SB580 Fact Sheet, authored by Sen. Wolk and Sen. Christine Kehoe (D-San Diego).

Some of the major development threats in California include a proposed toll-road through San Onofre State Beach, a power-line through Anza-Borrego Desert State Park, and the building of a mega-dairy in Colonel Allensworth State Historic Park.

A similar Senate bill was passed in 2009 called SB679, also authored by Wolk, but was vetoed by Gov. Schwarzenegger when it reached his desk. Supervisor Mark Stone of the Santa Cruz County Board of Supervisors said he hopes the reformed bill will pass this time.

The Santa Cruz Board of Supervisors, at the urging of supervisor Neal Coonerty, endorsed SB580 on April 5. Supervisor Stone of the fifth district, which includes Ben Lomond, Scotts Valley and parts of Boulder Creek, said endorsing the bill was a “no-brainer” for the board, and that the proposal moved straight to a vote with no discussion.

In a press release, supervisor Coonerty said, “SB580 ensures that our parks have a high bar for their protection … and these places belong to every resident of the state.”

Supervisor Stone said the concern is developers will prey on parks that have closed due to the budget cuts, and that generating revenue might become more important than preservation if the budget crisis gets worse.

“What we’re concerned about is that notion may come up and there might be pressure to just sell [the parks] to get some revenue, or allow developers to get in there and do things that we would later regret,” Stone said. “It’s to avoid temptation. If we can’t come back to them when times are better, that will be a real tragedy.”

Stone said he thinks the bill will hold on to the “status-quo” of park and that “developing state parks, which are meant to be natural” would be something the state park system would regret, and expressly the type of thing the bill would safeguard against.

Andy Schiffrin, analyst for supervisor Coonerty, said in an email, “As California continues to develop, preserving some of our natural assets both for their environmental values as well as for the enjoyment of our citizens, is of critical importance.”

But for Schiffrin, funding of the state parks and whether some will remain open or be closed is not the reason that SB580 is important.

“Certainly money is an important issue,” Schiffrin said. “However, some projects would be proposed in state parks irrespective of the financial realities.”

Hawley of Friends of Santa Cruz State Parks said that SB580 would be advanced regardless of the budget.

“[Regarding funding], I think [the bill] would still be important because as populations increase and development pressures increase, it’s important that there is that kind of protection in place for state parks,” Hawley said.

Dowd-Uribe said he also hopes state parks are protected because of the learning opportunities that state parks provide to students.

“Literally hundreds of K–12 classes visit state parks over the course of the year in Santa Cruz County alone,” Dowd-Uribe said. “These visits are often … the only chance students get to directly learn about the environment. State parks play a key role in the environmental education of our youth. Park closures would end these critically important programs.”