The petite girl clad in tight-fitting black is the same height as the dumpster she’s climbing into. Luckily, half the dumpster’s lid is already lifted back, so she doesn’t have to worry about drawing attention with the clatter of swinging back the heavy hatch top.

With both hands expertly placed along the dumpster’s rim, she lowers herself into the abyss of the five-foot-tall metal receptacle. She emerges with a backpack full of loaves of bread. She raises herself out the same way she climbed in — with a jump. The dumpster dive is a success.

With limited budgets, students are forced to satisfy their stomachs with alternative methods to the routine trip to the grocery store. Starving students aren’t just a myth. For many students at UC Santa Cruz and colleges across the country, struggling with hunger is a day-to-day reality.

“It’s like survival of the fittest,” Lopez said. “But instead of having good traits to survive, if you have money, you can survive.”

In addition, those who can’t afford to eat healthily may face long- and short-term physical impediments. According to the Skidmore College website, poor nutrition can cause people to feel lethargic and depressed and can lead to diabetes, cardiovascular disease, hypertension, osteoporosis and iron deficiency anemia in the future.

Food and housing are accounted for in the Undergraduate Student Cost of Attendance/Standard Budget every year, according to UCSC’s Financial Aid and Scholarship Office.

In comparison, Lopez spends around $790 on food and housing per month. Rent is $490 a month, and he budgets for about $50 worth of food a week. But sometimes he breaks his budget.

“I end up spending more just because I get hungrier than I thought I would,” Lopez said.

UCSC financial aid director Ann Draper said in her experience, students do not usually seek advice from the financial aid office about affording food. More often, she said, students say they struggle with finding a job.

While financial aid covers Lopez’s tuition, he’s financially independent and pays for rent and food when he has the money.

He cuts costs and minimizes his bills by opting not to own a phone or car.

Lopez earns cash by selling cans and small used technological devices he finds. His trusty tool is Craigslist, where he sells the items and finds temporary jobs performing unskilled labor. 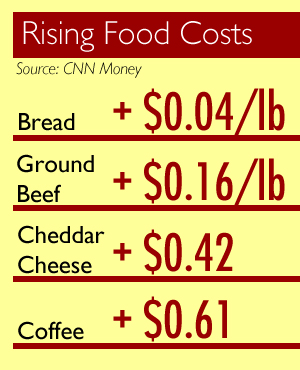 Over a span of five to seven hours on campus, Lopez gathers about $10 worth of cans, which fills two huge trash bags. After exchanging them for money, he can eat.

“From there, I usually go to Burger King or Taco Bell or McDonald’s, because those are the cheapest places,” Lopez said. “I usually get the value meal. I’ll get that three times a day, breakfast, lunch and dinner, if need be.”

Lopez said he realizes fast food is not the most nutritious or cost-efficient way to eat, so he cooks when he has the provisions.

“What I’ve been doing recently is stealing groceries from Trader Joe’s,” he said. “I’m hoping [the food will] last me a little over a week because I got mostly ingredients … I can make more things, instead of eat one thing and then it’ll be gone. Knowing how to cook for yourself really cuts down on the amount of money you spend on food.”

Lopez said stealing isn’t his first choice, but he resorts to it when free food providers are not easily accessible.

“You have to steal because you need food at certain times of the day, and the free options aren’t always available,” Lopez said. “There are only certain times of day the church can give you things.”

Lopez’s food supplier of choice is the Salvation Army on Laurel Street.

For seven years, the Salvation Army’s Food Pantry has provided free bread and pastries Monday through Friday. Once a month, families and individuals are allowed one bag of non-perishable items like canned tuna and macaroni and cheese.

“Nothing is left by the end of the day,” said Denise Acosta, social services director for the Laurel Street Salvation Army.

She noticed students come and go with the school year.

“We do have a lot of students, but no more than homeless people,” Acosta said.

On campus, Lopez utilizes the dining halls even though he doesn’t have a meal plan. He stands outside and asks students going in if they can guest-swipe him in.

Occasionally Lopez will try to get swiped himself by pretending to have a meal plan.

“It’s easier when it’s a student [swiping you in],” Lopez said.

Scott Berlin, director of Dining and Hospitality Services at UCSC, said the dining halls try to control the number of students sneaking in.

“Someone’s going to pay for that eventually,” Berlin said. “For us, that someone is someone on a meal plan.”

Berlin said dining halls cannot donate leftover food because, according to health laws, it’s illegal to reuse food that sits out and is self-served. 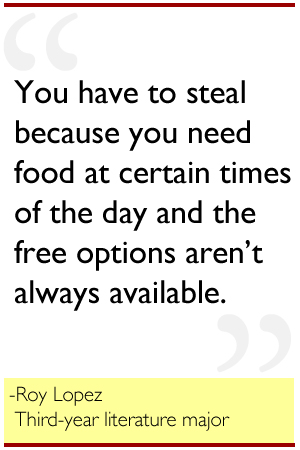 In any case, the dining halls do not have any leftovers to give away.

“We’re very efficient, and that helps keep the meal plans at a lower cost because we don’t waste,” Berlin said.

Third-year transfer Shiree Rezendes said she also struggles to get enough to eat. She, too, resorts to asking random students for guest swipes into the dining halls.

“I hate it. I do feel like a beggar then,” said Rezendes, a full-time student who holds two jobs, as a yoga instructor and a server at a restaurant.

Lopez and Rezendes both said they eventually get swiped in.

Besides food, Rezendes also has to pay for car insurance, bike maintenance and leisure activities with no financial assistance. She currently lives with someone who owns a trailer, but is in the process of looking for a place to live.

“I’ve been independent since I moved to Santa Cruz,” Rezendes said. “My grandma gives me money when she can. I’m going to be asking her for a loan for this quarter’s tuition.”

Since she works 20–25 hours a week combined from her two paid jobs, she is a possible candidate for California’s food stamp program, recently renamed CalFresh.

According to the magazine Washington Monthly, 1,500 college students are receiving food stamps in Sacramento County, where two years ago only 700 were.

“While CalFresh is [food stamp’s] new name, the program has existed for 40 years and helps single people, seniors, students and families with little or no income to buy food,” according to a CalFresh statement provided by Debora Friedman, CalFresh outreach for the County of Santa Cruz Human Services Department.

Third-year Pearl Cruz* started using food stamps when she qualified for the program six months into her pregnancy with her now three year-old daughter.

“I had no money,” Cruz said. “I remember going for a week on peanut butter and jelly sandwiches … I obviously needed help.”

According to the California Food Policy Advocates, 28,871 people are eligible for food stamps in Santa Cruz County, but 65 percent don’t receive them.

“Now it’s like a credit card,” Cruz said. “The only people who’ll know [it’s a CalFresh card] are the people on food stamps themselves. Otherwise, people think it’s a debit card.”

Cruz remembers using food stamps with her stepmom when they were more like coupons that were ripped out of a booklet and stamped.

According to a CalFresh fact sheet, college students are eligible for CalFresh if they work more than 20 hours per week, are approved for state or federally funded work study, are responsible for a child under six years old, or are a full-time enrolled single parent and responsible for a child under 12 years old. They also must be between the ages of 18–49 and enrolled half- or full-time.

Friedman said financial aid does not disqualify a student from receiving the program’s services.

“You could be on a federal or state work-study program as a part of your financial aid and that could make you qualify,” Friedman said. “We work with the financial aid offices at both UCSC and Cabrillo to make sure they make those referrals for students, even [those] on financial aid.”

However, Cruz and her family are running into problems. Her husband attends Cabrillo College and is not on work-study because the college does not offer it. As a result, he does not qualify for food stamps under this guideline.

“They told me the only way he’d qualify for food stamps is if he’s on work-study,” Cruz said. “If you don’t have work-study, you’re screwed.”

Now Cruz, who is employed through work-study, supports her daughter and husband and has another child on the way.

FSH hosts a Second Harvest Food Bank food pantry that provides free food to the community. Every first and third Wednesday of the month, the food pantry, located in FSH, provides produce, protein, bread, cereals and other food to those who show up.

Before the doors open at 4 p.m., a line already trails along the side of the small FSH Affiliates building and sprawls out to the parking lot. The crowd of about 40 is made up of pierced young adults, babies in strollers and elderly men and women dressed for the weather in rain jackets.

“Some are in line for 45 minutes,” said Conne Lester, assistant director of Family Services.

According to Lester, at this Westside location every distribution serves an average of 80 people.

Cruz said the food the pantry provides can be challenging to cook with.

“Not that I’m ungrateful, but a lot of the time there are things you can’t make meals out of,” Cruz said.

Although the food pantry provides items like fruit, onions and carrots, Cruz wishes they had more meat. 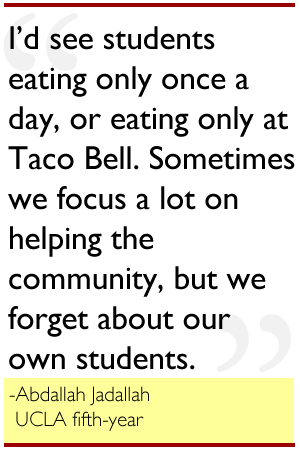 “It’s harder for the kids,” Cruz said. “They don’t want to eat only rice and beans or potatoes.”

Lester, who was a single mother in FSH herself at one time, said the food pantry does not advertise, and families and individuals know about the distribution by word of mouth.

“They’re kind of referred to us from various groups that know when they’re the most needy,” Lester said.

The food pantry primarily serves students in FSH, and Lester said they do not have the resources to accommodate many more people.

“We’re kind of at capacity at this point, so it would be difficult for us to take many more new people on,” she said. “Just in terms of the food that we pay … compared to if we bought it somewhere else. Also in terms in size of the space, we’re running out of room.”

The food pantry relies on FSH residential assistants, staff and some volunteers from the community to help set up and distribute the food.

Other universities recognize and cater to the issue of food inaccessibility among students. UCLA has a Food Closet that offers donated food and toiletries to students at no cost.

“I’d see students eating only once a day or eating only at Taco Bell,” Jadallah said. “Sometimes we focus a lot on helping the community, but we forget about our own students.”

Because of networking and media attention, the Food Closet gets lots of canned goods, donations from hotels and even some catered food.

Jadallah said the students who frequent the Food Closet are not only getting fed, but are eating healthier too.

Even though there are organizations and resources on and off college campuses that support students’ food accessibility, food security is still an issue.

Cruz is currently running out of food stamps for the month, and has to space out the food she does have. She has to wait five more days to get the next month’s food stamps.

“It’s hard,” Cruz said. “Do we put gas in the car? Do we have to borrow money from someone? You don’t know how much you’re actually going to be spending until it happens.”

*Name has been changed