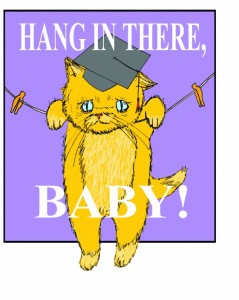 As I write this, I’m just three weeks shy of my college graduation. My inevitable existential crisis, having started sometime in April, has been in a state of flux for weeks now — am I excited, nervous, nostalgic or just over it? One thing, though, is certain. For the remaining days of my collegiate career (and for as long as I can hold on thereafter), I am putting up a mental blockade.

I have erected these walls to keep out a specific, but very insidious, enemy: the onslaught of New York Times op-eds, Huffington Post blogs and USA Today or CNN polls saying that I, a soon-to-be college graduate, am doomed. Doomed to a new life of mediocre Craigslist job postings, minimum wage work and a humiliating drive home from college with a Volvo full of the same stuff I drove north with four years ago.

According to a source that I am not particularly fond of right now — a consulting firm called Twentysomething Inc. — 85 percent of this year’s college graduates will move back in with their parents due to a sub-par job market. By this measure, it seems like I should forget about hearing the traditional “Pomp and Circumstance” tune on graduation weekend and expect something a little more depressing as I walk down the aisle. Perhaps Radiohead or Jeff Buckley would be more appropriate. At least that’s what I feel I’m supposed to believe.

My purposeful rejection of this media-induced malaise isn’t a state of denial, but rather a declaration of independence. I’m distancing myself from the idea that I am a member of this supposed “lost generation.” The one who checked all the boxes to get into college (SAT tutoring, athletics, volunteering), fulfilled all the requirements once they arrived (general ed, choosing a minor, writing a thesis), and yet has emerged on the other side empty-handed.

The problem, to me, is that this view of college as an assembly line — where you take classes, build your resume and reach June with a job offer and an engraved invitation to middle-class life — is entirely outdated. What about the part where you find out what you’re passionate about doing? Where you decide not just what you want to see change in the world, but also figure out a way to make it happen. That kind of thing, it would seem, is limited to freshman year idealism.

In my time at UC Santa Cruz, I have met countless individuals who are indeed qualified enough to be hired by any number of companies, agencies or firms. But more importantly, I have met people whose ingenuity, passions, unique talents and problem-solving skills make them qualified for a number of jobs that don’t exist right now, because the class of 2011 has yet to create them.

Now, I am fully aware that in six months to a year, I may be proved utterly wrong with a healthy serving of humble pie. It’s exceedingly obvious that things out there are tough. I have spent the past five months interning alongside college graduates who, let’s face it, are ready to move from the intern cubicle to the payroll. But those same people are also building a skill set and developing a passion for something that is more than just a paycheck. It may take us all a while to get to where we’re going, but when we do, I’m confident what we will find will be less of a career and more of a calling.

In addition, moving in with one’s parents, while not ideal, is also not the end of the world. It may mean you’re not making enough money to rent an apartment, but it doesn’t mean you’re an utter failure. Did you miss that minor event in 2008 when all those wealthy investment bankers and Wall Street executives — who no doubt had a great job the day they graduated from their Ivy League establishment — crashed and burned and took the whole world down with them? The whole idea of an income bracket as the ultimate barometer of success is on shaky ground these days.

While money is certainly not insignificant when it comes to our post-collegiate success, it’s just not the bottom line. Irritatingly, the aforementioned New York Times and Huffington Post articles’ familiar story of graduates being forced to move home seems to end there. Nowhere does it say what these individuals are doing. Public service and non-profit jobs are on the rise, applications for programs like Americorps and Peace Corps have increased, and laptop-fueled entrepreneurship can be observed in many a coffee shop. I’ll give you one guess as to who is doing that meaningful, albeit less lucrative, work. And it’s not those investment bankers.

So while my pre-graduation status may mean I’m not be entirely qualified to give it, here is my advice to the class of 2011: Boeing, Goldman Sachs and Aetna are probably not going to call you, but that’s not necessarily a setback. If there’s one thing we’ve all learned in college, it’s that this world has plenty of problems, many of which were caused by the former generation. Don’t let the fact that you might have to live with your parents take away your resolve to fix those things, to pursue your passion and to stake out a meaningful life that resembles the one you’ve always wanted.