The Santa Cruz Police Department patrols downtown as people dressed in costumes walk along Pacific Avenue on Halloween night. There was a large police presence to enforce laws, including increased fines in what the SCPD declared a “triple fine zone.” Photos by Morgan Grana. 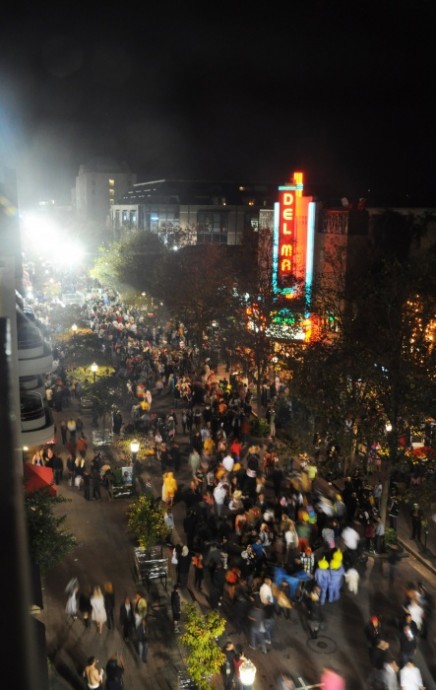 Fifty total arrests were made in downtown Santa Cruz on Halloween night, and 49 triple fine municipal code violations were given. Of the arrests, 34 were for public intoxication or otherwise alcohol-related.

To discourage public disruption during the unofficial Pacific Avenue Halloween parade, the Santa Cruz Police Department announced on Oct. 26 the downtown area had been deemed a safety enhancement zone for designated Municipal Code violations. The fine for possession of an open alcohol container was $480, and a ticket for urinating in public $576.

“The focus is on ensuring a safe event,” said SCPD spokesman Zach Friend. “Over the last few years we’ve averaged 25,000 people downtown in the late evening, approximately half of the city population in one square mile. Historically we’ve had acts of gang violence and a number of alcohol-fueled incidents, from fights to vandalism to DUIs. We want to find a balance for people coming downtown where they can have a good time but respect the law.”

The SCPD teamed with nine allied law enforcement agencies on Oct. 31 to enforce local laws and identify and contact suspected gang members downtown during the evening.

A Nov. 1 press release from the SCPD reported approximately 15,000 people came to downtown Santa Cruz on Halloween, “what has become the largest single informal gathering in the city.”

Santa Cruzan Brandy De Vincentz saw a group of “kids” stopped by police officers downtown that night. The officers confiscated a bottle from the group, and asked them to line up against the wall and produce their IDs.

“It wasn’t scary, just funny,” she said. “I thought they were dumb. I hope they weren’t arrested, because that would be too harsh.”

The SCPD begins preparing for Halloween up to six months in advance.

“The number one thing is moderation of alcohol — so many bad decisions are made when intoxicated that reducing the amount you drink on Halloween greatly improves safety on that night,” Friend said.

Downtown Association director Chip said ensuring safety during the parade is important, as the evening is significant to Santa Cruzans “on a more global level.”

“For many young vampires, princesses and firefighters, Halloween provides some of their first memories of downtown,” he said. “Dressing up as whoever you want to be, walking around and seeing all kinds of amazing people and creatures and having people give you candy all afternoon makes for a good impression. The trick is managing the crowd as the costumes get more grown up and the streets get more crowded … Generally the city has done a good job of managing it. The fines are pretty steep, so people know that they can come down and have fun, but you’ve got to behave.”

The SCPD also responded to a significant number of party-related calls that evening, according to Friend. The department reports fielding 347 calls for service during the evening, a 75 percent increase over last year’s call volume.

“Overwhelmingly these calls, especially later in the evening, were for parties and issues (such as fights) stemming from the parties,” according to the Nov. 1 release.

The SCPD and the UCSC Police Department scheduled a round of party patrols for Friday and Saturday nights preceding Halloween.

The focus of these patrols was “large and out-of-control parties in Westside Santa Cruz neighborhoods,” according to UCSC Public Affairs.

Previous party patrols performed by the Santa Cruz and UCSC police between September and October resulted in more than 60 citations, nine arrests, and 32 party hosts warned with their addresses flagged under the city’s “loud and unruly” ordinance.

For the past three academic years, UCSC has provided money to the Santa Cruz Police Department to fund voluntary overtime for officers on the weekends to enforcement of the city’s “loud and unruly” ordinance and to respond to large parties, according to UCSC Public Affairs. Executive Vice Chancellor Alison Galloway approved a campus expenditure of $25,000 for the 2011-12 academic year to continue the partnership program with the city.