Tucked away in the highlands of Guatemala, rural San Pedro La Laguna is severely impacted by poverty. But students like Elizabeth Herrera will now have the chance to make a positive difference within the community through an internship with“Ayudame A Pintar Mi Futuro” (APMF), which means “Help Me Paint My Future.”

Through her field study, Herrera advocated for increased student involvement.

“My cause is education,” she said. “It doesn’t matter if it’s here in Santa Cruz or abroad. It’s about you wanting to make a change.”

Miranda Pope, a sponsor of APMF, said that although interning with the project is fairly new, APMF is seeking to inspire a range of students through quarter-long internships or volunteering opportunities.

Interns would be tutoring children in their English classes, helping with arts and crafts, and more. There is also the possibility for UCSC students to have a home stay, where they can live with the children’s families and assist them with local activities.

At the moment, there is no program or class at UCSC that is affiliated with APMF, but students can become involved by doing an independent study for credit with their department’s approval.

During a recent visit to UCSC, APMF cofounder Jose Mendez showed slides of children interacting with art and explained how APMF has been able to alleviate poverty in his community.

“The problem with [Guatemalans] is we do not have a voice in the government or a voice of the children. Who will listen?” Mendez, who only spoke Spanish, said. “The one thing we can do now is do what we are doing here today [raise awareness].”

Not only does APMF teach children to draw and paint, it teaches their families to learn along with them. Many mothers of participating children are illiterate and only speak the native Mayan language, Tz’utujil. However, through working with APMF, families can increase their knowledge of spoken Spanish.

Mendez began APMF with his brother, Henry Mendez, by opening a small art gallery in 2008. When two curious children came into the gallery, Mendez asked the boys if they would like to paint. The oldest showed an interest in painting, but could not afford supplies. 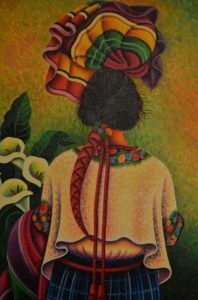 Eventually more children with similar stories began to show an interest in APMF. Mendez felt compelled to do something.

“Little by little I realized that when someone is interested in their community or in the problems of a village or nation, you come to terms with the necessities of people,” Mendez said.

Mendez said that the Guatemalan government has not taken initiative to make a difference or educate the nation’s youth, which is a grave problem in Guatemala. It brings into light a much larger issue into context that affects the lives of not just Guatemalans, but addresses poverty and its causes.

“It is a real honor to have a teacher and artist, who is able to highlight the issues of his country,” said UCSC student and Chicano Latino Resource Center intern Gemma Givens.

Mendez left Santa Cruz elated — even though many of his paintings were not sold, he was extremely happy with the community response.