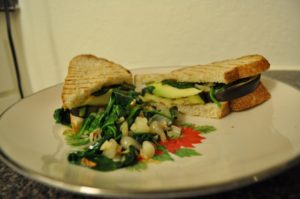 It’s been a surprisingly short six months away from Santa Cruz, City on a Hill Press, and everything else I left behind when I took an internship in Washington D.C. and then went on to study abroad in Ireland. Returning didn’t herald much excitement compared to my colorful months away. But the kitchen still holds that old familiarity that I missed, and keeps me up to date with my life-long love affair with food. That along with the fact that I have not been cooking properly for a long time just makes my stomach tingle with excitement, and then later bloat.

I was experimenting with living out of California, feeling the rush of an inter-city internship and then the equally terrifying rush of learning a school system in a different country. I experimented with lifestyle choices, some pretty gross Irish-vegetarian cuisine — that thank goodness did not include the blood sausage my friends ate on several occasions — and plenty of beer. Oh my gosh so much beer. But at least it was vegetarian, as my overly zealous nighttime drinking crew often reminded me.

So, obviously, an experimental dinner was in order. I didn’t look at any of the 100+ recipes that I had saved to my laptop since last summer, though I have been waiting for a chance to try them. Instead I searched my brain, which I should say is supplemented with quite an extensive knowledge of food, all learned from the Food Network. With that I came up with something I might not have otherwise made. But I was so glad I did. 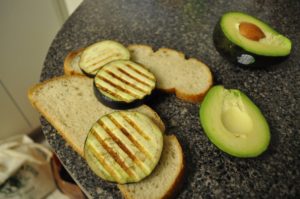 It was a Panini with an assortment of vegetables that somehow came together: avocado, eggplant, spinach, garlic and shallot, as well as a heavy heaping of vegan butter-spread. I put the eggplant on the Panini-maker first to cook it through, and then fried the spinach with the shallot, garlic and vegan spread. I layered the avocado and eggplant onto the bread, and then topped it with the cooked spinach and threw it back onto the Panini-maker. There was even some cooked spinach left over to use as a side.

The results sent tingles down my spine. I’m convinced that humans do not have a sufficient vocabulary to put into writing the feeling you get when eating caramelized shallot. Besides the taste though, this 100 percent vegan meal is completely healthy for you. Goodness knows I need a healthy diet after three months of drinking beer for dinner. (I did STUDY abroad by the way.)

Spinach is a huge power food, as well as eggplant, so using those two ingredients together with the soft, lush avocado creates a combination of flavors your taste buds will rejoice at, and your body will thank you for later. That is especially true if you are lacking iron or Vitamin A, which are supplemented by the spinach, or fiber, which is supplemented by the eggplant at almost no expense to your calorie-count. 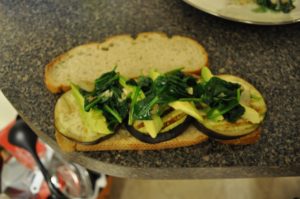 But these are definitely not the only foods you should be on the look out for at the nearest farmers market or grocery store. It’s also a great idea to buy in-season vegetables and use them as an excuse to learn how to properly cook them. That’s one way to greatly expand your cooking skills, and believe me, winter vegetables are nothing to be scoffed at. And as always, this is a great way to get to know where your food comes from and who grows it.

So, go experiment! Try the Santa Cruz farmers market this week and buy something completely out of your comfort zone, or simply walk into a grocery store without a menu planned. You won’t be disappointed, and you’ll probably surprise yourself!

Farmer’s Markets are Wednesdays downtown (the corner of Lincoln and Cedar streets) and Saturdays on the Westside (2801 Mission St.)

Grill the eggplant slices for two minutes, then lay on sourdough bread with avocado slices. Fry the shallot, garlic-clove and vegan buttery-spread until shallot is translucent, then add in a quarter of the bag of spinach. When cooked thoroughly, remove from heat and add a layer of spinach on top of the avocado slices. Put the sandwich in a Panini-maker for two minutes until golden brown. Serve with extra cooked spinach as a side.