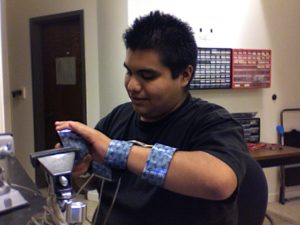 Technology is continuing to change the way humans live and interact with each other on a daily basis. UC Santa Cruz alumna Rupa Dhillon has contributed to this change in a way few others have done before with a video game for both blind and sighted gamers.

Dhillon designed “Rock Vibe,” accessible both to the sighted and to the blind. Dhillon came up with the idea when she noticed a “Rock Band” controller while brainstorming for her thesis in a human-computer interactions course, part of her master’s program at UCSC.

“To play the game, you put on a wearable device that contains four or five vibrating motors,” Dhillon said. “Each motor would represent a color band you would respond to if you were playing Rock Band. So if you felt a vibration on the far left side of the device you would know that you would need to press the far left button on the guitar controller or keyboard.”

Research for the game was published by the Association for Computing and Machinery after Dhillon presented the game at their national conference.

“‘Rock Vibe’ is a much bigger scheme,” Kurniawan said. “We are looking to modify mainstream games that interact with both sighted and blind people.”

Kurniawan’s research is in games for health and healthy living, including assistive technology for people with disabilities and people with low social economic and educational backgrounds.

“There are quite a number of games that can be played by people who are blind,” Kurniawan said. “However, there are fewer games that a blind person and a sighted person could play together.”

Traditional board games like chess and Battleship allow sighted and visually impaired players to interact together, she said. 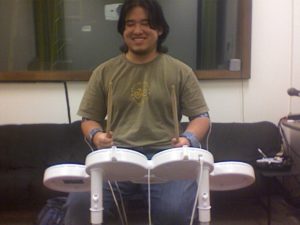 While there are options, Dhillon said they are limited and not attractive to the average player.

“Most games are really simple — they don’t do much, and aren’t very fun,” Dhillon said. “There are many games available for both sighted and blind people, but again, they’re too simplistic to be taken into the mainstream.”

While the game has only been played by game testers, Dhillon is hoping to give access to the community through centers for the blind and visually impaired.

Sharon Hudson has been working as an associate director and teacher at the Vista Center for the Blind and Visually Impaired for 28 years. Hudson said current technology hasn’t been as inclusive of the blind community as it can be.

“Things like the iPhone and computers have been great in general, but they continue to make them more visual,” Hudson said. “They’re producing more devices with icons and touch screens … things that aren’t accessible to the visually impaired.

Hudson said “Rock Vibe” could be something her students will enjoy.

“I know a lot of our students are interested in music, so anything that would make them connect with others would be great,” she said. 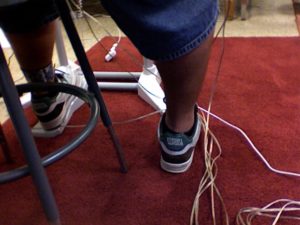 “Rock Vibe” is hoping to receive most of its funding from the online pledge website, Kickstarter. Kickstarter opens a pledge system for projects to raise funds and sets a goal the project must reach in order to receive any of the pledge funds. Dhillon has until Feb. 25 to raise $16,500 or the project won’t receive any funds. As of Feb. 1, over $12,000 has been pledged toward the project. The Kickstarter project can be found here.

“It is possible to create games that can reach a wide range of people, regardless of their capabilities,” Dhillon said. “It is possible to bring people together, no matter their differences. And I hope that ‘Rock Vibe’ can show people that.”