Someone made it possible for you to fling a hapless bird across the thumbprint-smudged screen of your smartphone. I say “you” because, statistically, you probably play video games. You exist in two-thirds of American households. You’re probably male (60 percent chance), but you’re less likely to be so than in the past. Age-wise, 25 percent of you are under 18, 49 percent of you are between the ages of 18 and 49, and 26 percent of you are over 50. That’s a shift that’s happened over the last decade — no longer should the term “gamer” conjure up images of 17-year-old boys racking up kill streaks in “Call of Duty.” As a matter of fact, if so many people play games, is “gamer” even a relevant term anymore? The audience for gaming has never been more diverse, and game creators are getting more creative in response.

We as a society have moved past the point of considering video games and their creation as the sole province of the unclean, asocial masses. Those masses have become more sophisticated and taken on the role of purveyors of modern culture. They’ve got their Sundance-esque credibility, and their do-it-yourself ethics are as convincing as any from past decades.

They’re also here at UC Santa Cruz. Silicon Valley is already a constant pull on UCSC graduates with a technical bent, but with the gaming industry bringing in $66 billion in sales in 2010, it’s a field that more and more are going into.

Jane Pinckard is the associate director of the Center for Games and Playable Media (CGPM). Founded in 2010, the CGPM is a relatively recent addition to the computer game design major at UCSC, which was founded in 2006 as the first in the UC system.The CGPM was established to house and facilitate research in the field of video game design. Jane credits the major’s formation to one person.

“Five years ago, computer science enrollment was falling across the country,” Pinckard said. “[Chair of computer science] Jim Whitehead went out and recruited top faculty [for the new major]. It was Jim’s vision, and he brought the A-team together.”

Pinckard said she didn’t have access to anything nearly as organized as the CGPM to facilitate her interest in video games and gaming culture in the late ’90s.

“I started writing about games and game culture in 1997, and I was really interested in thinking about games as cultural products and as being embedded in culture,” Pinckard said. “At the time, there weren’t many other publications doing that.”

Based on Pinckard’s experience, things clearly change. Nowadays, gaming sites and review forums are about as natural as mediocre food blogs. Pinckard sees this as an inevitable evolution of the industry.

“It’ll happen naturally as game-literate generations grow up,” Pinckard said. “It’s a natural sophistication and maturation of the medium.”

Graduate student Teale Fristoe also said that barriers to entry into the field are dropping in more ways than one.

“Ten years ago, the only way to get your product in front of somebody was to go through a publisher and get your game in a box on a shelf. If you wanted to be in the industry, you had to be a cog in a giant machine,” Fristoe said. “These days there are flash portals, the App Store, Steam; all these different venues where you can just put up a game.”

Fristoe sees this as a huge shift in terms of manpower and individual creative capacity.

“Two-, three-, even one-person teams can put their work online now,” Teale said, a look of enthusiasm stealing across his face. “You can create something small and beautiful and release it to the world. Maybe not everybody will enjoy it, but anybody can.”

Pinckard said it’s easier than ever for a few people to realize their game design desires.

“It used to be that you couldn’t start a game studio with just you and your friend,” Pinckard said, smiling widely. “But now you can. It’s like indie film.”

Comparing video game creation to the explosive growth of the independent film movement might not be far off the mark; like independent film, the industry draws in all types. Devon Wyland, a senior in the computer game design major, came from a background in graphic design, and had no plans to immerse herself in video game design. But one thing inevitably led to another.

“Santa Cruz didn’t have a graphic design major, but the more I got through the game design major, the more I loved it,” Wyland said. “What’s nice about video games is that you can merge any interests you have. It’s a really open field to go into.”

The major is growing beyond the classes it offers, as interest increases. The support network that has formed outside of the classes speaks to the enthusiasm of the participants.

“Because of the interest in game design, we have a game developer club. Up to 60 people show up sometimes to talk about, test and make games,” Wyland said. “We have a lot of support behind game design, so even if the classes aren’t there yet, I can see it coming in the future.”

This network lies at the heart of what makes game design popular at UCSC. Fristoe sees the game developers’ club as an essential component to the sense of community fostered within and outside of the major.

“The game developers’ club is the focal point of the game developer community outside of the classes. It brings together people who are interested in making games, and we get to have weekly meetings,” said Fristoe, who emphasized the necessity of a strong community in the game design process. “Play-testing is a very important thing. If you actually want a game that others can enjoy, you really have to work hard to make it understandable and clear.”

Undergraduate Zachary Lindblad is in the middle of his senior project — computer game design majors put together a fully functional video game during their senior year as part of a team. Even as an undergraduate, Lindblad is engaged with the future of game design.

“On the design end, it’s all about the youth of the medium,” Lindblad said. “In games, so little has been done, so much is being done, and it’s all moving in a thousand different directions.”

Much like Pinckard, Lindblad sees the current state of game design as mirroring revolutionary moments in other forms of media, like film.

“We’re not just talking better graphics, better production values. We’re talking entire realms of human experience opening up just within the last few years,” Lindblad said. “Many people have said being a game designer today is like being a filmmaker at the birth of sound in movies, but comparing the ability of one person to realize a game the entire world can play together to the addition of sound [to movies] does not do it justice.” 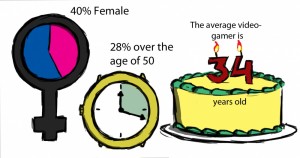 But like Wyland, Lindblad acknowledges the place other forms of media have had in influencing his work. This is especially true for his current project titled “Hello World,” a game about exploration — a summary that hardly does it justice — that Lindblad has wanted to make since he was in high school.

“‘Hello World’ was directly influenced by ‘2001: A Space Odyssey,’” said Lindblad, referring to the revered Stanley Kubrick film. “Being a designer and not having your biggest influence be outside your medium leads to stagnation in ideas.”

Chelsea Howe is a former employee of Zynga, the social network game developer responsible for “Farmville.” She now works at Social Chocolate alongside Jane McGonigal, author of “Reality Is Broken: Why Games Make Us Better and How They Can Change the World.” Social Chocolate is a video game studio dedicated to creating “disruptive and deeply enriching social experiences,” according to their ethereally styled website, which features a beta of their current project on its front page.

“Games are possibly the most powerful medium that exists. So why aren’t people asking, ‘What does this game mean?,’” asked Howe in a lecture given on Feb. 8 at Jack Baskin Engineering, in a room appropriately named “The Simularium.”

Howe said that the medium of game design has vast potential to evoke emotions in players.

“There’s no reason why games can’t start a revolution,” Howe said. “I wanted to make games that made people laugh and cry. How do we make people feel something?”

“People interacting with our systems aren’t just bullet points,” Howe said. “If you design for generic players, you’re going to get generic games. People aren’t just what they want. People care about things. Games can be about that.”

Howe said the use of ambiguity is a narrative tool for game designers — sometimes it helps to let people fill in the blanks themselves when you’re trying to evoke strong emotions.

“People don’t like ambiguity,” Howe said. “If we can’t solve it, we’ll make up reasons for it. Players project themselves into the spaces we leave open.”

Howe said video games possess a unique capacity for engagement that other forms of media don’t have, but that that capacity has yet to be fully explored.

“Can our systems tell stories the way art and music can? Can interactivity provide the same thing? Can we evoke emotion purely through interactivity in games?” Howe asked. “Every time you feel an emotion, it spreads to six other people you know. Feel better. Mean better. Make better games.” 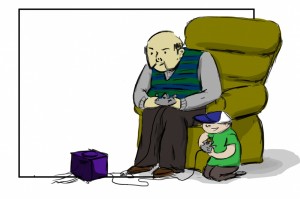 Jamin Warren used to write for the Wall Street Journal, but left his position there to start up a gaming culture website called Kill Screen. He did this because he felt there was a void in the video game industry.

“As someone in my 20s interested in design, art and music, there was little writing on games that appealed to those interests,” Warren said. “[Essayist] Chuck Klosterman wrote that video game criticism can’t get started because it lacks the voices to explain it in a meaningful and relevant way. We’re hopingto fix that.”

Warren said the lack of dialogue about the cultural significance of games is a result of their meteoric rise in popularity.

“The big issue with games is that their commercial success has risen faster than their cultural relevance,” Warren said.

Warren sees games as intensely personal objects that offer clues about the people who play them.

“What I love about games is that they’re reflections of who we really are,” Warren said. “I spent a long time as a reporter at the Wall Street Journal, trying to get subjects to open up about their lives. But with games, we play as the people we truly are, and I love what that allows us to discuss afterwards.”