Students Take Journey into the Lives on the Border 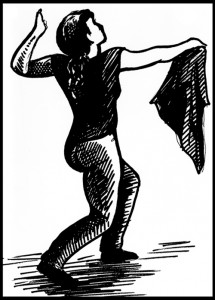 Standing under the spotlight, de la Riva performed her one-woman show, “One Journey,” in front of a live audience of students and staff at the Stevenson Event Center on Feb. 10. Throughout the performance, Riva spoke and sang, laughed and cried, danced and acted, and told stories of her own experiences and the experiences of others she has met along the way.

The play was influenced by real-life stories de la Riva collected during interviews with people from the Juarez, Mexico and El Paso, Texas borderline region.

“I’m originally from a border town — El Paso, Texas [and] Juarez, Mexico,” she said. “I wanted to find a play that represented my community.”

Juarez, Mexico has been repeatedly included in the top 10 and top 50 lists of most dangerous cities in the world, according to the Mercer Quality of Living Survey.

In the first month of the new year, the city has already witnessed 200 deaths — about seven a day, according to a National Public Radio study conducted in 2011. Last year’s death toll surpassed 3,000.

Most of these deaths were connected to drug-related violence among opposing mafia groups.

While living in El Paso, de la Riva was able to see Juarez from her high school.

“The fact is there is a war on our border,” she said. “We always think of war as overseas, like Iraq and Israel. We always imagine it as being so far away, but there’s one actually going on right on our land, on our border, with our consent, with our funds. All these people are dying, some from our own nation … [We don’t know] what will it be like in the future, how much trauma will come from 10,000 people being killed in one city alone since 2006.”

One audience member said de la Riva’s performance brought attention to kidnappings and murders of women in the borderline region.

“It’s a struggle for not only Mexicans but for all of us,” said the audience member, who wished to remain nameless. “Those women don’t get any peace, [but] what do they have to do with the drug exchange? And being El Salvadorian, non-Mexicans, we can [still] relate to the pain they feel. I think anyone can.”

The stories shared in “One Journey” reflect circumstances affecting the lives of people who may not even know they are being impacted.

“People who are so far from the border always ask, ‘What does that have to do with me?’” de la Riva said. “The thing is the border has begun this whole militarization process that can possibly expand. Juarez is a model for the future of border control, a laboratory for the future, and we can’t allow this kind of effect to happen across our borders.”

The lights dimmed, the audience applauded, and de la Riva stood before the room to deliver her closing words.

“Becoming aware is the most important way to get involved,” she said, “so people can understand the issue to be influenced by it. Everyone’s going to have a different approach — whether artistic, organizational or more political. And that’s the beauty of it. We all have our own way of expressing ourselves and the struggle we pertain to.”