Green Economy and Innovation: A Brief Q&A with Author and Activist Van Jones

City on a Hill Press had the opportunity to speak one-on-one with Van Jones before his campus address Feb. 21. Jones touched on topics ranging from green jobs to entrepreneurship and activism. 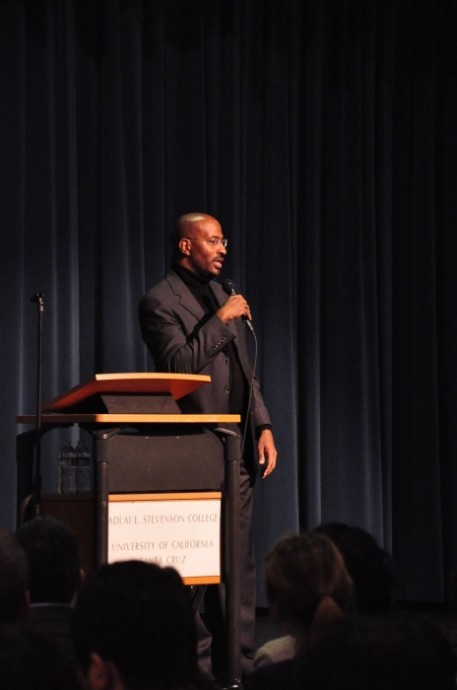 City on a Hill Press: How feasible do you think it is for green jobs to stay in the United States? Are green jobs enough to make up for endemic losses?

Van Jones: You won’t be able to offset all of the losses in the manufacturing sector, but you can offset some. We never propose green jobs as the answer to every economic problem in the US. We don’t think it’s enough, but we don’t think you can get there without the green manufacturing component.

CHP: Do you have suggestions or tangible ideas of how to bridge the class gap in the environmentalist movement?

Van Jones: We have to look for those environmental solutions that also address poverty. In other words, an environmental movement that can fight pollution and poverty at the same time will get a huge following. For example, community gardening and farmers markets are ways for people to get healthy food who can’t afford to go to Whole Foods and those are things we should be focused on. Maybe not everyone can afford to put a solar panel on their house, but we can fight to make sure that public school buildings, our community centers, those places in our neighbors…where we have opportunities, are being solarized. And that the jobs that are being created to solarize low income communities are going to low income people. Those kinds of fights tend to put those conversations in a different place.

CHP: Do you think it’s important that legislation is enacted to insure that those kind of programs are targeted in the right communities?

CHP: Do you see environmentalism as self-determination for communities of color?

CHP: Because one of the problems with off-shoring work is fewer labor regulations, do you think environmentalism has to be a global tide as opposed to something that has to be targeted immediately in the US?

Van Jones: We have to start where we are. It’s very hard to get other countries to do things – it’s hard to get our own country to do things. Sometimes I think people will say, ‘If China won’t do it, we won’t do it.’ And I think that’s the wrong way to look at it because, 25 percent of the green house gases are from the US. … Some huge amount of the existing carbon in the air is just for our little 5 percent of the world. We just have to do the right thing and move in a cleaner and greener direction. The business community always screams and yells about regulation whenever America tries and makes them clean up their practices. And as soon as those laws are past, they out perform even their own expectations of meeting them. It’s because once you pass a law, regulating green house gas emissions for example, and everybody has to deal with it, they start competing – who can do it faster, who can be more efficient?

CHP: A lot of students of color are feeling disenfranchised and a lot of students are going to be leaving university and entering into the work force. What would you say to those students about how to address this changing economy?

Van Jones: I think that on a shared basis, on a collective basis, one of the most important things I think needs to be done is not only that President Obama needs to be reelected, but that he gets reelected based on a mandate on your generation’s needs … I don’t think we should give up on or abandon making DC act right. Closer to home, I do think we’re going to have to become much entrepreneurial … There use to be fantasy you’d get out of school, you’d ride your credit card onto a big McMansion in the suburbs and you’d buy a big screen TV and you’d be happy forever. I think that version of the American Dream is dead. I think that we’re going to have to actually help each other – gifting, bartering, sharing as a part of the strategy to make up for the shortfall of the formal economy. We have to be a nation of neighbors … The big picture: this generation could have a huge impact on the election. If you say, ‘Look, this is ridiculous. We’re the first generation of Americans being thrown under the bus economically, and there’s still no jobs program in place for my generation, there’s still no loan forgiveness program for my generation.’ If you raise hell about that, I think the political system will start to respond.

City on a Hill Press’ coverage of Van Jones’ address at UC Santa Cruz on Feb. 21