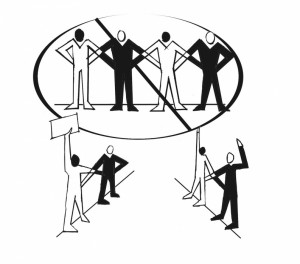 Say the word aloud to fellow UCSC students and faculty, and in all likelihood you’ll elicit a fair number of groans and sighs. That’s because for many people on campus, the notion of a strike doesn’t conjure up positive associations of free speech and solidarity, but blocked campus entrances and transportation nightmares.

While the purpose of the strike — to protest cuts to higher education and pursuant tuition increases in accordance with a nationwide day of action — is a worthwhile one, the method organizers plan to use to carry it out may not be the most effective.

These sentiments have been echoed by several administrators and faculty members, including David Smith, an associate professor of physics at UCSC. In a recent letter to City on a Hill Press, Smith said that while he wholeheartedly supports efforts to reverse the damaging cuts and fee hikes to the UC system, he does not believe in a “hard strike” that would block off campus.

“That it’s only one day doesn’t matter. What should matter is that we are members of a community built on mutual respect,” Smith said. “For one member to look another in the eye and say, ‘I have decided that you will not pass’ is an act of unspeakable arrogance and disregard of that person’s basic rights to freedom of movement, action and speech.”

By preventing people from going to class, strikers are imposing their method of protest on their fellow students and faculty, creating an opposition between those who favor blocking campus and those who don’t. It also antagonizes those who are trying to get to class by presupposing that they’re unsupportive of the cause, creating a paradox in which students are discouraged from going to the classes they are paying an increasingly high amount for and are encouraged to force others to do the same.

However, students and faculty who are not in favor of blocking off campus should not use their disapproval as an excuse for ignorance. Those who cannot or do not want to participate in the March 1 protest should attend  Occupy the Capitol, which will take place on March 5 in Sacramento. Students and higher education supporters from across the state will converge on the state capitol for a march, rally and general assembly.

As cliché as the adage “strength in numbers” is, it is undoubtedly relevant for this situation. A large group of people marching on the capitol would serve as a vocal and symbolic presence to show politicians that there is still a great deal of enthusiasm for improving the quality of higher education. For those who can’t physically attend, an awareness of the protests, their causes and related higher education news or legislature is just as important. Ignorance of a situation that’s directly impacting you, whether it’s intentional or not, only leads to widespread apathy, and that in turn can lead to more action that’s damaging to the UC and CSU infrastructure.

Strike organizers and others who want to make their voices heard about cuts to their education should try to find a more viable, respectful way of doing so. Otherwise, they risk alienating themselves from the very peers and professors who are so vital to the cause.