Breaking with Tradition — On and Off the Court 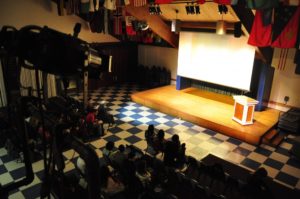 Getting that last shot to win the game for your team is one of the many challenges a basketball player faces. Through hoops and dreams, the life of Emily Tay is no typical underdog story. She faces the challenges of her culture, living the American dream, and expressing her sexuality.

The documentary “No Look Pass,” screened on campus on Feb. 22. follows the life of Emily Tay, a first-generation Burmese immigrant and full-time psychology student at Harvard University, who strives to balance her career with college basketball.

The film shows that after graduating from Harvard, Tay’s dream of playing professional basketball in Germany came true, and unravelled a new journey as well as a relationship with a woman.

Melissa Johnson, the film’s writer, director and producer, was inspired by a previous film she was working on that payed homage to her friend and coach, Kathy Delaney-Smith.

Johnson, like Tay, was part of Harvard’s women’s basketball team. In 2008, Johnson began interviewing players for her documentary and came across Tay. She described it as a moment that changed her life.

“My camera guy asked me what kind of footage I wanted and I said, ‘Just get some of the players in the gym shooting some hoops,’” Johnson said. “At that moment he told me, ‘Well, I can tell you the camera loves that girl. She’s got something special.’”

In interviewing Tay for her documentary, Johnson instantly felt a strong connection with Tay and realized there was more to her life than met the eye. Soon after, Tay agreed to film with Johnson and “No Look Pass” began production. The project took four years to complete.

“I really wanted to move people and connect them to one another, even if you were not Burmese or an athlete,” Johnson said. “As hard as this film was, I know I was born to make something like this. If I could at least help and inspire one person, that would be great.”

“No Look Pass” tells a story that affects not just students, but individuals who have endured the internal conflicts of coming out to family and loved ones and the expectations of one’s culture.

The film was co-sponsored by the Asian American and Pacific Islander Resource Center (AAPIRC) at UC Santa Cruz. The AAPIRC aimed to promote the event as an open space for all individuals to come and receive support.

“One of our main goals in screening the film is to break stereotypes of what is ‘normal’ and raising awareness of AAPIRC. We want to create a welcoming environment,” said Theresa Tsai, program coordinator for AAPIRC. “These are the venues that support all students.”

Third-year literature major Tom Chek said experiences in “No Look Pass” are comparable to how minority students can feel excluded at UCSC.

“The film spoke to me,” Chek said. “It captured what it felt like to be the ‘other.’ I particularly admired the sacrifices Tay’s family made for her to go to school. It really impacted me. I could relate in how my family, too, has made sacrifices for me to be here at UCSC.”

Tay may have faced adversity at times, but the passions she ignites on and off the court will continue to pave the path toward self-empowerment for herself and others.