The march against foreclosure occupies the streets of Santa Cruz. Photos by Auralee Walmer.

Around 200 students, activists, concerned homeowners and members of the Occupy movement gathered March 11 to take part in a march protesting foreclosure fraud in Santa Cruz. Starting at the county courthouse and ending at the post office, the marchers stopped at Bank of America, Chase and Wells Fargo to listen to the stories of homeowners who had been foreclosed on by those banks, and to demand an end to the lending practices that led to the foreclosures.

Of the many issues discussed, difficulties in getting loan modifications and the allegedly illegal transferring of titles between banks were the main two topics addressed by the speakers at the banks.

“Out of the many people who were supposed to be helped by these [loan modification programs], only a small percentage have been — maybe one out of five,” said Mark Reed, who is currently facing foreclosure on his Watsonville home by Bank of America, as he addressed the crowd outside of that same bank. “Still, I love the property I live on and it doesn’t bother me a bit if I’m underwater. It’s my home and I want to keep it.”

Another speaker from Watsonville described the delays he experienced in trying to work out a deal with Chase on his mortgage and, speaking through a translator, gave his opinion of the situation.

“As two or three people become richer, the rest of us suffer,” he said.

After listening to the speakers, the marchers placed “notices of foreclosure” on banks, as well as large “For Sale” signs on their lawns. They also circulated a petition asking Santa Cruz County Sheriff Phil Wowak to postpone evictions until the county has determined whether or not a given foreclosure is fraudulent, and called for the county’s aid in actively fighting fraudulent foreclosure.

With some dressed as Robin Hood and the Monopoly Man, and others singing and carrying signs with slogans such as “War Mongers and Fat Cats Are Stealing Our Future” and “Another World is Possible,” the march was hard to miss as it passed through downtown. The Occupy Santa Cruz Foreclosures Working Group (FWG) planned the march, and many other groups ended up participating, including Occupy Monterey, the Watsonville Brown Berets, and the Women’s International League for Peace and Freedom.

Although the marchers did briefly block traffic as they crossed streets along their route, most of the drivers honking were also flashing peace signs and giving them the thumbs-up.

The FWG had planned the march as a way to raise awareness of foreclosure issues, and as a way to recapture the community support that they felt had been at a low ebb since the occupation and subsequent arrests that occurred at an empty bank on River and Water Street in November. UC Santa Cruz student Jacqueline Seydel thought that occupation, which was the action of an autonomous group, gave some people the wrong impression of Occupy Santa Cruz. 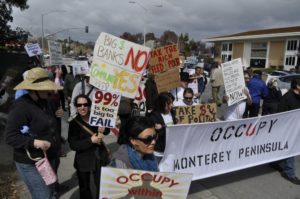 “After the River Street action, we were like, ‘What is the hard-hitting one-liner that can encompass most of the community? What do we all have? What hits us all?’” Seydel said. “Housing. Mortgages. And there was a group of about four of us who were like, ‘Hey, we need to do something really positive to get this support back in the community and to get people talking.’”

Those who took part in the march all had slightly different reasons for being there, but most had experienced foreclosure firsthand or knew others who had.

“There are way too many guys out there that have been in the mud and shared blood, that are homeless now, that have nothing left, and it’s just so horrible, its bad,” said Anthony Messer, a former U.S. Army sergeant who was stationed in Baghdad and Kabul during the five years he spent in the military from 2004-09. Messer is now an avid activist and Occupier, so when he heard about the march, he thought it only natural he should attend.

“For me, a few years ago my family lost their home in foreclosure and we still believe it was done crooked the by U.S. bank,” said Christopher Seerden, also an ardent Occupier and a participant in the March 5 rally in Sacramento, as well as the Occupy the Senate event in October. “So coming out here and learning what I can from everyone else, and sharing what my family went through, and being able to help others in that situation — that’s awesome.”

Spirits among the protesters were high after the march as they gathered for a general assembly on the steps of the post office, and most thought that they had accomplished what they had set out to do.

“The purpose of this march was really to make a peaceful, nondestructive, nonviolent demonstration, and we successfully did that,” Seydel said. “So, yeah, I’m very pleased with how it all turned out, and we’re only bound to grow from here.”