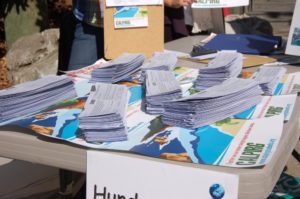 The lone plastic bag floating across the freeway. Plastic bags lying in the bushes next to bus stops, plastic bags carried from restaurants, grocery stores and malls — where do they all go? According to Save Our Shores (SOS), a nonprofit marine conservation organization based in Santa Cruz, they are not thoughtfully discarded. According to their website, “Single use disposable bags plague our waterways, oceans and natural environments, causing immeasurable harm to marine species and communities worldwide.”On March 7, the California Public Interest Research Group (CALPIRG), a “consumer group that stands up to powerful interests,” petitioned in Quarry Plaza on the UC Santa Cruz campus for signatures supporting a city ordinance to ban plastic bags in the city of Santa Cruz. Santa Cruz County already has a plastic bag ban that goes into full effect on March 20, but the county is only responsible for unincorporated land, while the city has its own jurisdictions.SOS took part in the campaign to ban plastic bags in Santa Cruz County and has fought for a plastic bag ban in Monterey County. The city of Monterey’s plastic bag ban goes into effect June 6.

“We use 12 billion plastic bags every year in California,” said Kelsey Grimsley, oceans campaign coordinator and UCSC CALPIRG chapter chair. “Because only 5 percent are recycled, plastic bags are a significant part of plastic pollution in our ocean.”

Oceanographer and chemist Charles Moore’s 2008 study on the effect that plastic has on the ocean, found of all litter in the ocean, approximately 60–80 percent is plastic, with an even higher percentage in certain areas. In his study, Moore said plastic bags are not the only source of plastic waste in the ocean, and banning plastic bags will not be sufficient — all plastics people litter should be regulated.

CALPIRG hopes to gain momentum and expand their efforts to ban plastic bags statewide. Many cities like San Francisco, San Jose and the unincorporated Los Angeles County have already banned plastic bags. According to the Mercury News, San Jose’s ban on plastic bags is similar to the Santa Cruz county ban, in which no one, except restaurants and nonprofits, can use single-use plastic bags. They currently charge 10 cents for paper bags. Although a bill to ban plastic bags was defeated in the California State Senate in 2010, there are new measures that are being planned for the future. Currently, there is a recycling bill, AB 298, being pushed through the California State Assembly.

“The plastic bag ban is not very popular at the state level,” said Lauren Dockendorf, advocacy coordinator for Save Our Shores. “AB 298 is more of a plastic bag recycling measure — it doesn’t go straight to the ban. Although we would like to see a ban in the future, we always advocate for conservation efforts like that.”

The Save the Plastic Bag Coalition, a group that has a large financial backing according to SOS, has continually battled against plastic bag bans across the state.

“We were working with Santa Cruz County for two and half years to pass the ban on plastic bags,” Dockendorf said. “It took a long time to get through because the Save the Plastic Bag Coalition and the California Restaurant Association threatened to sue the county unless they took out the part of the ban that said restaurants had to refrain from using plastic bags.”

Santa Cruz County restaurants are not beholden to the ban, even though the ban excludes restaurants. However, many other of Santa Cruz’s restaurants have made the effort to become more eco-friendly. Most notably, Woodstock’s Pizza has pledged their support of banning plastic bags, along with Betty’s Burgers, Upper Crust and Café Cruz.

“We’re trying to be as green as possible and help out our community,” said Brendan Duggan, assistant general manager and marketing representative from Woodstock’s. “We’ve already stopped ordering plastic bags.”

Safeway has also stepped up to the challenge of cutting down plastic usage. Starting on March 20, the day that the Santa Cruz County ban on plastic bags starts, they will give away 100 reusable bags a day for a week.

“We hope to cause a domino effect and really get these cities rolling,” Dockendorf said. “We are ready to fight.”