The men's volleyball competes against Hope International at there last home game on March 9. The team won their last home game and are now preparing for the rest of the season. Photo by Morgan Grana.

In the middle of their sweep of Hope International, the UC Santa Cruz men’s volleyball team was hitting the ball hard enough that it could be heard outside the West Field House and in the neighboring dorms. With every deafening shot, the 230 attending students erupted, adding to the noise of ball hitting hardwood. These fans had reason to cheer: The Banana Slugs are now the best Division III men’s volleyball team in the nation.“It’s great to get the recognition we deserve,” senior libero Darren Tsai said. “It’s a great stepping stone for where we want to be.”The Slugs (9-4) have been on a tear since prevailing over Fontbonne University and taking the Continental Volleyball Conference (CVC) Tournament in St Louis by storm one weekend ago. In tournament play, they defeated Fontbonne, Milwaukee School of Engineering (MSOE), Mount St. Joseph’s and previously top-ranked Carthage on their way to victory. In their streak, the Slugs have lost one of out of 13 sets played.The game against Hope International was the team’s fifth sweep in seven games played since Feb. 17.UCSC volleyball coach Todd Hollenbeck was pleased with the win but is looking ahead to the MSOE CVC Tournament. The Slugs will have to defeat four teams in two days to get a second round bye for the CVC championship, held on April 13-15 in Greenville, Pa. Should the Slugs win out, they will receive an automatic bid to the first-ever NCAA Division III Men’s National Volleyball Championship tournament. Hollenbeck said their Milwaukee trip may be this season’s turning point.“As much as it’s nice to win, it’s not big on our schedule,” Hollenbeck said.  “Next up for us will be Milwaukee. Our results there will really shape the future of our season.”In particular, Hollenbeck anticipates playing a rematch against third-ranked Carthage, which he believes will be their toughest test of the tournament. Carthage is the lone team to win a set against the Slugs since the beginning their streak.

“Carthage is our biggest opponent,” Hollenbeck said. “It was a battle last time. They’re a great program with a lot of talent. This will be a great match to beat them in.”

“No matter what we’ll do, we’ll be champs,” senior captain and setter Paul Leon said. “Playing with this team has been very special to me.”

Despite the recent victories, Hollenbeck is targeting areas for improvement. The coach will focus on sharpening their serves to better meet their challenges. Hollenbeck said improved serving will force opposing teams to counter the Slugs’ blocking and defense, which he identified as key to their victory over Hope International.

“We could definitely improve on our serving,” Hollenbeck said. “We served well, but we are capable of doing better. The more serves in, the more chances we get to use our strengths.”

Captain Leon has been impressed by the team’s chemistry on and off the court. Leon identified teamwork as the reason the team currently sits atop the national polls.

“We have each other’s backs both in the gym and out of it,” Leon said. “We’re not just playing for a team, but for a great school that has supported us so well.” 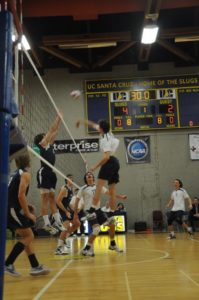 Tsai, who plays in the position of libero, finds the team is making great strides, but shares Hollenbeck’s view that more work is needed to finish as champions. Tsai believes their ranking will be irrelevant without a championship trophy to end the year.

“We don’t worry about that — we just go one point at a time,” Tsai said. “The ranking only matters if we’re No. 1 at the end of the year. That’s what we all want.”

The Slugs will play against University of the Pacific in Stockton on March 23 before entering the MSOE CVC Tournament on March 29.