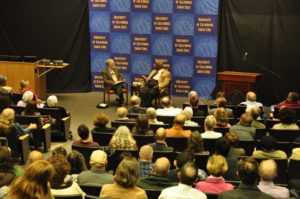 While Oakes College may be situated on the outskirts of the UC Santa Cruz campus, it continues to serve as both a source of support and place of community for underserved and underrepresented students.

A discussion held on April 27 during Alumni Weekend reminded staff, faculty, students and alumni why the legacy of Oakes continues to live on at UC Santa Cruz.

The public discussion was carried out by founding Oakes College provost
Herman Blake — who is the current humanities scholar in residence at the University of South Carolina — and his longtime friend and colleague, UCSC senior lecturer and emeritus in writing, Don Rothman.

Blake and Rothman discussed topics ranging from the founding days of Oakes in 1972, to the presence of students of color and other underserved communities in higher education.

Among the students present at the discussion was fourth-year politics major and Oakes student Fithawi Kudus, who was asking around for a Sharpie so Blake could sign his hat. Kudus and other students in the audience said Blake was a source of inspiration after listening to Rothman and Blake discuss the roots of Oakes College, and sharing memories from the early decades of UCSC.

As a founding member of Oakes College in 1972, Blake sought to increase the presence of students of color in the higher education system and to create a
community on campus that would support marginalized and underserved students.

Blake said Alumni Weekend was a chance for him and his colleagues, who were present on the UCSC campus in its earlier decades, to see the recruitment and support of students of color — all goals set through the founding of Oakes.

“What you saw Friday night was what we hoped for,” Blake said. “Why was it important to me? It was important because it was a dream come true.”

Although Blake said that Oakes was often called “experimental” in its founding, he would not use that word to describe the college.

“Oakes was not experimental,” Blake said. “But, a lot of people used that term, and I objected to the term on the grounds that an experiment meant that, if the situation got difficult, it was expendable. And I never considered Oakes College expendable.”

Blake said many in attendance at the discussion during Alumni Weekend had gone on to careers in professions like law, engineering and medicine, and many worked with the same sectors of society Oakes aims to support — low-income and marginalized communities.

Blake also recognized alumni Victor Cabrerra, who attended the discussion with his family and is now a lawyer. Cabrerra primarily works with clients who identify as undocumented.

“[Victor Cabrerra has] served the communities we hoped for,” Blake said.

Blake has also been a strong proponent of increasing the presence of people of color in the fields of math, science and engineering.

“We live in a world in which science plays a major role politically, economically and intellectually,” he said.

Highlighting the way that Oakes continues its focus on providing support to students of color in the sciences, Blake said Oakes has rooted itself in counteracting and preventing a racist view from prevailing in modern society.

Graduate student Danyale Bell — who is the only black student in the UCSC master’s of education program — and Ogundunyile were recruited to UCSC through Destination for Higher Education, which continues to organize UCSC undergraduates to inform minority high school students about opportunities through university education.

Both Ogundunyile and Bell participated in Destination for Higher Education outreach efforts during their time as undergraduates, something they agree has allowed them to give back to the communities they represent.

“[ACE, Oakes faculty and administration] was my support system … they support you for the decisions you make,” Bell said.

The impact that Oakes has had on students like Danyale and Lon has its roots in the enduring legacy of Oakes. Gregory Brown, a UCSC alumni (class of ’81) and assistant professor of criminal justice at California State University, Fullerton, said his affiliation with Oakes in his undergraduate years had a “profound” effect on his education, and continues to have an impact on him today.

“The big emphasis [at Oakes] is that it’s encouraging people to go outside their comfort zone, to go outside of their racial/ethnic group and try to meet others because there is a richness and diversity there,” Brown said. “All too frequently, society is very ethnocentric … I felt that the Oakes experience was trying to change that. They were trying to create an environment that encouraged people to interact with others different than them.”

Oakes College continues to be a place where students, as well as Oakes staff and faculty from a variety of backgrounds interact and receive support from one another. Ogundunyile and Bell both said that Oakes has shaped their experiences at UCSC in many ways and is a place on campus that feels like “home” — a place of diversity and community.

“I fell in love with [Oakes] … I felt comfortable being in [Oakes] being a math major … Black, and a math major — I learned this over the last five years — [are] not something that ‘go together,’ according to society or whoever,” Bell said. “Being at Oakes, I felt good about my major, it felt good to be in that space and I was welcome … it was like my motivation to keep going.”