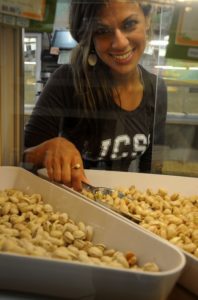 With over 120 varieties of nuts, dried fruits and granolas, Nut Kreations allows you the possibility of creating your own healthy and guilt-free snack, appealing not only to the senses, but the heart. The future is bright for this local Santa Cruz business, which opened its doors a year ago.

Local business owner and Nut Kreations founder Mina Feuerhaken is a Crown College alumna of UC Santa Cruz. Since the store’s opening, it has stirred up a buzz in the community and university.

Feuerhaken is a fourth-generation pistachio farmer who wanted to combine her passion for business with a healthy lifestyle.

“Living in a town that focuses on natural food and a healthy, active lifestyle inspired me to dream into wanting more for my body and soul,” Feuerhaken said. “The professors, students and people I met shared the same life struggles.”

Establishing a successful business as a young and aspiring entrepreneur like Feuerhaken is a challenge that she said takes time and research.

“Research as much as possible,” Feuerhaken said. “You have to jump ahead and find a location, explore your ideas and understand the competition. Know that the first years may be tough. Be prepared to change some aspects. Something may seem exciting, but be flexible and don’t be disappointed to change some things. I got to a point where I had to do this. There is no way in really knowing unless you try.”

Feuerhaken graduated a year early from UCSC in 2006 with a degree in business management economics with an emphasis in accounting. Like many other students, she decided to try out internships related to her degree, but found it difficult to decide what type of career was best.

“I took the ‘normal’ route once I graduated, and I tried to do what most people did by going from one internship to a job, but I was not happy,” Feuerhaken said. “I changed my mind a lot and I realized it was okay to try different things.”

In establishing her own business, Feuerhaken said that taking things slow is no easy task, but it is the best option for students on the verge of graduation.

“I rushed to graduate,” Feuerhaken said. “There are so many internships and honestly, there is no rush. Just absorb all you can.”

Feuerhaken attributes much of her success to people she met at UCSC who fostered the environment she desired in a career.

“UCSC and my professors helped build a great base for me,” Feuerhaken said. “It motivated me to create my own business. It was a space that helped me with dealing with numbers and financial statements. I truly am thankful for the environment that was so helpful, positive, and beautiful.”

Although the future is unknown for Nut Kreations, their plans to expand may be just around the corner.

“We’ve had a lot of interest in franchise,” Feuerhaken said.“It’s definitely in the picture, but just not sure when. I have to say this store is my baby, and like any other baby, you have to nourish it, love it and wait for it to grow. I would like to focus on wholesale more at the moment.”