Traffic Accident at Base 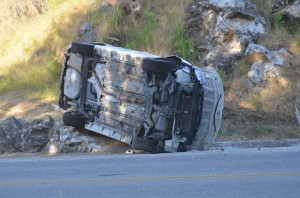 A white sedan crashed into the side of the hill at the base of campus across from the barn parking lot around 5:50 p.m. on May 28. The driver did not appear injured.

Recent American studies graduate Alison Longman witnessed the solo crash from her car on her way to campus. She was driving up to campus when the sedan came speeding up behind her. The driver swerved left around her car and began to fishtail.
While another car headed down from campus in the opposite lane, the white sedan drove up the side of the embankment, flipped a few times and landed upside-down, facing against traffic. The driver climbed out of the backseat window and was walking with no visible injuries, Longman said.
“I feel very lucky he didn’t hit me,” Longman said.