The Student Media Council meets throughout the year to allocate funds to the various student organizations, granted through funding provided by Measures 13 and 34. These funds go toward projects that benefit all of the organizations within Student Media. KZSC Radio is housed in Campus Life, however, representatives attend Student Media meetings as well.

The newly developed www.sctv28.com provides a platform for several Student Media organizations to host their video content on.

Alay is the literary arts journal of the Filipino Student Association.

The Black African Voice showcases art, poetry, stories and news centered around the African-American community at

An annual alternative back-to-school guide released in fall, Disorientation Guide is dedicated to covering topics that often go unpublished in the mainstream media, such as student activism and local issues, as well as many other topics.

EyeCandy is devoted to publishing work on film and other visual arts through articles, essays and reviews.

Fish Rap Live! is the comedy newspaper which publishes every three weeks,  reminiscent in style to The Onion.

The environmentally themed publication created by the Environmental Media Project at UCSC to highlight sustainability efforts on campus.

The Leviathan Jewish Journal is a quarterly publication that publishes articles and artwork pertaining to the Jewish community.

Matchbox Magazine is a UCSC-based literary publication that annually publishes writing and art from each of the UC campuses, and is distributed to each after printing.

TWANAS is a newspaper published each quarter that is devoted to covering voices often underrepresented in traditional media, covering topics such as gender, race and immigration. 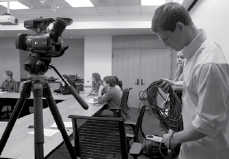 Border Stompers is a multimedia collective dedicated to giving voice to perspectives often unportrayed in mainstream media, using a variety of approaches.

Film Production Coalition is a part of SCTV and produces one feature-length film per year, along with short films throughout fall, winter and spring terms.

On the Spot is a entertainment broadcast organization that produces about five shows each quarter.

Rainbow TV produces and publicizes the creative work of the Rainbow Theater Arts Troupe at UCSC.

KZSC is a non-commercial, educational public radio station, which in 2010 was ranked No. 5 on The Huffington Post’s top nine college radio stations.