You may have heard about the California state budget crisis. It’s an issue that hasn’t gone away since its start in 2008, when Gov. Arnold Schwarzenegger declared a fiscal emergency due to an $11.2 billion shortfall. There’s even a Wikipedia page dedicated to it.

Since the start of this crisis, the state has been reducing the amount of money set aside for higher education.

Despite being an economic powerhouse that produces media, foodstuffs and technology, the state of California spends more than it makes, with a revenue of $88 billion to support a $129 billion budget in 2010–11, according to the Legislative Analyst’s Office (LAO). This discrepancy has forced the state to cut funds to various departments.

UCOP governs the UC system and also decides and implements tuition increases. With the state cutting funds that the UC has depended on for many years, UCOP has made steep increases in tuition and fees as well as budget cuts to the UC system.

According to the Los Angeles Times, only 10 out of the 23 CSU schools will accept any mid-year transfer students in 2013. The 13 schools restricting admission will require incoming juniors to have at least an associate degree, not just community college transfer credits.

One of the major effects of UCSC’s budget crisis has been cuts to academics. Community studies and American studies were effectively suspended in spring 2010 and June 2012, respectively. The suspension limits the majors from taking any new students for at least two years, but it remains to be seen whether they will be reintroduced into the UCSC curriculum.

Also, since 2008, certain academic divisions have sustained large cuts in their funding. The humanities, physical sciences and biology, and the social sciences have all lost over $1–3 million from their budget. While the arts have maintained a steady budget, and engineering has actually had an increase of $0.5 million, UCSC’s funding for the academics in total has dropped 11 percent since 2008.

However, funding for education may see help from taxpayers in the future. 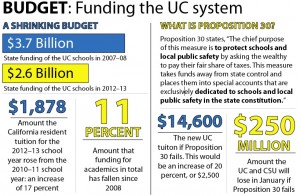 On July 18, the UC Board of Regents endorsed Gov. Jerry Brown’s state tax initiative, Proposition 30, which will be voted on in November.

The initiative, also known as the Schools and Local Public Safety Protection Act of 2012, guarantees cities and counties ongoing funding for public safety programs such as the police and child protective services.

Concurrent with the passage of Proposition 30, the state has agreed to increase UC and CSU state funding by 6 percent every year for four years, starting in 2013. K-12 also stands to gain funds from the passage of Brown’s initiative, with a 9.6 percent increase of about $4 billion for the 2012–13 school year.

On Aug. 21, The San Diego Union Tribune reported that a Field Poll found 54 percent of respondents in favor of Proposition 30 and 38 percent against it.

Although Proposition 30 is not a permanent solution to the budget crisis that has afflicted higher education, Mark Yudof, the president of the UC, said it is a step in the right direction.

“Gov. Brown’s 2012–13 budget package, in tandem with his revenue initiative, contains an implicit deal for UC. It is an imperfect deal, and it is not without risks,” Yudof said on July 18 at the UC regents’ meeting at UC San Francisco. “Still, it is a better deal than we anticipated. And it is our best shot at taking an important step toward the financial stability that this university so desperately needs.”

The regents have discussed budget troubles for many years but have not found an answer beyond increasing tuition and cutting the budget allocated to the individual schools of the UC, which has forced many UC schools to cut academic programs and lay off staff.

“I’m hopeful that if [the ballot measure] passes, we will get a multi-year deal and the university will be on the road to recovery,” Yudof said.

At the July 18 meeting, the UC regents voted on and passed a resolution that promises a tuition freeze for 2012–13, concurrent with increased funding from the state through Proposition 30. If Proposition 30 fails, tuition could go up as much as 20 percent midway through the school year. That would increase tuition by about $2,500, for a total of about $14,600 per year.

If Proposition 30 fails, the UC and CSU will automatically lose $250 million from state funding in January, along with another $125 million that has been pledged for the 2013–14 school year.

“It’s impossible to say with complete precision what the impact would be on any given campus if voters don’t approve Proposition 30,” said Jim Burns, director of public information at UCSC. “But obviously, the fiscal impact would be great, as the UC system would face a projected $375 million budget cut. University leaders have indicated that systemwide fee hikes could follow, as well as additional cuts to programs and additional layoffs.”

Funds raised by the new taxes will go to the UC or CSU system, but indirectly. All revenue from the initiative will be allocated for K-12 education (89 percent) and community colleges (11 percent). But should the initiative pass, Gov. Brown’s revised budget plan states that the UC will gain 3.6 percent more funds for 2012–13 than in the past year.

Some money will then be shifted around from the higher education and K-12 budget to other departments and to pay off debt, although funding to public safety and K-12 education will be sustained.

Should Proposition 30 fail, K-12 education will be forced to cut the school year by about two weeks in many school districts.

“We’re 47th in the nation in per student funding and the United States already has one of the shortest school years in the world,” said Michael Watkins, Santa Cruz County Superintendent of Schools. “We’re trying to ensure that all kids have access to education, but that won’t happen without revenue. I don’t care what your stance is on higher taxes, schools need additional funding.“

According to NoNewTaxes.net — a website paid for by the Howard Jarvis Taxpayers Association, which opposes Proposition 30 — the real issue at hand is California’s overall tax status in the nation. Citing an income tax that is the third highest in the nation, and sales tax that is fourth, as well as money that taxpayers are paying for the creation of a future bullet train (that Californians voted for in 2008), No on Proposition 30 focuses on governmental mismanagement of money and tax policy. No on Proposition 30 describes itself as “Californians for Reforms and Jobs, Not Taxes.“

Among the supporters of No on Proposition 30 are Joel Fox, president of the Small Business Action Committee, and Jon Coupal, president of the Howard Jarvis Taxpayers’ Association. Those backing the proposition have repeatedly argued that Governor Brown is holding education hostage, forcing people to make the decision between increasing taxes or an automatic cut of $5.5 billion to K-12 education and higher education budgets.

“Prop. 30 supporters are asking voters for $50 billion in higher taxes, yet they admit they can’t

even keep track of the money they have,“ Fox said. “Losing millions of dollars and monitoring finances through an ’honor system’ underscores the need for reform, not taxes.“

While it remains to be seen what will happen, the future of the UC and CSU depends on the passage of Proposition 30.

“The schools need more money and the people we are asking can afford it,“ Brown told CBS San Francisco Local News on Aug. 22. “If voters do not pass the proposition, we’ll be shortchanging California’s future.”