At sunset, over 70 students and faculty gathered around the central rock of UC Santa Cruz’s Quarry Plaza. The stone was turned into an altar, next to which stood a picture, biography and flowers. Fifty-one candles encircled the front of the rock to honor the unexpected passing of Aaronette M. White on Aug.14.

White was an associate dean of the Division of Social Sciences and an associate professor of psychology at UCSC. While White was a professor and faculty member, she was also a researcher and beloved campus figure. Jocqui Smollett, co-chair of the African/Black Student Alliance, helped organize the memorial on Aug. 16 and said it was a testament to White’s character how quickly people came together to honor her passing.

“It was really powerful to have undergraduate students, graduate students and faculty all in the same place,” Smollett said. “The fact that Dr. White passed and could bring all of us together in unison, within a week of her passing … Everyone was there for just one cause and that really just speaks to how powerful the impact she had on people’s lives.”

The service included speeches of remembrance from students and faculty. Carolyn Dunn, director of the American Indian Resource Center, sang a combination of Native American songs to honor White.

“The function of these songs is to honor our beloved fallen by singing a Flag Song, to honor the land they fought for, and then to honor them specifically with an Honor Song,” Dunn said in an email. “I chose those two for Dr. White because she truly is a warrior.”

Smollett read messages of students and faculty who were unable to attend, which was followed by a song from Ebony Lewis, associate director of admissions.

In July, White was appointed associate dean of equity and social responsibility at the Division of Social Sciences, to help maintain and increase the diversity of the division. If successful, the plan might have spread to the rest of campus.

As a social psychologist, White did research on gender, feminism and women’s studies, among other subjects.

Smollett said White was a role model for the students and faculty around her. 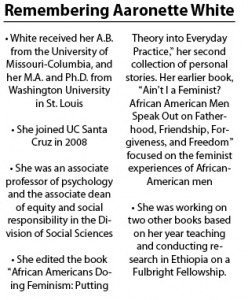 “Being a black person of color, you are part of 2.7 percent of black students [at UCSC], so whenever you have a profound, prominent professor such as Dr. White — these are professors who we look up to, these are professors who we aspire to be. These are black individuals who were once in our position — they have made it to this level and are making such a great impact on people’s lives,” Smollett said. “Unfortunately, there are not many classes available to black Americans about black American life, the black American struggle, or black American history. Dr. White was able to take that black struggle, that black history, and implement it into her classes.”

DT Amajoyi, a former mentee of White, said she was in awe of White’s powerful dialogue on race in her African-American psychology class.

“Being able to see someone in action relaying the message of things as heavy as slavery, oppression and white privilege, to a class of mostly white students … to be able to do that on our campus, which doesn’t have ethnic studies or isn’t necessarily open to talking about topics like that, was amazing,” she said. “Everyone was open because she was very tactful in the way that she did it. You could tell it was well-intentioned.”

Smollett said even though he never had the opportunity to personally meet White, like others at the service, he was greatly impacted by her passing.

“It was incredible,” he said. “The love, the passion — you could just feel it within the whole circle. Everyone was so emotional. People who didn’t even know about her beforehand found out about her life and were crying … I didn’t even know her, but I felt as if my aunt had died.”

Marla Wyche-Hall, director of the African American Resource & Cultural Center, worked with White and said in an email that her passing was a great tragedy to the UCSC community.

“[She was] someone who cared deeply on issues of feminism, someone who wasn’t afraid to push the envelope and engage in “tough” topics of racial inequities and disenfranchised communities,” Wyche-Hall said. “[She was] a person who invested countless hours, time and mentorship in her students, both at the undergraduate and at the graduate level.”

The Student Union Assembly, A/BSA and UCSC’s Ethnic Resource Centers will hold a second memorial on Wednesday, Oct. 3 at the Quarry Plaza at 8 p.m.