Not Your Average Online Marketplace

When you think eBay, you might just think of an online marketplace where you can bid and possibly win goods at cheaper prices. However, eBay has shown that it does much more than that.

On Nov. 12, Neel Sundaresan, the senior director and head of eBay research labs and creator of eBay’s Inspire! scholarship program, led a day-long event at eBay headquarters in Silicon Valley. The event featured special guests and speakers who talked to 14 women from Indiana University and UC Santa Cruz, who received the scholarship.

Officially launched in Feb. 2012, the Inspire! program’s goal is to provide young women with the tools and opportunities to succeed in Science, Technology, Engineering and Mathematics (STEM).

“We chose women based on their financial background and their passion for science and engineering,” Sundaresan said.

Each student was selected based on financial need, SAT scores, an essay submission, school recommendations and overall passion for science and engineering. The scholarship provides $5,000 a year to each recipient for two years. During this time, the women are also given an opportunity for a summer internship at eBay, as well as mentorship by an eBay employee and a student mentor on campus. At the program on Monday, the women met their mentors for the first time.

“Mentoring is really a unique thing,” Sundaresan said. “When we started this idea there was so much interest that we had to hold a competition to choose who would become a mentor. We asked the mentors and the girls to take a survey and then we matched their profiles.” 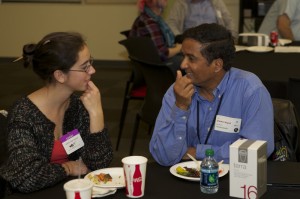 Enrica Beltran, a first-year computer science major from Crown College, is one of the recipients of the Inspire! scholarship. She said Whitney wanted them to focus not on the difficulties facing women entering STEM fields, but on their passions, futures and work in technology and engineering.

In addition to opportunities within eBay and mentorship, the recipients of the scholarship will be provided attendance at the Grace Hopper Celebration conference in October, 2013. According to the Anita Borg Foundation website, the Grace Hopper Celebration conference “is designed to bring the research and career interests of women in computing to the forefront.”

“From research I’ve seen, it looks like more women are going into science, but not enough are going into computing,” Beltran said. “Which is definitely a problem because that’s where all the jobs are evolving — everything is surrounded by computers. The best employers are looking for women, because they bring something different to the table. The best team you can have is creative, and how can you have creativity without diversity?”

Sundaresan said one of the reasons he created the program was because he wanted to do something for students that are disadvantaged.

“I was willing to take money out of my budget to create this program,” Sundaresan said. “We wanted to take someone that doesn’t have the benefits that someone else has, and see them succeed.”

Beltran said her family was hit hard by the 2008 financial crisis, and that the scholarship allowed her to attend UCSC as a freshman this quarter, as opposed to a community college.

“Whether or not I was attending UCSC was in question, just because it’s not the cheapest school to attend,” Beltran said. “This scholarship has definitely changed my path. I feel really lucky to be here.”