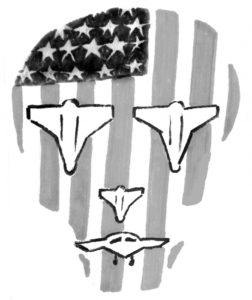 While votes were still being tallied on Nov. 7, The American Civil Liberties Union suggested President Obama halt drone attacks. President Obama has ordered nearly 300 drone strikes during his tenure, six times more than his predecessor, according to NBC News.

Americans may one day regret using drones while other countries — like China, Iran or Pakistan — are in the process of obtaining the technology. The international community needs to regulate drone warfare before their proliferation can get out of hand.

While the current code of international law allows nations to declare war on terrorist groups, members of these groups can be killed only if they act violently against a state. Obama has stretched the law by repeatedly targeting individuals all over the Muslim world, who may only be small time members of terrorist groups, if at all.

International law needs to be updated for the use of remote controlled weapon systems like drones. Remote attacks via unmanned aircraft are currently not considered warfare because boots are technically never placed on soil. International law will most likely be disregarded as drones proliferate worldwide.

Drone strikes cause too many civilian casualties. According to a Stanford and New York University report on drone use, the percentage of “high level terrorists” killed by drones is at an estimated two percent.

This data clearly shows that drones are ineffective, yet because their use is unchecked by the international community, world heads of state can order strikes without fear of repercussion.

President Obama’s record of extrajudicial killings has set dangerous precedent for our next commander in chief. Drones have been used to kill American citizens, some of them harmless, like noted terrorist Anwar al-Awlaki’s 16-year old son.

While drones provide a clear technological advantage for America’s military, the rest of the world is not far behind. In the summer, Mahmoud Ahmadinejad was seen parading on Iranian television with a completely intact drone, while first world countries, like France and the United Kingdom already have drones stocked in their arsenals.

The international community must send a message that this use of technology is off limits for warfare. Like chemical weapons or landmines before it, an outright ban or strong restrictions will prove beneficial for human rights.

The technology also has practical uses. Drones have been used to gather data to optimize grape growing for winemakers, and also have surfaced as flying toys for children. But the fact is, military use is more widespread than consumer use.

American consumer technology may make people’s lives better nationally, but for those living in the Muslim world, this American technology has proven to be destructive. Let’s develop consumer use for drones with restrictions rather than allowing this trend to continue.