A UC Santa Cruz student-inspired and operated “Street Style” blog is throwing students of biology, feminist studies and physics under the same “mind if I take your picture?” admiration.

The self-organized student group has streaked the e-waves of campus — over 500 followers strong — with a staff of several dozen blogging, modeling, photographing and designing contributors.

UCSC Street Style (SlugStyle) is a stream of photos of UCSC students who caught the attention of the photographer of the day — for self-expression, for color wheel adeptness, for a peculiar sock and shoe pairing. Think “The Sartorialist” and “Humans of New York.” The photos go up alongside a smattering of “Trending this Fall” and “To [hair] bang or not to bang?” posts of fashionista wit. 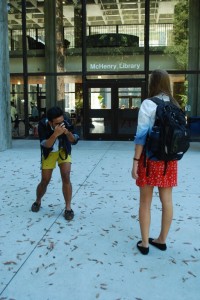 “We’re learning as we go,” said Minassian, explaining that instead of having a constant stream of new material, SlugStyle evolves with every new post — an existence that once bound the group into an unflattering corset.

SlugStyle even got a shout out from the Australian clothing company SurfStitch, which recently featured SlugStyle and went to the length of cloning outfits on the backs of UCSC students, made into complete looks you can assemble from the SurfStitch store.

Early on, some critics commented on the choice of model and style.

“The photos posted so far, for the exception of just a few, only image white women,” said one anonymous comment on the SlugStyle tumblr website in January. “All of the photos, on the other hand, all image very thin women. For a school as socially and politically driven toward liberalism and acceptance as UCSC, I feel that this blog is not very reflective of the common ideologies held by most students.”

SlugStyle responded that the project was still in early development — it would take a little time to reach the goal of celebrating the unique and diverse student fashion on campus.

Co-founder Carlos said he hopes the blog adjusts a myth about successful fashion on campus.

“Fashion became more of an inhibition than something to be part of,” Carlos said, “just because of these rules — I have to be skinny, I have to be tall, I have to wear high-waisted shorts, it has to be thrifted.”

Carlos said such methodology wastes the accessible self-empowerment that fashion can offer.

“What is fashion? The process of putting something that is so 2D, very thin, almost skin like and forming it into a human, and embellishing it with all these cultural attachments,” Carlos said. “As if manifesting our own social relevance.”

SlugStyle, the founders said, isn’t so much about teaching how to dress as it is about allowing us to see dress as an integral, evolving and fascinating aspect of humanity.

“What’s exciting this year is that the group in here is so diverse and beautiful,” Minassian said. “There aren’t really a bunch of skinny white girls who all shop at the same store. Everyone has a really different perspective.”

SlugStyle hopes its continuing ethnography will document student movements through the lens of fashion. SlugStyle member Aurora Kasten, who first stumbled onto the site through the UCSC tumblr tag, said fashion is a balancing act between self-expression, culture and her back pocket.

“The highlight of my day is getting dressed. I really like experimenting with different styles,” said Kasten, whose passion of being “really, really cheap” comes from her mother’s “can’t buy taste” ethic. “I’ve never spent more than $50 on any item of clothing and I’m really proud of that, [but] I won ‘best dressed’ in my high school.”

Kasten sees fashion as a craft to refine and explore.