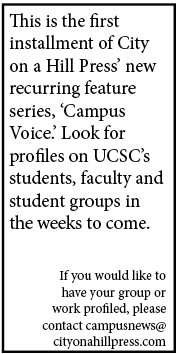 After a nationwide search, Lacey Raak was appointed Director of Sustainability at UC Santa Cruz at the beginning of the quarter.

Raak now finds herself tasked with the job of coordinating and negotiating local sustainability efforts. While she reports directly to John Barnes, Associate Vice Chancellor of Physical Planning and Construction, she must also be an ambassador between the many sustainability efforts of students on campus and the obligations of the university.

But Raak, who also recently became a mother, is no stranger to the world of diplomacy.

“While I was in grad school, I focused on environmental security — or environmental peacemaking, depending on the way you look at it,” Raak said. “I did some research in Indonesia, I lived overseas in the U.K. and the Middle-East, and also in Mexico. I was fascinated when I was traveling and learning all about the international regimes, and how to address these environmental problems that don’t have any borders.”

During her work to improve the health of the Jordan River, Raak witnessed an inspiring collaboration.

“You think of the Jordan River as being biblical—but really, as it exists right now, it’s more like a stream with lots of trash in it,” Raak said. “But they have offices in Jordan, Palestine and Israel, and they all work together. It’s amazing to me. They were all working on a coordinated effort to restore the Jordan River.”

Transitioning to California and UCSC’s sustainable culture has been no less engrossing for Raak.

“Through my work it became clear to me that a lot of impact was happening through a local level,” Raak said.

And when I worked for [the] city of Monterey, it really solidified how real action and real change can happen at a local level. So at UCSC — oh my gosh — you can’t get a more local and hands-on place.”

Raak said UCSC has two main schools of thought regarding student-involvement with sustainability: one which emphasizes learning — including making mistakes — and one which focuses on carrying out existing initiatives, which enables less independence.

“I think they’re both needed. I’m more familiar with working in the second half, and I also work to support functioning-type staff … who work in procurement, in plants, in grounds. Part of my job is getting those two [ideologies] to work together.

Breaking in her new administrative shoes, Raak spent this past weekend away from home at the quarterly inter-organization retreat for the many members of UCSC’s sustainability organizations. This was her second time attending the event, which she said helps to galvanize student sustainability efforts across all of campus.

“We see over time that colleges get to some level of sustainability, and then it stabilizes. Although we’re doing dynamic work [at UCSC], it has stabilized in some respects … we need more coordinated approach — not necessarily at the student level but at the administrative level.”

“Right now sustainability is happening in a lot of little spots — there’s the Sustainability office, the SEC (Student Environmental Center), IDEASS (Impact Designs: Engineering and Sustainability through Student Service), PICA (The Program in Community and Agroecology), the Farm, ESLP (Education for Sustainable Living Program), even individual internships with staff. There are tons of little things, which is wonderful because so much can grow from that. At the same time there is a need for a coordinated approach.”

Raak was not on staff during the initial negotiation and controversy surrounding UCSC’s Long Range Development Plan (LRDP), which would utilize several acres of undeveloped forest in UCSC’s northern territory. She said that the university’s growth obligations and environmental stewardship share a common ground of responsibility.

“When I started my internship in the middle east, [I learned to] always focus on the problem and not on the people. It’s not about Joe versus Mary, or the students versus somebody else,” she said. “If we have to grow, let’s make sure we do it responsibly. That may mean changing policies. We can’t just build a building the way [we] used to.”

A day in the life of Lacey Raak must feel like dismantling a brick wall — if you take a look at her calendar of appointments. But Raak considers herself fortunate.

“I have an amazing staff … it’s tough but it could be a lot worse,” Raak said. “I could hate my job and I could hate being a mother. I love them both.”