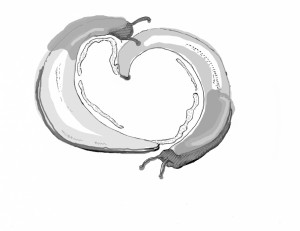 Few married couples commit to bringing their working aspirations home with them. But in the course of trying to change an academic discipline that reports an average 90 percent male student body nationwide, Charlie McDowell and Linda Werner have had their work cut out for them.

The two computer science professors have been married since 1985. They met several years prior at Werner’s going-away party.

“I asked him to dance,” Werner said. “We’ve been ‘dancing together’ ever since.”

Then, McDowell was unaware of Werner’s passion for advancing diversity within the field. It became a shared passion.

But several times a year he convenes with specialists to conduct research, get involved and establish goals to increase women’s participation in the computer science community. McDowell serves with two other co-chairs of the National Center for Women Information Technology’s (NCWIT) Academic Alliance.

“[The Alliance’s] goal is to bring new women to a field that has historically reported a scarcity,” McDowell said.

To accomplish this end, NCWIT’s “Aspirations in Computing” award ceremony highlighted 25 high school female students from the Bay Area for scholastic achievement in computing this year. It was the fourth consecutive annual presentation of the award.

NCWIT’s K-12 Alliance also aims to increase young women’s involvement with technology. The program cultivates a heightened familiarity with programming before applicants reach the college level, a void that remains a stumbling block for many.

Werner is committed to advancing the same goals as her husband, a task she sees as closely related to public perception of the field.

“We need to change the attitudes of youth,” Werner said. “We need to help them see that computer science is as viable and rewarding a course of study as any traditional route.”

Werner works in conjunction with Education, Training and Research Associates (ETR), a local organization that collaborates with middle schools for that purpose. ETR uses a programming language called Alice, interactive software that superimposes objects such as furniture and snow to create visuals in lieu of lines of text.

Programming languages like Alice are designed to showcase the depth and range of computer science without the technical nuances generally required to access them. Werner recently spent time outside of the U.S. as well, promoting awareness of diversity with women of all ages.

“Groups with greater diversity solve complex problems better and faster than do homogenous groups,” Werner said. “Our work is to help youth become producers, not just consumers of technology.”

UCSC reports a marginally higher percentage of women within the computer science major than the national average. McDowell said based on the level of interest she’s seen recently among local youth, that number is headed to new heights.

“Our computer science major has typically had 12 percent women,” McDowell said. “This year we’re seeing upwards of 17 percent proposed in the freshmen class.”

For the man who wrote the university’s “Introduction to Programming” book, McDowell is in a position to gauge the influx more aptly than most.

“I don’t wish to draw the cause and effect,” McDowell said, “but we’re beginning to see results.”

Together, McDowell and Werner work to provide many hands-on opportunities for the advancement of women in computer science, from the classroom to seminars and conferences around the state. When asked the root of their motivation, the couple responded almost identically.

“I would love to look out at the students in my classrooms and see a more diverse population where everyone feels that they understand the material,” Werner said, “And they feel they belong in the class.”